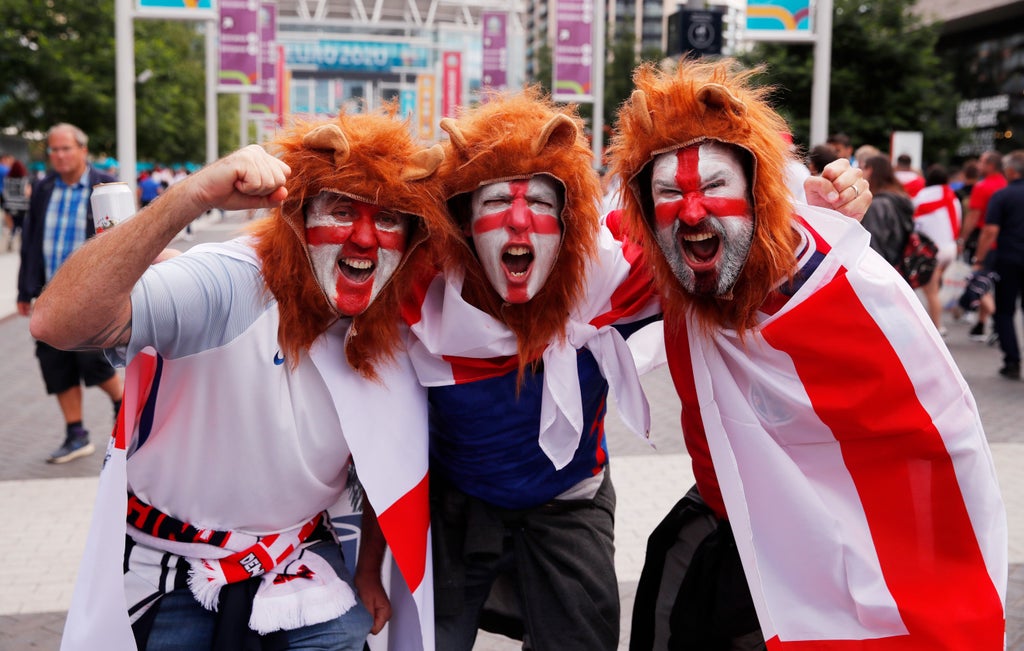 Follow live coverage as England play Denmark for a place in the final of Euro 2020 tonight.

The Three Lions are looking to secure passage to a first major tournament final for 55 years after topping Group D thanks to narrow wins over Croatia and Czech Republic either side of the drab draw with Scotland. They then went on to beat Germany in the last 16 – a first knockout win over their old rivals in nearly two decades – before thumping Ukraine in the quarter-final in Rome.

They now return to Wembley Stadium to face a Denmark team riding a wave of emotional support of a nation back home following the collapse of talismanic midfielder Christian Eriksen in their opening game against Finland. They would go on to lose again, to Belgium, before beating Russia to reach the knockout stages. The big win over Wales in the last 16 was followed by a nervy victory over the Czechs on Saturday to earn their place here.

They, of course, stunned a continent to win this tournament back in 1992 while England haven’t won a major trophy since the World Cup way back in 1966. The winner tonight will go on to face Italy in Sunday’s final. Follow all the live coverage from Wembley Stadium:

England vs Denmark latest: Party atmosphere at Wembley ahead of semi-final

Beer and pyro are spilling out in the air at Wembley as England fans gather ahead of tonight’s semi-final. Joe Middleton has been talking to some Three Lions supporters on their way to watch the match at a pub in London: “Friends Martin Cranfield, 26, and Jake Thomas, 26, are making their way to The Greyhound in Kensington to watch the match and admitted they are nervous. Mr Cranfield, a management consultant who lives in London said: “I think it’ll be close and it’s going to penalties.” Mr Thomas, a researcher from Cambridge, added: “I’m going to be a barrel of nerves all game. It’s going to be a tricky watch.”

Seats are going for five figures on secondary ticketing websites despite UEFA regulations banning their resale above face value.

The high prices reflect the fact that all the tickets released by Uefa to the general public so far have been snapped up.

Two seats at Sunday’s game that will see Italy face either England or Denmark are being offered for £40,000 on the ticketing site Ticombo.

England vs Denmark latest: A look back at the Three Lions’ previous semi-finals

England have been through some heartbreaks since reaching their last final in 1966 but Gareth Southgate and his players have the chance to make their own history tonight against Denmark.

How many can you remember?

England vs Denmark latest: ‘Wembley is buzzing’ with three hours to go

The first, and certainty not the last, rendition of ‘Sweet Caroline’ is ringing out around Wembley Way, with three hours to go until kick-off tonight.

The Neil Diamond classic has been a hit with England supporters throughout the tournament and is set to be belted out across the country this evening.

“Southgate, you’re the one”

It might not pack the same punch as ‘Three Lions’ or be as painfully catchy as ‘Vindaloo’ but England fans are still loving Atomic Kitten’s new football anthem.

The noughties’ sweethearts have now officially released their remix of 2001 single ‘Whole Again’, in time for tonight’s historic semi-finals clash with Denmark.

What’s that old love song got to do with the beautiful game, you ask? Why, they’ve substituted some of the lyrics to give it a “Euros 2020 twist”, of course.

England vs Denmark latest: Should we be worried about the ‘ITV Curse’?

In case you haven’t heard, tonight’s match will be shown live on ITV, which should carry some caution for fans.

Since 1998, England have won just four matches in 90 minutes that have been broadcast on ITV. Overall, before Euro 2020, England has lost nine matches on ITV and drawn 11. In comparison to the BBC, England’s record reads as Won: 14 Drawn: 3 Lost: 3. This gives England an impressive 70 per cent win rate on BBC, whereas on ITV it is a paltry 16.67 per cent.

England vs Denmark latest: It’s getting loud in central London

Here’s another update from our roving reporter Joe Middleton:

“Despite it still being three and a half hours until kick-off central London pubs are already filling up with England fans. In Leicester Square chants are near-constant from a nearby pub where hundreds of supporters are congregating.

“England defender Harry Maguire, who scored a header in the last game against Ukraine, is a popular subject of the ubiquitous shouting.

“On the streets hundreds of people are adorned with England scarfs, shirts and draped in the flag of St George. Queues have not yet started at the Fan Zone at Trafalgar Square but hundreds of staff are primed at the entrances ready for their arrival.”

England vs Denmark latest: Opposition fans get ready for semi-final

It’s not just England fans who are getting excited ahead of tonight’s semi-final. Over in Copenhagen, the Danes are out and adding a splash of red to the pre-game build-up.

Denmark have proved throughout the tournament that their supporters are some of the most passionate and vocal around, particularly during the group stages when they played three matches in Copenhagen.

England will provide the majority of fans at Wembley tonight as coronavirus-related travel restrictions prohibit Danish fans from travelling from Denmark to England for the semi-final, but up to 5,000 Danes living in England are able to attend the crucial fixture.

England vs Denmark latest: Harry Redknapp has say on semi-final

Former Tottenham manager Harry Redknapp is expecting England to have a much harder challenge against Denmark tonight than the Three Lions had against Ukraine in the quarter-finals.

Gareth Southgate’s side advanced to the last four in style when they thrashed Ukraine 4-0 in the previous round, but Redknapp has warned that Denmark have “real quality” will pose a threat at Wembley this evening.

“It’s going to be a very tough game tonight,” Redknapp said. “They’re a very good team with some outstanding players who play in our Premier League every week.

“Kasper [Schmeichel] is an incredible goalkeeper and they’ve got defenders who play in the Premier League and a midfielder [Pierre-Emile Hojbjerg] who plays for Tottenham and some real quality in their team.

“But I do think England have been in fantastic form and on the back of Saturday’s result against Ukraine we should be feeling very confident.

“Tonight should be a much tougher game but I think we’ve got enough to just about win the game.”

England vs Denmark latest: Fans gear up for Euro semi-final

With just hours to go until kick-off, England fans are gearing up for tonight’s huge Euro semi-final clash against Denmark.

By lunchtime some had already arrived at Wembley, northwest London, to soak up the atmosphere. Others were filling up pubs and big screen parks up and down the country, as the team puts in some final prep before taking to the field.

Independent reporter Joe Middleton was out in central London where he caught up with England fan Peter Robinson, 60, from Surrey, who was enjoying a swift pint with his three sons before they all head out to Wembley.

He expects England win 2-1 and make it to the final. “It’s now or never, we’ve got home advantage, haven’t conceded a goal yet and there’s a real good buzz in the squad,” he said.

Peter Hopton has tickets for Wembley tonight and is bullish about England’s chances. The 40-year-old who he lives in Somerset and works in construction said: “I think England will win by two goals. I’ve come from Somerset today for the game and I’ve got tickets for Wembley later. Harry Kane will get both goals.”

Mr Hopton is so confident of England’s chances he purchased tickets for the final before the Germany victory. He added: ‘It’s not going to be an easy game but I think England will make it to the final.’ 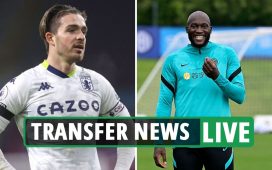 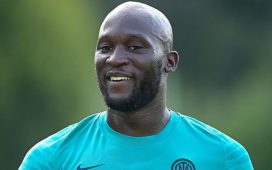 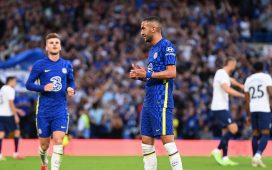 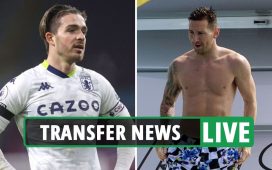 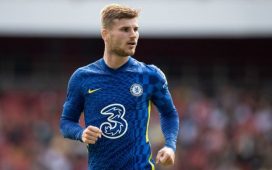 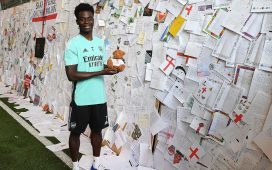