Elon Musk has said that Bill Gates “has no clue” about electric vehicles, following the Microsoft’s founders disparaging comments in a recent blog.

In a post last month, Gates said he was not confident in the development of electric transport.

“Even if we develop cheap, long-range EVs that are powered by zero-carbon sources, electrification isn’t an option for many types of transportation”, he wrote.

Gates’ criticisms are due to the size and weight of the batteries.

“Even with big breakthroughs in battery technology, electric vehicles will probably never be a practical solution for things like 18-wheelers, cargo ships, and passenger jets. Electricity works when you need to cover short distances, but we need a different solution for heavy, long-haul vehicles”, Gates said.

Gates instead proposed biofuels as a viable alternative, and said that electric vehicles would be great options for personal cars, buses, and city lorries.

He praised companies including GM, Ford, Rivian, and Bollinger, but did not mention Tesla once in the post.

On Twitter, when asked by a user about Gates’ thoughts, Musk was more succinct: “He has no clue”.

He has no clue

Tesla is making an electric truck, the Tesla Semi, which was announced in 2017.

It was expected to be shipped to customers in 2019.

Instead, Tesla said it will be brought to “volume production” this year.

“My conversations with Gates have been underwhelming tbh,” he wrote in response to a Twitter user who alerted him to Gates’s decision.

Import duty: A guide to buying your next used car from abroad 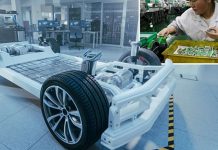 China has a stronghold on the lithium-ion battery supply chain

Is the Ferrari SF90 the future of the supercar?