“So it’s kind of like a game of chicken going on there. He was going to go to Atletico Madrid, as we know Atletico Madrid have serious issues obviously with the salary cap in La Liga, they have to move other players out.

“I don’t think he’d be a bad option for Chelsea.

“In fact I was speaking with a former Chelsea executive who made the point that Tammy Abraham is phenomenal but he’s played so much football, he’s carrying so much pressure, that maybe an impact striker, who could score goals regularly for you, take some of the pressure off him, allow him to grow and develop so that he could come back stronger and once again be the No 1 striker next year, would make sense. 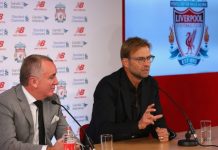