Scientists have created hair dye from synthetic melanin that mimics natural hair colours and reduces the risk of allergies.

Their synthesised dye, which ranges from blonde to black, combines enzymes from mushrooms – which are rich with melanin – with an amino acid to mimic melanin produced naturally in the body.

Melanin – a natural pigment that gives skin, hair and eyes a dark colour – is in every type of organism, making it a readily available and versatile material.

Synthesised melanin is less toxic than chemicals currently used to strip hair of its pigments before recolouring, which can cause skin irritation.

It could also provide an alternative for people with an allergy to hair dye who still want to be able to touch up their roots. 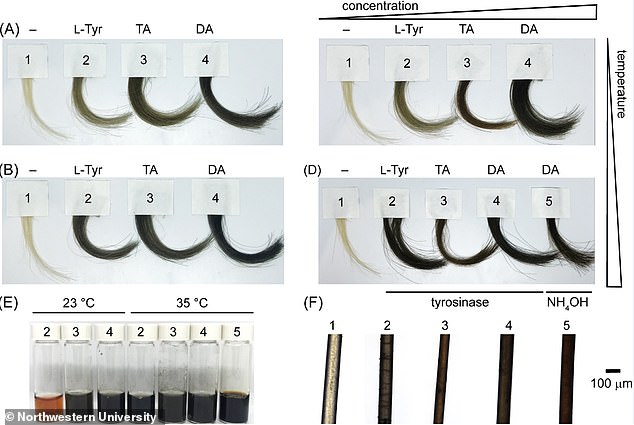 ‘From a biomedical perspective, there’s a huge market of people with a hair dye allergy,’ said Nathan Gianneschi at Northwestern University in Illinois.

‘Our first thought was it would be great to have a solution to help those people.’

– Synthetic melanin avoids the use of ammonia as a base layer.

– The precursors to treating hair with melanin are less toxic.

– There is vast potential in future cosmetic translations of synthetic melanin.

In the typical process of colouring hair at the salon, stylists use bleach to strip melanin from hair, then add ammonia and dye to open and penetrate the hair cuticles.

READ  China moon rover 'Jade Rabbit' gets back to work

Replacing melanin instead of removing it as a way of depositing colour on the surface of hair could create a more sustainable way to create lasting colour.

In humans, melanin acts as a defence mechanism against UV-ray sun damage, which is why people from hotter climates tend to have darker skin.

‘In humans, it’s in the back of our eye to help with vision, it’s in our skin to help with protecting skin cells from UV damage,’ said Gianneschi.

‘But birds also use it as a spectacular colour display – peacock feathers are made of melanin entirely.’

As well as being a milder process than traditional dye, coating hair in synthetic melanin also has the potential to protect hair from sun damage, which can cause whitening.

Researchers said they can achieve an array of colours, from light to dark by changing the concentration of their synthetic melanin.

The product would be in the form of a dye and would be applied in a similar way to usual hair colour, as a paste from a bottle.

Preliminary studies have also revealed potential for the coloured melanin layer to persist through several washes. 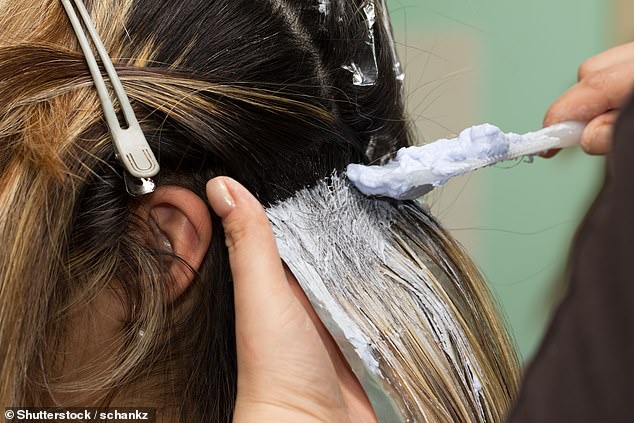 In the typical process of colouring hair, stylists use bleach to strip melanin from hair, then add ammonia and dye to open and penetrate the hair cuticles for permanent colour

‘The dyeing process is similar from a stylist’s point of view, but these conditions are milder, so they take a little longer,’ said lead study author Claudia Battistella.

‘Though it could be combined with a base, it’s not necessary to use one, and there is no need for chemical pigments.’

And because we already have melanin in our bodies, researchers think it is unlikely people would have an allergic reactions to it.

Traditional hair dye, on the other hand, is estimated to cause allergies and skin irritation in an estimated 1 per cent of humans.

Repeated use of some dyes has been linked to cancer – last year, researchers found women who regularly used permanent hair dye over eight years were 9 per cent more likely to develop breast cancer, compared to those who hadn’t. 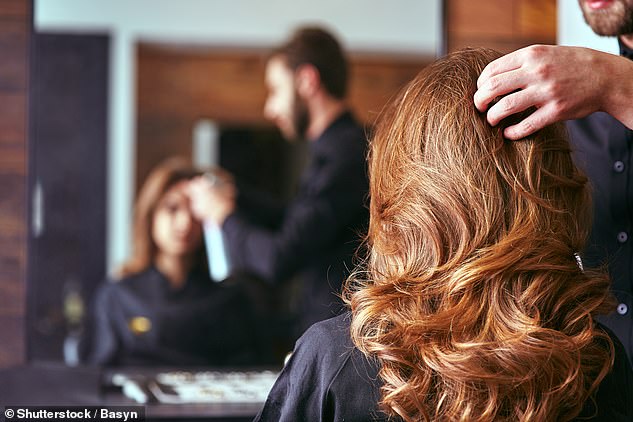 And those who had a chemical hair straitening treatment every five to eight weeks had a 30 per cent higher risk.

The researchers warn chemicals are able to get into the skin through the scalp and fumes may also be inhaled while applying the dye.

Given the industry’s desire to move away from carcinogens and other toxic chemicals, synthetic melanin should be able to break through the regulatory industry, the experts believe.

They now aim to find a commercial partner willing to develop the dye on a larger scale and bring it to shops worldwide.

The research has been published in the journal Chemistry of Materials.

WHAT EVIDENCE IS THERE THAT HAIR DYE CAUSES CANCER?

Researchers have been studying a possible link between hair dye use and cancer for many years with inconclusive results.

Some chemicals in hair dyes can be absorbed in small amounts through the skin or inhaled from fumes in the air.

READ  The robot that can see! New AI that can inspect an unfamiliar object and pick it up

Some of the ingredients used in hair dyes have been shown to cause cancer in lab animals, but it’s not clear how these results might relate to people’s use of hair dyes.

Although studies have shown that some of the dye applied to an animal’s skin is absorbed into the bloodstream, most have not found a link between skin application and cancer risk.

Some human studies show people who work around hair dyes regularly as part of their jobs, such as hairdressers, stylists, and barbers, are likely to be exposed more than people who just dye their hair on occasion.

A small but fairly consistent increased risk of bladder cancer have been found in people in those jobs, and findings have been mixed for studies into leukemias and lymphomas, the American Cancer Society says.

The International Agency for Research on Cancer (IARC) has concluded that workplace exposure as a hairdresser or barber is ‘probably carcinogenic to humans,’ based on the data regarding bladder cancer.

The National Toxicology Program (NTP), formed from parts of several different US government agencies, has not classified exposure to hair dyes as to its potential to cause cancer. However, it has classified some chemicals that are or were used in hair dyes as ‘reasonably anticipated to be human carcinogens’.