Dwayne Johnson has described Kevin Hart as a “lucky man” after his horror smash just over a week ago.

Johnson had cut short his honeymoon to be by the side of Hart in hospital and then to step in on the premiere of The Kelly Clarkson Show, replacing Hart as the main guest for the first show.

He then gave an update on Hart’s wellbeing after he fractured his spine in three places, following an accident on Malibu’s Mulholland Highway.

Johnson said about Hart: “Everything is good, I spoke with Kevin, I actually refer to him as my son. I connected with him today.”

“And you know what? These things happen in life and thankfully he was strapped in nicely to his car seat.”

Johnson’s joking went down well with the audience and as they laughed, he added: “That’s real love.”

With Hart unable to be there at the show, Johnson said he was “bummed” at missing out.

He continued: “I love the guy, he’s one of my best friends. And honestly, I mean, thank God, it could’ve been a lot worse.

“So, he’s a lucky man, and he knows it too. I wish him the best and a speedy recovery and I’m gonna see him soon.”

Hart is said have taken “baby steps” in his recovery and is now slowly walking again.

He is said to be still suffering excruciating pain as he recovers from the sickening car crash that left him with a fractured spine.

The Bachelor alum and Army veteran Jubilee Sharpe, 28, is arrested for a DUI in Florida 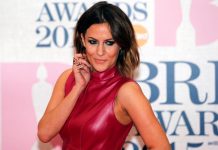