After a week of mayhem, the roads of Kent are eerily deserted, almost devoid of freight traffic as lorry drivers from all over the EU avoid Dover and the Eurotunnel as the Brexit transition period ends.

The only reminder of the potential for Brexit chaos are the miles and miles of detritus – plastic bottles, shopping bags, and even towels – strewn along the banks of the southbound M20 motorway to the cliffs of Dover.

The government modelled plans for up to 7,000 lorries stuck in Kent in the wake of Brexit trade barriers going up at 11pm on the EU side of the channel. But all the evidence suggests importers have done their stockpiling and will be avoiding the port as the UK’s 30-year membership of the single market abruptly ends.

Just a trickle of lorries entered the Eurotunnel, and there seemed to be fewer than a handful heading to Dover early on Thursday evening.

Eurotunnel said traffic was usually quiet around new year; it was exceptionally so this year because so many importers had rushed to bring supplies in before 1 January, hence the heightened levels of traffic brought to a halt when the French slapped a Covid travel ban on freight just before Christmas.

Rod McKenzie, policy director at the Road Haulage Association (RHA), said: “I don’t think we will start to see things getting back to normal levels of traffic until the second week in January. Even then I think the real chaos is going to be invisible chaos.

“People don’t know what paperwork they have to fill in, haven’t dealt with customs declarations before, and if they don’t get that filled in properly, they don’t get the Kent access permit to travel into the county, so they will be stuck at depots and distribution centres around the country.”

The Kent access permit, KAP, or “Kermit” as it has been dubbed, is mandatory for all drivers wanting to cross the Channel after 11pm on 31 December.

Officials said that so far only about 450 of these 24-hour permits had been issued. The slow take-up was feeding fears that there could be a partial repeat of the pre-Christmas chaos with lorries halted or told to turn back if they do not have the Brexit passport in the coming weeks.

Drivers without a permit could be pulled over by the Driver and Vehicles Standards Agency using automatic number plate recognition and potentially fined £300, the officials said.

The concerns have been echoed by the RHA, with estimates that 50% or more of small- to medium-sized companies might not be ready for the border checks, which could raise the prospect of chaos later in January as supply chains become forced out of Brexit hibernation.

In Ashford, just a few miles north of Dover, the hum of construction continues into the night on the 66-acre lorry park destined to be a holding pen for more than 1,000 vehicles.

Many people in the area are mourning the loss of the fields and their environmental benefits.

“The downs on the left and the vale on the right – you could walk right through to Mersham village. It was lovely to do on a summer’s evening, but obviously the government had other ideas,” said Hugh Tyman, who was walking his dog, Willow, at a small housing estate on the other side of a dual carriageway separating residents from the lorry park.

Did he vote to leave the EU? “I did support it, but we weren’t told enough about how it would work by the politicians. Now they’ve done the deal and we don’t know the ins and outs of it either. I probably wouldn’t vote for it now that I know about all the paperwork, and the travel rules changing,” he said.

Another local in a country cottage on a former rural lane shouldering the vast site was also upset and said she hoped to get compensation. “My daughter grew up looking over cornfields,” she said. “There is just a constant drone of generators and it won’t stop after construction because the refrigerator lorries will have their generators on all night. The construction workers had four days off over Christmas –it was just lovely.”

Down the road, John Lang and his wife, Cherylynn, thought they had bought a rural idyll to retire to when the Guardian first told them about the government acquisition in July. Like the rest of the residents, they said, there was no warning or consultation on the lorry park.

They lost their 360-degree view of farmland and now look out on a pine-yellow four-metre-high perimeter fence at two sides of their house. “It’s like living in a compound, it’s hideous,” said Cherylynn.

John voted for Brexit and said he was optimistic about the future but did not think it would do much for Kent, which voted to leave the EU. “I can’t see what the benefit for us here in Kent is,” he said. He said that lorries were now accidentally coming down his country lane “because the postcode is the same as the lorry park”. He hoped ultimately it would be sorted out.

Stewart Wickham, a bus driver, was delighted that a trade deal had been reached because it meant the international driver permit lottery would no longer threaten his livelihood.

“I’ve just taken the GB hockey team over to Brussels and Amsterdam, and next week we find out if we are taking to them to their winter training ground in Malaga. If there wasn’t a deal, I would have been able to do that,” he said. 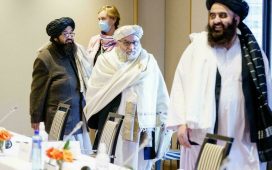 Ukraine’s independence must be supported by Britain | Letters