Manchester United snatched a 2-1 win against Villarreal with yet another moment of late Cristiano Ronaldo magic – but one man in Old Trafford wasn’t happy. Donny van de Beek evidently wasn’t best pleased at being snubbed yet again for the Red Devils, and aired his frustrations at not being subbed on after cameras caught his reaction.

Van de Beek has been a bit-part player for United ever since his £40million move from Ajax last summer.

A key member of the great Ajax side which reached the semi finals of the Champions League in 2019, big things were expected for the Dutchman upon his arrival.

Yet with just three appearances this season, he will be wondering where it has all gone wrong for him in Manchester.

Fred and Nemanja Matic have arguably fared worse than him whenever he has played, and that in itself is enough reason for Van de Beek to star in the first team.

But with opportunities scarce, and with Fred coming on ahead of him tonight, the Netherlands international brought his angry side out.

A video has surfaced on Twitter of Van de Beek shaking his head and looking inconsolable as Fred and Jesse Lingard take the pitch ahead of him.

As justified as Lingard’s inclusion was after some brilliant form of recent, Fred being given the nod was contentious.

The United bench aimed to console Van de Beek after yet another snub from boss Ole Gunnar Solskjaer.

But the Dutchman seems to have had enough in Manchester, and a move in January could well occur.

Solskjaer refused to rule out a role for Van de Beek in the future in an interview at the start of the month.

Having signed him from Ajax just twelve months ago, there is obviously still an interets from the United boss in the midfielder.

“He has worked really hard. He’s waiting to be unleashed and to show what he can do.

And Van de Beek made his plea earlier in the season in an interview with the FIVE YouTube channel.

“I think I can do but of course I don’t know what the manager thinks and what he expects for me,” he said.

“I have played this role before at Ajax. Of course by the end I was playing no.10 but I play also a few games as no.6 – so yeah, I think I can play in this role as well.”

United continue their Champions League campaign against Atalanta next, with a home tie against the Italian side in late October. 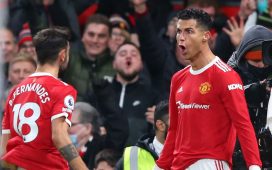