Doggerland: Lost ‘Atlantis’ of the North Sea gives up its ancient secrets


The idea of a “lost Atlantis” under the North Sea connecting Britain by land to continental Europe had been imagined by HG Wells in the late 19th century, with evidence of human inhabitation of the forgotten world following in 1931 when the trawler Colinda dredged up a lump of peat containing a spear point.

But it is only now, after a decade of pioneering research and the extraordinary finds of an army of amateur archaeologists scouring the Dutch coastline for artefacts and fossils, that a major exhibition is able to offer a window into Doggerland, a vast expanse of territory submerged following a tsunami 8,000 years ago, cutting the British Isles off from modern Belgium, the Netherlands and southern Scandinavia.

The exhibition, Doggerland: Lost World in the North Sea, at the Rijksmuseum van Oudheden (National Museum of Antiquities) in Leiden, southern Holland, includes more than 200 objects, ranging from a deer bone in which an arrowhead is embedded, and fossils such as petrified hyena droppings and mammoth molars, to a fragment of a skull of a young male Neanderthal. Studies of the forehead bone, dredged up in 2001 off the coast of Zeeland, suggests he was a big meat eater. A small cavity behind the brow bone is believed to be a scar from a harmless subcutaneous tumour that would have been visible as a lump above his eye.

But while the last decade has seen a growing number of expensive scientific studies, including a recent survey of the drowned landscape by the universities of Bradford and Ghent offering further clues to the cause of its destruction, it is the work of “citizen scientists” that has produced some of the most exciting artefacts, allowing a full story now to be told, according to Dr Sasja van der Vaart-Verschoof, assistant curator of the museum’s prehistory department.

Manmade beaches constructed from material dredged from the sea as part of efforts to protect the modern coastline from the impact of the climate crisis have provided a trove of once-inaccessible treasures from a world inhabited for a million years by modern humans, Neanderthals and even older hominids known has Homo antecessor.

“We have a wonderful community of amateur archaeologists who almost daily walk these beaches and look for the fossils and artefacts, and we work with them to analyse and study them,” said Van der Vaart-Verschoof. “It is open to everyone, and anyone could find a hand axe, for example. Pretty much the entire toolkit that would have been used has been found by amateur archaeologists.”

One such find is a 50,000-year-old flint tool that has a handle made from birch tarpitch. Discovered in 2016 by Willy van Wingerden, a nurse, it has helped update the understanding of Neanderthals – once thought to be brutish and simplistic – as capable of precise and complex multi-staged tasks. A drawing in the exhibition imagines this sharp tool was used as a razor by one to shave another’s head.

Other finds include human skull fragments with cut marks possibly caused by defleshing, believed to have been part of the burial ritual, and remains such as a hyena’s jaw that simply washed up in front of Van Wingerden during a stroll on a beach near Rotterdam six years ago. The wide open grassy plains of Doggerland were the ideal grazing ground for large herds of animals such as reindeer who were prey for the cave lions, sabre-toothed cats, cave hyenas and wolves, among others.

Doggerland – named by University of Exeter archaeologist Bryony Coles in the 1990s after the Dogger Bank, a stretch of seabed in the North Sea in turn named after the 17th century “Dogger” fishing boats that sailed there – is believed to have been subsumed about 8,200 years ago following a massive tsunami.

Sea levels during the last ice age were much lower than today but a catastrophic wave was generated by a sub-sea landslide off the coast of Norway.

“There was a period when Doggerland was dry and incredibly rich, a wonderful place for hunter gatherers,” said Van der Vaart-Verschoof. “It was not some edge of the earth, or land bridge to the UK. It was really the heart of Europe. There are lessons to be learned. The story of Doggerland shows how destructive climate change can be. The climate change we see today is manmade but the effects could be just as devastating as the changes seen all those years ago.”

A virtual tour of the exhibition Doggerland: Lost World in the North Sea, which will be physically available to visit until 31 October, can be viewed on the Rijksmuseum van Oudheden’s YouTube channel 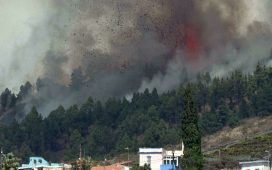