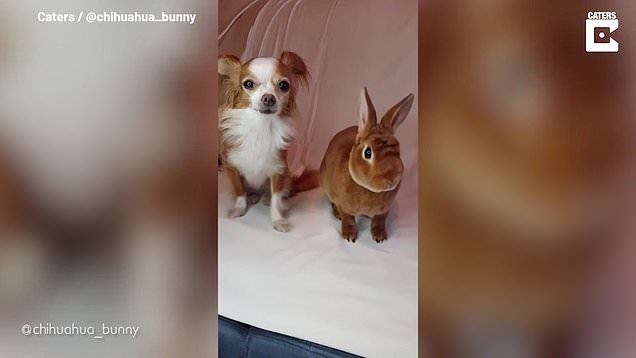 Meet one of the world’s cutest double acts; a bunny and a chihuahua who love nothing more than dressing up.

They have a wardrobe of 150 outfits, and are so pampered that they get a massage every evening before bed.

Owner Sara Zavrsnik, 26, first got Wilson, a two-year-old mini rex rabbit, when her adorable seven-year-old chihuahua, Kala, was five-years-old – and has watched their friendship blossom ever since.

Sara, who is currently a university student, loves documenting their life for the pets’ 2,500 Instagram followers, posting pictures of the pair in jewellery, clothing, accessories and shoes.

The duo are regularly pictured dressed up going out on walks together and exploring new places.

Owner Sara, from Slovenia, said: ‘I love animals so much and my entire life revolves around them – I got my chihuahua when I was 18-years-old and my rabbit in 2018 for Christmas.

‘When I first got Wilson, I was nervous they would not understand each other, but I knew I wanted them to both to be able to roam around the entire apartment.

‘I started bonding him with Kala two days after getting him and they got on straight away – they played with the toilet roll together, slept next to each other, ate together and became best friends.’

Sara even takes them with her on trips, for coffee. or to the seaside.

‘My friends encouraged me to start an Instagram account for them and I didn’t use social media much at that time but she convinced me and it’s spiralled from there,’ she said.

‘The reaction from people was unimaginable – people liked the pictures so much that I just kept on going.’

She says people began asking about litter training a rabbit, so Sara now uses her account to promote cage-free bunny ownership and help others look after their own pets.

And it’s clear to see how loved the pals are, with Sara adding: ‘Kala is so sweet, gentle and very smart – she loves adventures and car rides.

‘Wilson is dominant and requires petting all the time but he’s very kind and loving.

‘You really never get bored with these two – they always do something to make you laugh or brighten your day#.

Owner Sara claims her pets have more clothes than her as she has spent months building up their individual wardrobes filled with different outfits.

She explains: ‘I think Kala and Wilson are the most spoiled pets.

‘They have several luxury beds in each room and both sleep in my bed at night.

‘I almost always massage them before bed so they get a good night’s sleep.

‘They have at least 150 outfits with lots of shoes, hats, jewellery and accessories – I can easily say they have more clothes than me!’

Who could say no to those puppy dog (and bunny rabbit) eyes?


MORE : The most popular summer-inspired baby names, from August to Sunny 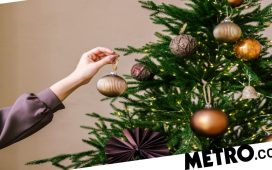 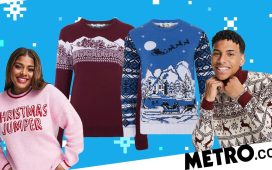 The pandemic body: how the Covid era changed us – from hair loss to weight gain 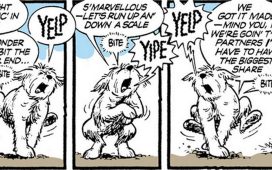