'Doctors said I'd have a coronary': Masterchef's Gregg Wallace discusses his health overhaul


He famously lost four stone after overhauling his lifestyle and Masterchef star Gregg Wallace has revealed doctors said he would ‘definitely have a massive coronary’ if he didn’t change his ways.

Speaking to Mail On Sunday, Gregg revealed he’s the happiest he’s ever been with wife Anna, 21 years his junior, son Sid 20 months, and also detailed his extraordinary craving for order.

Addressing his health overhaul, he said: ‘I had enormous cholesterol. The doctor rang me seven years ago and said: “We’ve got to sort this out right now or you will have a massive coronary”.’ 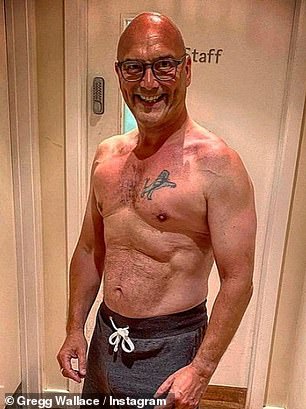 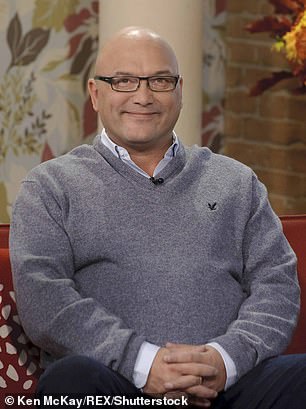 ‘Doctors said I’d have a coronary’: Masterchef’s Gregg Wallace, 56, discussed his health overhaul and revealed he is ‘the happiest he has ever been’ with wife Anna, 34

Now Wallace goes to the gym with his personal trainer seven days a week and he said: ‘I am pretty fit now but my belly bloats. I am twelve stone and less than eighteen percent fat, but my belly bloats so everyone just thinks my diet is bad or I drink loads of beer. I don’t.’

Gregg said he ‘didn’t know a happy home’ like his could exist with fourth wife Anna, 34, and son Sid, who he schedules time with in his diary, along with reading time.

Happily living in a big house in the Kent countryside, he said: ‘I love my life. My home life is just more fabulous than it has ever been.’ 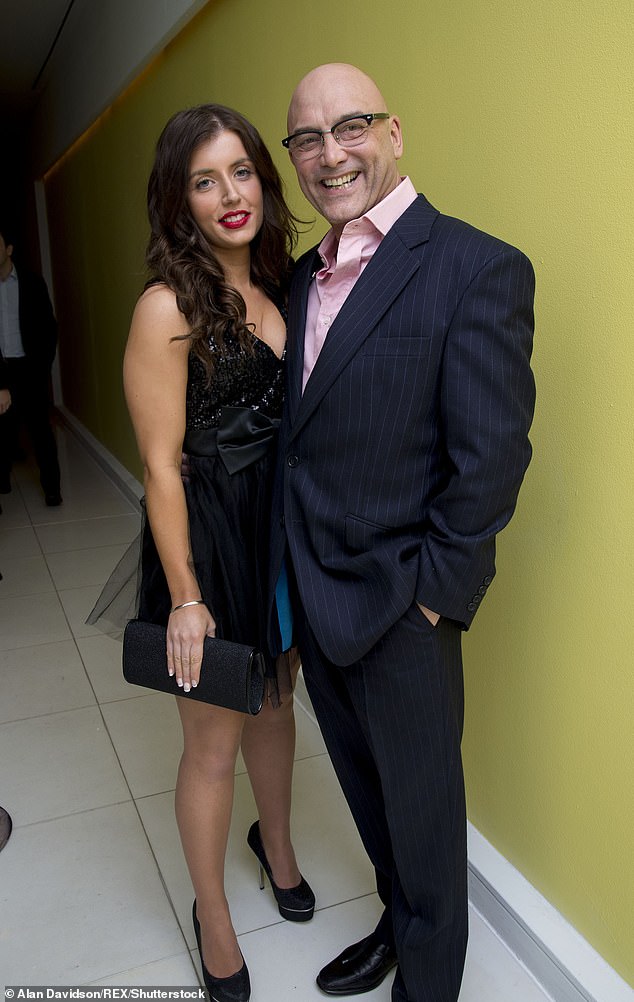 Finally happy: Gregg said he ‘didn’t know a happy home’ like his could exist with fourth wife  of four years, Anna, 34, and son Sid (pictured in 2013)

It’s well-known that the family share the home with Anna’s mother and father Rina and Massimo, who hail from Naples and Sicily via Coventry.

After a series of disastrous relationships, Wallace has finally found happiness with an ultra-traditional wife who does everything for him.

He said: ‘My wife says: “If it happens inside the front door, it’s my responsibility.” I’ve never had a home life like this before. I didn’t know people like Anna existed, but there’s also the mother-in-law as well. 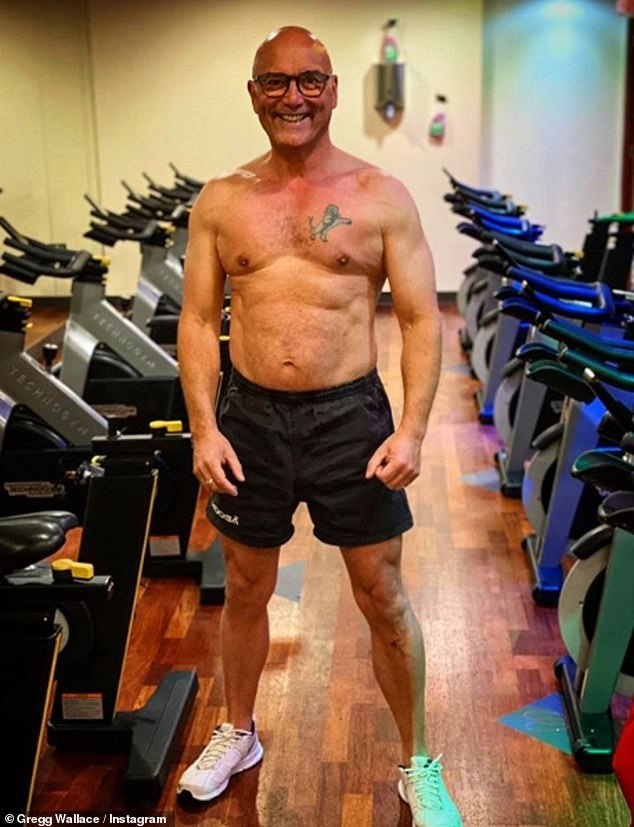 Looking good: Now Wallace goes to the gym with his personal trainer seven days a week and he said: ‘I am pretty fit now but my belly bloats. I am twelve stone and less than eighteen percent fat, but my belly bloats so everyone just thinks my diet is bad or I drink loads of beer’

‘When they know what nights I am going to be home, they send me menus so I can choose my dinner. I get home and my mother-in-law comes and takes the laundry from my car.

‘It’s an extraordinary thing and these ladies don’t, in any way, consider their role to be secondary. They say they’re doing the other half of the job.

‘My father-in-law has moved in now. He’s doing most of the cooking. He had quite a poor upbringing, they cooked on flame. He cooks squid and rabbit on a barbecue better than I’ve ever seen anybody do on a hob. I just love these people. This home is just working so, so well.’

Gregg is keen to stress that Anna has chosen this role for herself and he did not impose it on her. 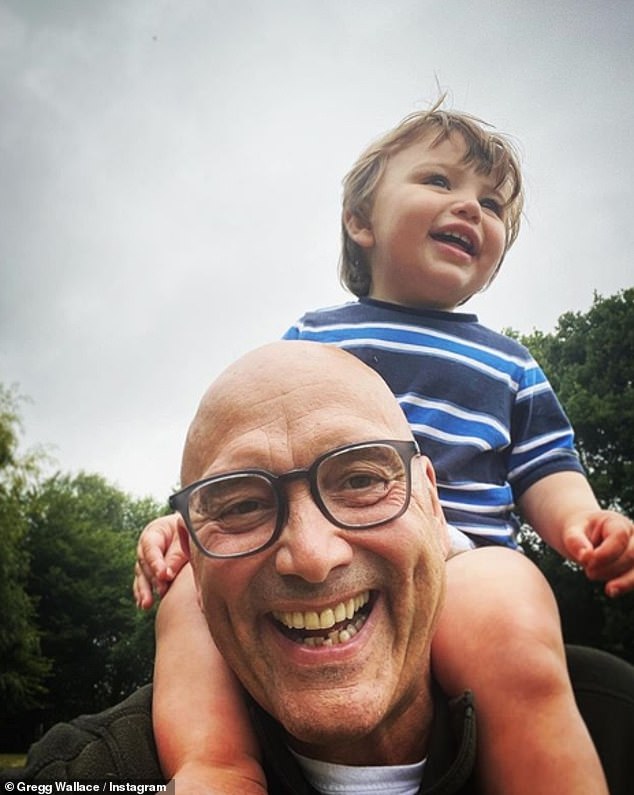 That’s my boy: Gregg said he feels as though he is not around enough for baby Sid but it is important to him to ensure the family have financial security

He said: ‘Listen, I didn’t make Anna into this. It’s who she wants to be. She wants to be a housewife, a mum and a wife. I think you need to see me and Anna together to understand.

‘I like looking after Anna but I’m not promoting my wife’s lifestyle. If my daughter, [Libby, 23], decided she wanted to find somebody who could keep her and support her like this, I would dissuade her, because it seems like a very risky strategy to me.’

‘You can’t then support yourself if the person you are with turns out to be a b*****! Luckily for Anna, I consider myself to be a very decent person.’

Gregg said he feels as though he is not around enough for baby Sid but it is important to him to ensure the family have financial security.

He said: ‘Well, I’m not there enough. I can disappear for up to two weeks at a time because of work and it’s not unusual for me to just have two nights a week at home.’

Gregg’s first marriage was a disaster and lasted only six weeks. He then met a chef called Denise who gave birth to Tom in 1994 and Libby in 1997.

The couple were married two years later but divorced after just five years when she discovered he’d been having an affair.Gregg won custody of the children.

He said: ‘Yeah. I don’t think it was great for my older kids,’ – he brought his kids up alone while he was trying to carve out a career as a greengrocer in the Nineties.

He comes from a working class family but made his first fortune before he was famous, supplying fancy fruit and veg to chefs during the restaurant boom.

‘When I was doing it as a single parent I just chucked housekeepers and nannies at them, with varying degrees of success. This is different. Sid’s got family around him.

‘He’s got Mum, Nonna [his grandmother] and Grandpa. I think we’re both missing out I have decided, again, to prioritise financial security. That’s what drives me.’

Gregg has been starring alongside John Torode on Masterchef since 2004 and while he considers him his close friend, they don’t really socialise outside of work.

He said: ‘We are really close, but it doesn’t fit in with other people’s ideas of what it should be. We don’t normally socialise outside of work.

‘We are beside each other every afternoon for six months of the year. We have a unique relationship on telly and I don’t want to do anything that might unbalance it.’

But they did go out together with Anna’s blessing to celebrate Sid’s birth.

He said: ‘F*** it. Yeah. We had a private dining room for six close friends. I consider John Torode to be a close friend. My kids Tom and Libby were there. We got steaming. Absolutely steaming. I had a two grand bar bill. Mate, the baby’s head? We drowned it. A proper big party.’

He said if Anna had minded, he wouldn’t have done it, adding: ‘Her Mum slept in the same room as Anna in hospital.

‘They were already looking after the baby together. The nurses said: “We love coming in this room, it is the calmest, happiest room”.’

Anna is his fourth wife but actually the second he has met on Twitter. The first was a head teacher called Heidi, 17 years younger than him, who sent a message saying he was her ‘weird crush’. They were married in 2011 but divorced 14 months later.

He acknowledged: ‘Listen, I made a terrible hash at things before. I made bad choices, but I’m not different with Anna than I was with any of the previous loves in my life. I just think it’s purely and utterly a game of chance.’

They first made contact when Anna asked him on Twitter about a duck recipe. He liked what he saw and got flirty but after a couple of dates she invited him to meet her family and things got very serious quickly.

‘She was very straight with me when we met. She said: ‘I want to get married and have children. ‘If you’re not interested in those things then don’t mess with me”.’

The couple tried to have a baby for two years and were about to have fertility treatment in the summer of 2018 when Anna became pregnant unexpectedly.

Gregg shared: ‘People assume Sid was conceived by IVF, but he wasn’t. She fell pregnant naturally while we were having a month in Italy. Whether it was the red wine or the quality of the food or the sunshine in Tuscany, I really don’t know.’

Anna suffers from endometriosis, a condition in which the lining of the womb grows in places it should not and which can make it hard to have a baby. ‘The doctors said: “He is a miracle. How you conceived naturally we have absolutely no idea”.’

Sadly Anna’s endometriosis got worse to the point where it was on her intestine and it’s been reported that she had a complete hysterectomy at 32-years-old.

He said: ‘That poor old kid. She had a four-and-a half-hour operation with two surgeons, then she was in intensive care for two days because she lost two litres of blood… She’s going to be better. A life without pain.’

And he added that they are both fine about not having more children together.

‘My wife is going to have another twenty to thirty years of life after I’ve gone. I want to provide for her.’

During the interview, Gregg spoke about how much of his life is extraordinarily regimented.

He said: ‘Everything is on a schedule. My PA puts half an hour in my diary for reading every day, unless it can’t be done. There’s the gym every day, a 20-minute walk, a 20-minute nap … until the weekends, when the walks go and it’s an hour’s proper reading and no nap.

‘Everything in my life is diarised: how much I read, how much game-playing on the computer, how much I watch television, how much time I spend with my baby son.

‘When I am at home I will put in on average, two hour-long segments with Sid [a day].’

His craving for order even extends to the way he dresses.

He said: ‘I have a rail for each type of clothes in my dressing room. I keep exactly the same number all the time, so there are always 10 suits, 12 jackets, 32 shirts and 20 sweaters. If I buy a new one, I have to throw one away.’

And talking once again about his beloved son, he said: ‘Can I tell you one of my favourite moments recently?

‘I’m not home very often and when I am, baby goes in with his grandparents to give me a night’s sleep, because I’m old and I’ve got to be in front of a camera the next day. But this time were staying in London and baby came in with us in bed.

‘Sid was talking to his Mum at about six in the morning. I made some noise – coughed or something – and he stopped and stiffened and I felt him moving.

‘Then he pushed the pillow down, looked over the top at me and just gave me this massive grin. This beautiful baby boy. It was just lovely. He just grinned at me.’