The ancient relatives of mammals began to evolve smaller, more flexible shoulders around 270 million years ago, new research has revealed.

These allowed them to have more complex backbones which opened the floodgates for mammal diversification, according to the new study.

With different regions of the spine evolving separately, mammals – including humans – were able to branch into a myriad of different forms that we see today. 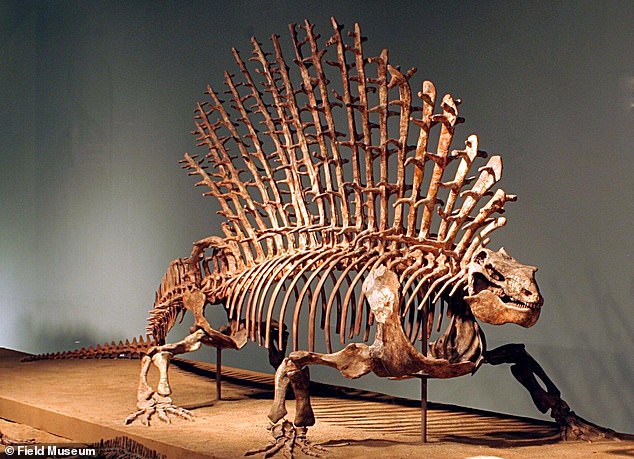 The ancient relatives of mammals began to evolve smaller, more flexible shoulders around 270 million years ago. Edaphosaurus, an early mammal relative that lived around 300 million years ago, which had a more primitive backbone with just three different regions

‘If you look at animals today, mammals stand out because that they have backbones where you can clearly see different regions; the vertebrae in each region look different from those in other regions,’ said Ken Angielczyk, a paleontologist from the Field Museum in Chicago and co-author of the new study, published in Science.

‘And now that we have a better understanding of how mammals’ backbones evolved, it looks like those changes were closely tied to changes that were happening in the shoulders.’

Mammal spines are made up of differently-shaped backbones, or vertebrae, in different sections of the spine.

For example the bones in the neck are flexible and thin whereas bones nearer our hips are thicker.

However, reptiles’ spines are much more uniform because the bones in the different sections are all similar.

For years, it was a mystery why mammals’ spines were so much more complex than reptiles’.

In the new study, researchers looked at clues in the backbones of mice, alligators, lizards, amphibians and fossil mammal relatives that lived between around 300 and 190 million years ago.

They found that around 270 million years ago ancient mammals developed more flexible shoulders. 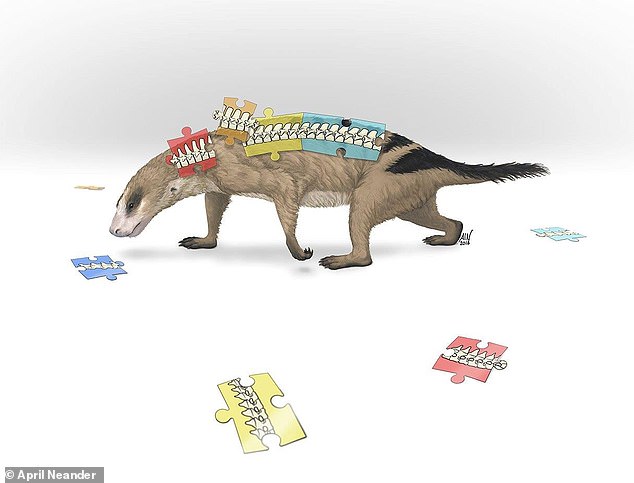 These allowed them to have more complex backbones which opened the floodgates for mammal diversification .This is an illustration showing an early mammal relative, Thrinaxodon, which was part of the first group to have an extra fourth section of their backbones 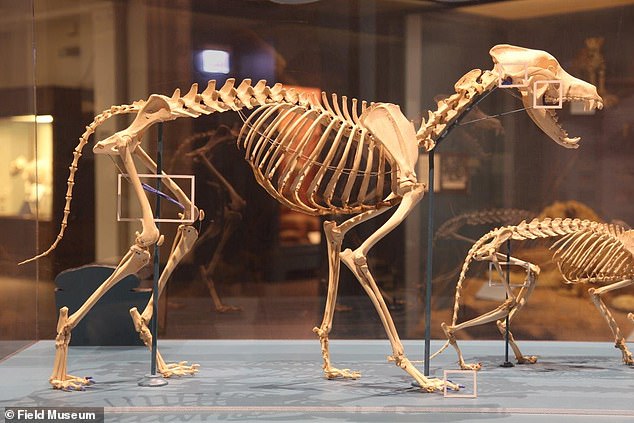 It had been a mystery why mammals’ spines were more complex than reptiles’. These are skeletons of a modern dog and cat — note the regions with different shapes of bones that make up the spine.

At about the same time, the animals’ upper backs underwent changes too, creating the mammal spines we see today.

Both the shoulders and the spine play an important role in locomotion and probably changed the way our ancient ancestors walked and ran.

‘We use our backbones in very distinctive ways that are closely tied to our different modes of life,” said Dr Angielczyk.

‘Cheetahs have flexible spines that let them conserve energy and take bigger strides, humans have unusual vertebral columns that let us walk upright, and whales have stiffer backbones with a few sections that are highly mobile so that they’re better swimmers.’

Compared to other four-limbed animals, mammals’ different ways of moving is unusual.

For example, lizards all crawl in a similar way and birds move their wings more or less the same way.

‘This is part of our history, why we’re bipedal. Without these changes 260 million years ago, the form that humans have wouldn’t have evolved,’ said Dr Angielczyk.

‘This study shows that changes to the blueprints important for building the mammalian back likely occurred many millions of years before the origin of mammals,’ said lead author Katrina Jones from Harvard University.

‘This demonstrates that evolutionary transitions can occur in surprising ways, which we would not expect from looking only at living animals.

‘Often, fossils are the only direct evidence we have of the origin of animal groups and can change our understanding of the history of life.’

Dr Angielczyk also notes that the study shows the importance of paleontology.

‘You wouldn’t have discovered this without fossils.

‘A lot of the specimens we looked at were collected in the 1890s to the 1950s, when the techniques we used didn’t exist.

‘Specimens collected for one reason are useful later on for a totally different reason. It’s a great plug for why natural history museums matter.’