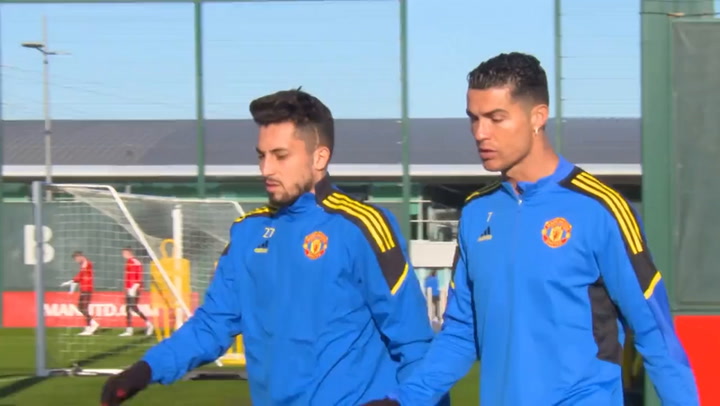 Cristiano Ronaldo trains with Man Utd ahead of Villareal test

Dimitar Berbatov was the toast of Old Trafford after scoring five times in a 7-1 demolition of Blackburn Rovers on this day 11 years ago.

The Bulgarian striker had been in the Premier League for four years by the time his red letter day arrived for Manchester United, so his talents were already well known.

Berbatov’s relaxed playing style and casual finishing made him a captivating watch on most days, but he took things to new levels on November 27, 2010.

He flicked in a close-range opener and, after Park Ji-sung added a second, he had plenty of help from Pascal Cimbonda’s awful back-pass for his second.

Berbatov’s third was undeniably the best, starting in the left-back position and involving Patrice Evra and Nani before a nonchalant finish into the roof of the net for 4-0.

With a hat-trick already in the bag, Berbatov added two more scrappy close-range finishes to get himself into the history books, as the fourth player to score five in a single Premier League game.

Eleven years on, he remains one of just five players to do so. Here are the stories of the other four.

The first person to achieve the feat was Cole, in a 9-0 thrashing of Ipswich back in 1995.

Cole was one of the Premier League’s most prolific strikers in the 1990s and finished his career with 187 goals in the division, putting him third on the all-time list, behind only Alan Shearer and Wayne Rooney.

He got five of those goals in a single game on March 4, 1995, as he stepped up in the absence of Eric Cantona, who was unavailable for nine months after kicking a Crystal Palace fan.

Cole got two in the first half as United went in 3-0 up and really let loose after the break, alongside strike partner Mark Hughes, who only got a paltry two.

There weren’t any particularly difficult goals in there, but Cole was a good example of being in the right place at the right time, gobbling up tap-ins, rebounds and loose balls inside the box.

Shearer remains the benchmark for any Premier League striker, so it’s unsurprising to see him in the record books for the most goals scored in a single game.

The Geordie striker has 260 Premier League goals to his name from spells with Southampton, Blackburn and Newcastle.

His most prolific game came for the latter against Sheffield Wednesday in what was Sir Bobby Robson’s first home game in charge of the Magpies.

After the struggles under Ruud Gullit, it was a dream start for Robson, who picked up a barely believable 8-0 win in a party atmosphere.

The characteristic Shearer one-arm celebration was out with regularity as he bagged an instinctive near-post finish, a penalty and a volley in the first half.

A rebound and another penalty were to follow in the second half as the Wednesday wheels fell off.

The record states that Wigan were just 1-0 down at half-time against Tottenham following a Peter Crouch header.

The visiting team likely went back out after the break with some confidence they could get back into the contest. It was not to be.

Defoe scored a hat-trick within seven minutes – the second fastest hat-trick in Premier League history at the time – before plundering two more to add to goals from Niko Kranjcar, David Bentley and Aaron Lennon.

Roberto Martinez’s side crumbled as Defoe darted in behind to fill his boots and go top of the Premier League scoring charts with 15 for the 2009/10 season on November 22.

The strangest game on the list for a few reasons. Firstly, Newcastle actually took the lead after 18 minutes through Aleksandar Mitrovic’s diving header.

And secondly, City only scored six goals – the lowest total of any of the sides to have had one player bag five in a single game.

Aguero, who was sporting a mohawk hairstyle for the occasion, got his first from his own diving header to make it 1-1 at half-time.

He opened the tap after the break, scuffing it from the edge of the box for 2-1, chipping Tim Krul to complete his hat-trick, bending in a low curler for his fourth and turning in a low cross for the fifth.

Considering all his goals came between the 42nd and 62nd minute, Aguero could perhaps have continued on to become the first player in Premier League history to bag a double hat-trick. But it wasn’t to be.

Not that he will be too disheartened. Aguero left City for Barcelona in the summer having scored 184 Premier League goals in 275 appearances – a stunning record.