Sign up to myFT Daily Digest to be the first to know about Investments news.

When I first appeared at public company annual general meetings 30 years ago, they were pretty lively affairs. I remember 800 braying Asda shareholders packed into Pudsey Civic Hall after the share price collapsed.

We had to open an anteroom with a video feed because we could not fit them all in. But today, most company AGMs are a shadow of their former selves. The days when loyal shareholders wanted to traipse the length of the country to attend a two-hour meeting for a cup of tea and a digestive biscuit are long gone.

With that, we have seen a big decline in popular shareholder democracy. In the 1980s the big UK privatisations, notably the “Tell Sid” campaign for British Gas, brought life to the idea of the people’s shares and people’s capitalism.

Much of that has now receded. Not only are most share registers dominated by institutions, but many of these are “trackers” or index funds which have to hold the shares anyway. Virtually none of their representatives attend AGMs and almost all, if they wish, get private access to management.

Marks and Spencer, the company I chair, is, in many ways, the last of the “people’s” companies. Not only are we a great British brand but we still have 147,000 individual shareholders, putting us in the top 10 per cent for shareholder numbers across the FTSE. Our AGMs are pretty vibrant by most standards, although this is partly because two-thirds of attendees are former employees and pensioners.

So we are keen to open up new ways for private shareholders to engage with us. In this day and age it is more important than ever that people can see company boards responding to the public and being held to account.

The pandemic has forced us to explore new ways of achieving engagement. We were the first to trial hybrid meeting technology in 2019, testing a digital platform with a group of shareholders to enable them to ask questions remotely alongside the physical event. As the crisis struck, this experience helped fast-track us to a successful fully digital AGM in 2020, the UK’s first, and gave us the impetus to push the format further in 2021.

We set up this year’s digital meeting to try to replicate the cut and thrust of the old AGM Town Hall event. The result was a 200 per cent increase in shareholder involvement. Just 562 shareholders made the trip to Wembley Stadium in 2019, but at this year’s digital AGM 1,650 voted, asked questions or viewed live and there were over 2,500 replays afterwards.

Just 562 shareholders made the trip to Wembley Stadium in 2019, but at this year’s digital AGM 1,650 voted, asked questions or viewed live and there were over 2,500 replays afterwards

We asked Kamal Ahmed, the business journalist, to act as the shareholder representative, putting the questions and demanding answers. In simple terms, digital has enabled us to democratise and give access to shareholders who were previously excluded by the practicalities of daily life.

Questioning our board no longer requires a shareholder to cross the country and stand up at a microphone in a stiff formal stage set; busy people can join at the click of a button from their office, sofa or kitchen table.

But, absurdly, and despite the experience of the past year, a huge online convention of shareholders does not constitute a valid annual meeting, though two people in a telephone box does.

The time has come for the government to recognise the need to rekindle shareholder democracy. Enabling digital AGMs is one aspect. Another is enabling direct communication. Over 9 per cent of our share register is in nominee accounts, many held for private individuals with whom we have no dialogue and who receive no communication from us. The number of direct shareholders we have is declining at 1 per cent per annum — meaning we can speak to 1,500 fewer shareholders every year.

Even if we could communicate with them, today’s governance system means company communications are ill-designed for private individuals.

The Companies Act was drafted for the pre-digital era and the default is paper-based. It has a minimum legal requirement to post a notice of availability to every shareholder at year-end, with details of the AGM and information on where to read the annual report online.

We still send out about 5,000 copies of our full annual report, which has in the past ten years doubled in length to 212 pages and reached half a kilo in weight. It is full of important stuff but not something the average shareholder will ever read, and it is very expensive to produce and send. 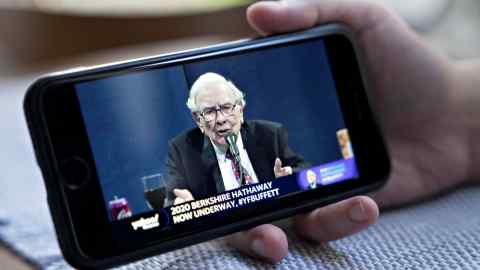 We should be able to publish it online and send shareholders a shorter, readable communication by email.

However, a lack of email addresses connected to shareholdings is one of the biggest blocks to meaningful engagement. The law should be amended to require shareholders to provide email addresses in the information given to registrars when investors buy equity.

This will not only make communications easier but also much faster. With printing and postage considered, any written communication takes a week to arrive and in an era of 24/7 news, this does not facilitate timely investment decisions. By contrast, we have 47,000 shareholders who have registered with us for e-communications, who receive regular “as it happens” updates and are more engaged as a result — and at least twice as likely to vote at our AGM or participate in corporate actions.

True digitalisation of our regulatory framework will democratise and not dilute shareholder voices. M&S is pushing the agenda but cannot be successful without changes to the Companies Act legislation, to ensure we can engage with every shareholder digitally throughout the year, not just over a prawn sandwich at our AGM.

Archie Norman is chair of Marks and Spencer

Selfridges owners in talks to sell to Thai conglomerate for £4bn

Boots slashed the price of morning-after pills on Black Friday. Why not every day? | Rose Stokes