A diet rich in flavanols — such as are found in apples, berries and tea — can help to lower your blood pressure and stave off heart disease, a study has claimed.

British and US researchers studied the diet and blood pressure of 25,168 people living in the English county of Norfolk.

They found that, on average, a person with a flavanol-rich diet had a blood pressure up to 4 mmHg (millimetres of mercury) lower than a person with low flavanol intake.

This is the same as the ‘meaningful’ change in blood pressure seen in those adhering to a Mediterranean or Dietary Approaches to Stop Hypertension (DASH) diet. 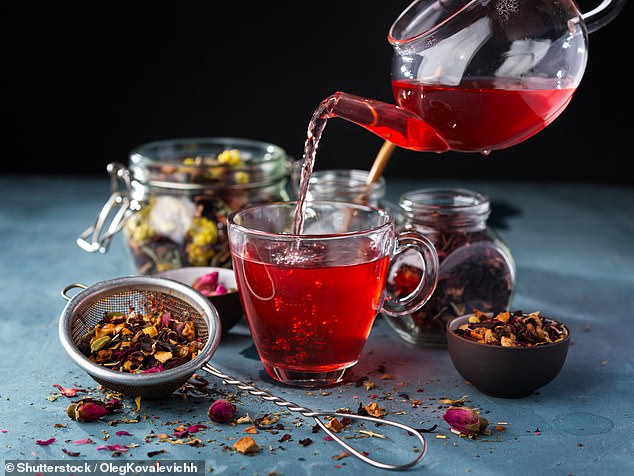 A diet rich in flavanols — such as are found in apples, berries and tea, pictured — can help to lower your blood pressure and stave off heart disease, a study has claimed

Unlike past studies which have typically relied on people reporting their own food and drink intake, the team used nutritional biomarkers — blood-based indicators of dietary intake, metabolism or nutritional status — to determine flavanol levels.

‘What this study gives us is an objective finding about the association between flavanols — found in tea and some fruits — and blood pressure,’ said paper author and nutritionist Gunter Kuhnle of the University of Reading.

‘This research confirms the results from previous dietary intervention studies and shows that the same results can be achieved with a habitual diet rich in flavanols.’

‘In the British diet, the main sources are tea, cocoa, apples and berries,’ he added.

‘This is one of the largest ever studies to use nutritional biomarkers to investigate bioactive compounds,’ Professor Kuhnle continued.

‘Using nutritional biomarkers to estimate intake of bioactive food compounds has long been seen as the gold standard for research, as it allows intake to be measured objectively,’ he added.

‘In contrast to self-reported dietary data, nutritional biomarkers can address the huge variability in food composition. We can therefore confidently attribute the associations we observed to flavanol intake.’ 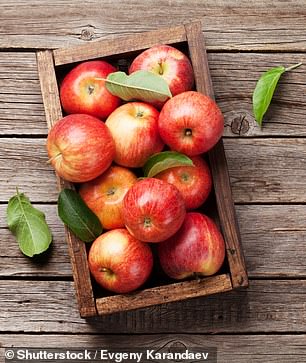 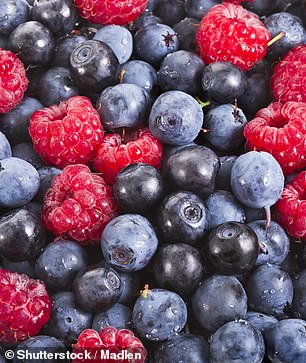 ‘In the British diet, the main sources are tea, cocoa, apples (left)and berries (right),’ said paper author and nutritionist Gunter Kuhnle of the University of Reading

‘This study adds key insights to a growing body of evidence supporting the benefits of dietary flavanols in health and nutrition,’ said Hagen Schroeter, the chief science officer at Mars Edge, which funded the study and participated in the research.

‘But perhaps even more exciting was the opportunity to apply objective biomarkers of flavanol intake at a large scale.’

‘This enabled the team to avoid the significant limitations that come with past approaches which rely on estimating intake based on self-reported food consumption data and the shortcomings of current food composition databases.’

The full findings of the study were published in the journal Scientific Reports.

WHAT DOES IT MEAN IF I HAVE HIGH BLOOD PRESSURE?

High blood pressure, or hypertension, rarely has noticeable symptoms. But if untreated, it increases your risk of serious problems such as heart attacks and strokes.

More than one in four adults in the UK have high blood pressure, although many won’t realise it.

Blood pressure is recorded with two numbers. The systolic pressure (higher number) is the force at which your heart pumps blood around your body.

The diastolic pressure (lower number) is the resistance to the blood flow in the blood vessels. They’re both measured in millimetres of mercury (mmHg).

As a general guide:

If your blood pressure is too high, it puts extra strain on your blood vessels, heart and other organs, such as the brain, kidneys and eyes.

Persistent high blood pressure can increase your risk of a number of serious and potentially life-threatening conditions, such as: