The ‘diabolical ironclad beetle’ can withstand enormous crushing force more than 39,000 times its own body weight, enough to survive being run over by a car.

Its exceptional strength comes from highly specialised armour which makes its exoskeleton one of the hardest materials in the biological world.

Scientists analysed the beetle’s elytron – a hardened set of forewings that protect the more delicate hindwings underneath – to learn more about the miraculous material.

They found layers of interlocking chitin, a hard material found in most insects, as well as high concentrations of protein contribute to its extraordinary strength.

The beetle species (phloeodes diabolicus) and its exoskeleton could inspire applications in construction and engineering fields such as aeronautics, experts say. 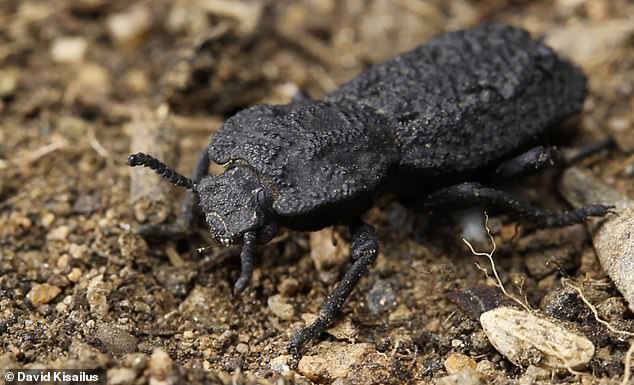 WHAT IS AN EXOSKELETON?

An exoskeleton is a hard covering that supports and protects the bodies of some types of animals.

The word exoskeleton means ‘outside skeleton’.

Many invertebrates, or animals without backbones, have exoskeletons.

Insects are the largest group of animals that have an exoskeleton.

The word ‘exoskeleton’ is used to describe a mechanical shell that covers the user and them provides robotic support.

‘In the biological tissues of numerous animal and plant species, efficient strategies have evolved to synthesise, construct and integrate composites that have exceptional mechanical properties,’ the team of US and Japan-based experts say.

‘One impressive example is found in the exoskeletal forewings (elytra) of the diabolical ironclad beetle.

‘Lacking the ability to fly away from predators, this desert insect has extremely impact-resistant and crush-resistant elytra, produced by complex and graded interfaces.’

The diabolical ironclad beetle is an oak-dwelling species, primarily found on the western coast of North America, including southern California.

It can be found under the bark of hardwood and coniferous trees, playing dead and resembling a small rock because of the rough texture of its elytra.

‘Beyond feigning death, this beetle has a remarkable ability to withstand crushing and piercing strikes from predators, and even the occasional automobile,’ the authors say.

Its strength means people can step on it firmly and it can simply crawl away. 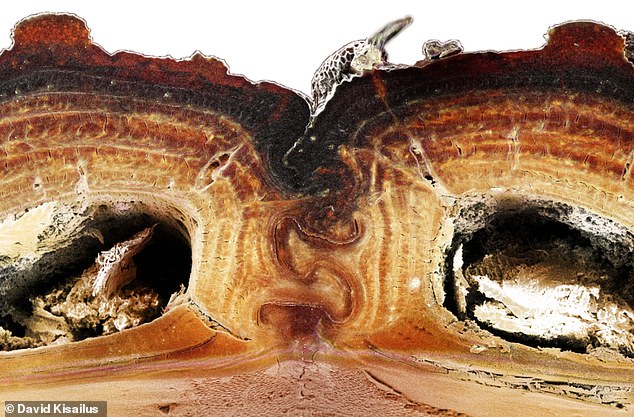 Optical micrograph of the structural features and material composition of the elytra (pictured) allow the beetle to withstand forces of up to 149 newtons (approximately 39,000 times its body weight). It features a complex series of interlocked jigsaw-shaped joints

Optical micrographs of cross-sections of the elytra from a diabolical ironclad beetle speciment (first and second from left), comparing with three more beetle species – from left, C. muricata, A. verrucosus and E. grandicollis

Using advanced microscopy, spectroscopy and mechanical testing, the authors observed a series of interlocked jigsaw-shaped joints at the middle of the elytra.

They found that the geometry of these blades and their laminated microstructure provide ‘excellent mechanical interlocking’ and toughening of the exoskeleton.

They team also performed compression tests on its entire exoskeleton and compared durability with other beetles native to the southern California region – asbolus verrucosus, eleodes grandicollis and cryptoglossa muricata.

The diabolical ironclad beetle could withstand greater peak loads, due to more complex interlocking structure of its elytra. 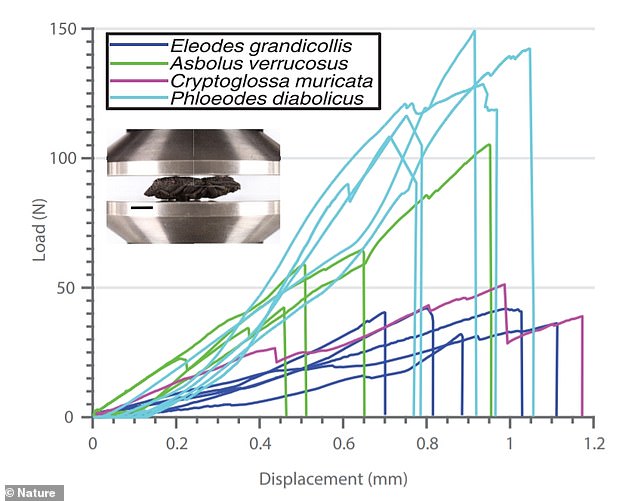 The team decided to test the potential of this geometric structure as a mechanical fastener for joining different materials such as plastics and metal, similar to that required in turbines in the aerospace industry.

They constructed a series of joints made of metal and composites that mimic the structures observed in the beetle.

The team’s observations could be applied in developing tough, impact- and crush-resistant materials for joining dissimilar materials.

The beetle’s robustness has also presented challenges for entomologists trying to mount the beetles in display cases, the researchers added.

Its elytra is capable of bending or snapping steel pins that would otherwise easily puncture other beetle species on display.

The study has been published in Nature. 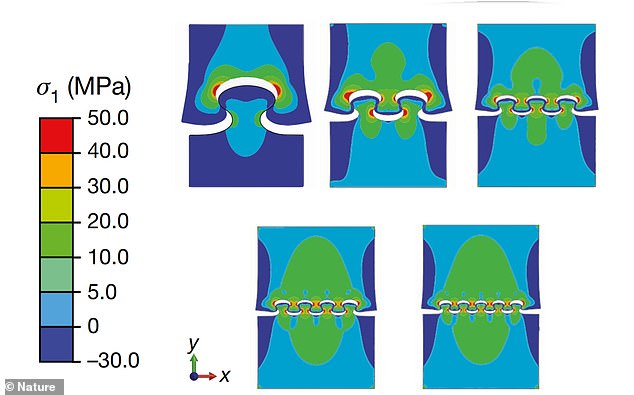 Researchers constructed a series of joints made of metal and composites that mimic the structures observed in the beetle. Images show samples tested in tension and stress distribution

Image (a) shows a diabolical ironclad beetle and image (b) shows the beetle and steel pins bent by its elytra. Scale bar is 5 mm