A HEARTBROKEN dad found out his two daughters had died in a horrific crash when he saw a news report about the smash on TV.

Rolando Busto, from Argentina, says when he saw the report he started praying that his kids – aged 12 and 16 – weren’t in the car that plunged off a 130-foot cliff.

But just minutes later, the devastated dad got a call saying his daughters had died in the crash.

Alma Mia Molina, 12, and her sister Agustina Mia Molina, 16, were travelling in a car with 32-year-old Matias Bustos Reynoso, 32, and his older sister Antonela, 29, when he lost control of the car and drove into a 130ft-foot deep gorge in Cordoba on Tuesday.

According to local media Rolando – the father of the two girls – is also the father of Reynoso, who was reported to be Antonela and Agustina’s brother and Alma’s uncle.

Local news site TN reports the group were on their way back from a local hospital where Antonela – who is three months pregnant – had undergone an ultra-sound check.

But Reynoso lost control of the Fiat Stylo on route E-54 and the car veered off the road, smashed through the guard rail and then tumbled down the cliff.

The two girls, who were sat in the back of the car and were both wearing seat belts, reportedly died at the scene.

Reynoso and Antonela are in a stable condition but are still being treated in hospital.

Rolando told the local news site El Doce: “I saw the report on the news and I started praying that it wasn’t my daughters.”

The grieving dad added: “Just minutes after seeing the footage I got a call confirming my worst fears – my daughters had both died in the crash.”

Rolando said that his son Reynoso lost control of the car because the road was slippery and there was a thick fog on the road.

“My son lost control of the car and it crashed into a deep ravine,” he added.

Reynoso is being investigated by authorities, who are yet to confirm the reason. 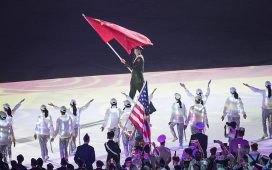 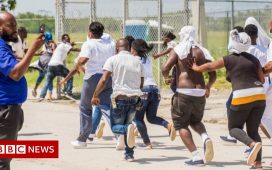 SeaWorld killer whale Skyla died of ‘trauma’ after being ‘ripped’ from her mum and shipped 4,000 miles away