Early-onset Alzheimer’s – a form of dementia – can show up in small ways once a person nears middle age. It might begin as forgetfulness that can easily be overlooked. Dementia charity Alzheimer’s Research UK elaborated on memory issues. “This may include forgetting messages or recent events that would normally be remembered, or repeating questions,” the charity noted.

These symptoms might be indicative of depression, which is why knowing the other warning signs of the brain condition is useful.

For example, the brain condition can cause a person to find it difficult to find the right words to communicate; this is known as aphasia.

The experts at the NHS expanded on what aphasia is and how it can show up in people.

“Aphasia is when a person has difficulty with their language or speech,” the experts said.

“People with aphasia often have trouble with the four main ways people understand and use language. These are:

Aphasia may show up as the person “using the wrong sounds in a word”.

Or the person could choose the wrong word, or put words together incorrectly.

While aphasia can affect a person’s ability to communicate, it doesn’t affect their intelligence.

As soon as anyone suspects dementia, the charity recommends visiting your doctor.

Once in the doctor’s clinic, you can discuss your concerns and memory tests can be carried out.

Some people may be referred to a memory clinic for further specialist tests.

Gaining an early diagnosis means a person can get their affairs into order while they are still able to do so.

B12 deficiency: The sign in the ‘corner of the mouth’ warning levels are dangerously low 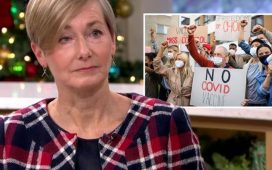 'We have personal responsibility to others!': Doctor utterly frustrated at anti-vaxxers

High cholesterol symptoms: The warning sign in your eye – it may lead to blindness 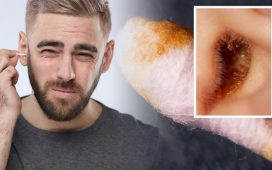 How to clean ears: The three reasons why you shouldn't use a cotton bud