Navalny, who blames Putin for the poisoning in August, has vowed to return home to continue his anti-corruption campaign, Radio Free Europe reported.

“I will not give Putin the gift of not returning to Russia,” he said in a Der Spiegel interview published on October 1, adding that for him, “Putin is behind this act. I don’t see any other explanation.”

In his first interview since falling ill after ingesting what experts say was a Soviet-style nerve agent from the Novichok group while he was in Siberia, the courageous 44-year-old Kremlin critic said that his health continues to improve since being released from a Berlin hospital on September 22.

Navalny spent 32 days in the clinic, including 24 days in an intensive care unit.

Intelligence experts speculate that Putin’s Unit 29155 assassination squad, was likely to blame for the Novichok attack.

Meanwhile, the Kremlin reacted with its patented spin on anything or anyone who opposes the ruthless Russian president.

In response, Navalny coolly challenged Peskov to present evidence to back up his accusation and said he would sue him over the accusation. His aide, Lyubov Sobol, called the allegation “complete gibberish.”

Navalny collapsed aboard a flight from Siberia to Moscow on August 20 and spent nearly three weeks in an induced coma, the report said.

After 48 hours in a hospital in Omsk, where Russian doctors predictably claimed they found no trace of any poisoning, Navalny was transferred to the Charite hospital in the German capital.

Doctors there immediately found traces of a Novichok-like nerve agent in his body. Their findings were independently confirmed by labs in France and Sweden, sparking international condemnation, the report said.

The Kremlin — as it routinely does — firmly denied allegations of involvement and accused Western leaders of launching a disinformation campaign over Navalny’s illness.

Peskov, of course, didn’t provide “such information,” or anything to back up his claim — in other words, it’s just a lot of Kremlin hot air.

In response, Navalny wrote on his website: “Firstly, I am suing Peskov.”

“And secondly, I demand the publication of proof and facts, demonstrating my ‘work with CIA specialists’. Show it on television at prime time. You have my permission.”

Just hours after the publication of Navalny’s interview, the chairman of the Russian parliament’s lower chamber, the State Duma, Vyacheslav Volodin also accused Navalny of working on behalf of Western countries and claimed, in bizarre fashion, that Putin, Russian doctors, and the pilots who acted quickly were the ones who saved his life.

Only “a shameless person” could say otherwise, Volodin claimed, the Interfax news agency reported on October 1.

Amid allegations from Navalny’s allies that Kremlin agents had poisoned him, the Russian government has resisted growing international pressure to launch a criminal investigation.

Der Speigel noted that when Navalny tries to perform a simple task such as pouring a glass of water, “it clearly takes a lot of effort,” and that he needed to use both hands.

It said Navalny seemed more nervous than at previous meetings with the publication’s writers, with his face narrower and his body more wiry.

Navalny shrugged off his physical state, saying it was “important” that the interview appears in the German press because the country “saved my life.”

“I feel immensely grateful to all Germans. I know that sounds a bit pathetic now, but Germany has become a special country for me. I barely had a connection here I was only in Berlin for the first time three years ago! And then so much human concern, from so many people,” he said. 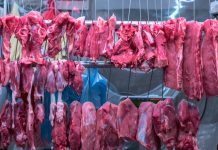 Riyadh boycott products 'made in Turkey'