Deep-sea anglerfish take sexual intimacy to the next level by ‘fusing’ bodies with their partners when they mate, a study reveals.

In an amazing show of sexual submission, the smaller male anglerfish becomes permanently attached to the relatively gigantic female, resulting in their tissue fusing and the two animals establishing a common blood circulation system.

The male becomes entirely dependent on the female for nutrient supply, like a developing fetus in the womb of a mother – a process called ‘sexual parasitism’.

In an incredible display of charity from the female, the male supplies sperm to his mate while simultaneously receiving these nutrients.

This weird phenomenon contributes to the reproductive success of anglerfish in the vast deep sea, where females and males otherwise rarely meet.

In order to support the mating-fusion process, female anglerfish have evolved a new type of immune system that does not regard the male as ‘foreign tissue’, allowing them to host up to eight mates simultaneously. 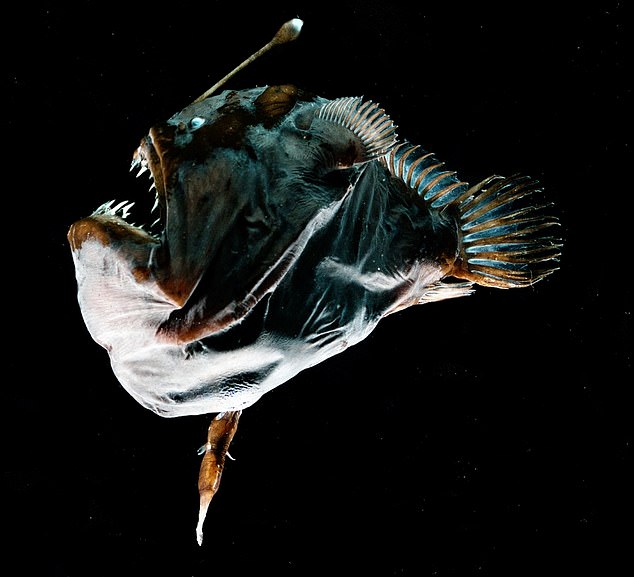 Eat your heart out John and Yoko: A female specimen of the deep-sea anglerfish species Melanocetus johnsonii of about 3 inches (75mm) in size with a one inch (23.5mm) male fused on her belly

The permanent attachment of males to females represents what the scientists call a form of ‘anatomical joining’, unknown in humans except for rare genetically identical twins.

In other vertebrate species, sexual parasitism would automatically trigger an immune response and attack foreign tissue, just as it would to destroy cells infected by pathogens.

This explains why organ transplantation in humans is such a delicate process – it requires careful cross-matching of donor and recipient tissue characters, together with immunosuppressive drugs, to ensure the long-term survival of an organ graft.

But for anglerfish, protective immunity would actually stand in the way of reproductive success in the abyss of the deep sea.

Don’t try this at home: Female of the species Photocorynus spiniceps, 1.8 inches (46mm) with a 0.2 inch (6.2mm) parasitic male fused to her back

‘These findings hinted at the possibility that the immune system of anglerfishes was very unusual among the tens of thousands of vertebrate species,’ said study author Jeremy Swann at the Max Planck Institute of Immunobiology and Epigenetics (MPI-IE) in Freiburg, Germany.

Researchers therefore investigated how anglerfish overcome tissue-rejection and perform such a intense union.

‘We assume that as yet unknown evolutionary forces first drive changes in the immune system, which are then exploited for the evolution of sexual parasitism,’ said co-author Thomas Boehm, also at MPI-IE.

The phenomenon of sexual parasitism has posed an enigma that has existed for 100 years, ever since the first attached couple was discovered by an Icelandic fisheries biologist in 1920. 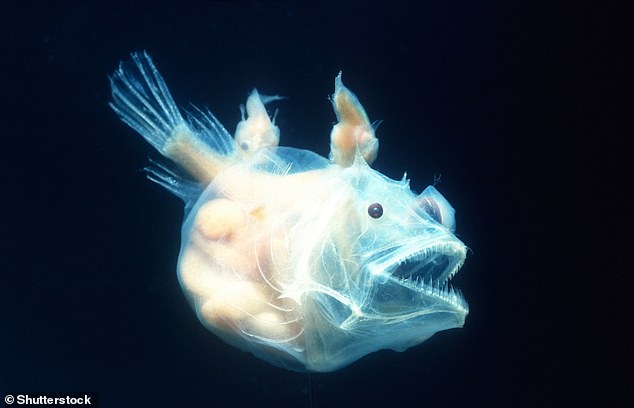 With scientists from the US, the MPI-IE team studied the genomes of different anglerfish species, including the structure of molecules called major histocompatibility (MHC) antigens.

These molecules are found at the surface of the body’s cells and signal an alarm to the immune system, when the cells are infected by a virus or bacteria.

MHC molecules are extremely varied and it is hard to find identical or near-identical forms in any two individuals of a single species.

This helps explain the problem of tissue-matching that makes human organ and bone marrow transplantation rife with complications.

Anglerfish that permanently attach are largely lacking the genes that encode these MHC molecules, the team discovered.

The scientists say that it’s as if the permanently attached males ‘had done away with immune recognition’ in favour of tissue fusion.

This inhibited the function of T cells, a type of white blood cell of key importance to the immune system. 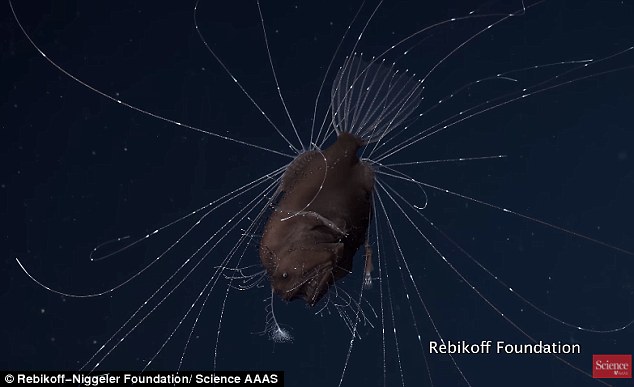 In a shot from footage of live anglerfish mating, a fist-sized female completely dwarfs the male fused to her underside (seen as the tiny object just beneath her belly)

‘Apart from this unusual constellation of MHC genes, we discovered that the function of killer T cells, which normally actively eliminate infected cells or attack foreign tissues during the organ rejection process, was also severely blunted if not lost entirely,’ said Swann.

Further research indicated that antibodies, the second powerful weapon in the arsenal of immune defence, are also missing in some of the anglerfish species.

For humans, the combined loss of important immune facilities would result in a severely compromised ability to fight infectious diseases – showing some fetishes that are best left to specialised underwater organisms.

To effectively be able to stay alive, anglerfish have better innate facilities to defend themselves against infections, the team say.

The study shows that vertebrates can survive without the adaptive immune facilities previously considered to be irreplaceable.

‘We assume that as yet unknown evolutionary forces first drive changes in the immune system, which are then exploited for the evolution of sexual parasitism,’ said Boehm.

The findings have been published in the journal Science.

In 2018, scientists revealed footage of live anglerfish mating for the first time, according to a report in Science Magazine.

Before then, anglerfish mating pairs had reportedly only been observed in dead specimens caught in nets.

The eerie footage shows the female’s glowing filaments extending all around her body, as the tiny male clings on.

The footage was captured at a depth of 2,600 feet off Portugal’s São Jorge Island by husband and wife deep sea explorers Kirsten and Joachim Jakobsen using a remotely operated vehicle.

WHAT IS SEXUAL PARASITISM? 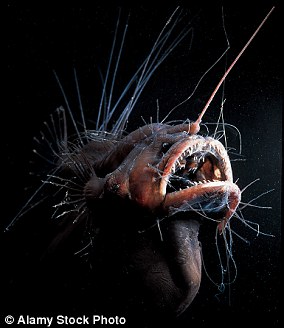 Many species of deep-sea anglerfish are known to engage in a type of reproduction known as sexual parasitism.

While they aren’t the only creatures to mate in this way, the behaviour has largely come to be associated with these fish, among which more than 20 species are known to do it, according to Brittanica.

Female anglerfish are much larger than the males.

When it’s time to mate, a male will bite onto the massive female and in some cases even fuse to her body, joining their tissues and circulatory systems.

The male becomes dependent on the female for nutrients – and, he turns into her permanent sperm supply.

One of England's earliest Victorian baths are discovered in Bath