Manchester United star David de Gea says Bruno Fernandes has the full support of his team-mates and will bounce back from his shocking penalty miss in the side’s 1-0 defeat to Aston Villa.

Fernandes had a golden opportunity to score a stoppage-time equaliser Trafford as Kortney Hause handled inside the box just moments after heading Villa in front.

But the Portugal international, renowned for his quality from the spot, ballooned his effort over the crossbar and the visitors kept hold of their advantage to secure victory.

It was a second home defeat in as many games for the Red Devils – following their Carabao Cup loss to West Ham in the week – and Ole Gunnar Solskjaer’s players will be desperate to return to winning ways when they play host to Villarreal in the Champions League on Wednesday night.

‘It’s a very disappointing day for us. I think there are no excuses today,’ United goalkeeper De Gea told MUTV shortly after the final whistle.

‘We were playing at home, we were with confidence.

‘So if we want to win big trophies like the Premier League, we have to win these types of games.’

De Gea felt Villa controlled the tempo for long periods and made lift difficult for United with their high press.

‘They are a very good team and they know what they do,’ the Spaniard added.

‘They press high so they make the tempo be a bit slow so I think they did well and did the right things.

‘We created enough chances to score as well so maybe in another game we’ll score.

On Fernandes’ missed spot-kick, De Gea continued: ‘He’s very confident. He took the ball so we believe a lot in him.

‘It’s just a penalty, a bad kick. That happens and it’s a normal thing. This is football.

‘For sure, he’s going to be the same with confidence. He’s a top player so it’s totally fine.’

United return to Old Trafford to entertain Villarreal in four days time and De Gea believes it will be a ‘massive game’ after back-to-back defeats at the stadium.

‘It’s time to recover, time to see what we can improve from the game,’ he went on.

‘So it’s another massive game on Wednesday. We play at home with the fans, it’s going to be a nice one so let’s prepare properly and be ready.’ 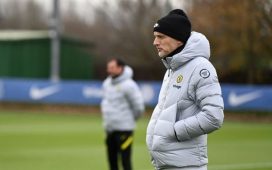