DANIELLE Lloyd looked amazing as she showed off her post-baby body in a white crop top.

The mum gave birth to her fifth child just a few weeks ago – a baby girl named Autumn Rose.

Danielle, 37, wore the eye-catching outfit where she paired the torso-bearing top with a pair of tight trousers, a matching cardigan and trainers.

Announcing her return to work, Danielle wrote on her Instagram stories: “Excited to be back working and doing some social media posts today with baby Autumn in tow.”

Her words were followed by an emoji saying ‘Mum Business Life’.

The model gave birth to Autumn on November 12 and the little one is her second child with husband Michael O’Neill.

But now the mum-of-five has suggested she’s not finished having babies just yet.

She said: “The midwives asked me [if I was going to have any more] when she came out and me and Michael were like, ‘no!’

Confessing her husband Michael O’Neill definitely isn’t there yet, Danielle added to new! magazine: “I’ll have to persuade Michael first.”

Danielle also shares son Ronnie, three, with Michael, plus she’s mum to Archie, 11, Harry, 10, and George, eight, from her marriage to Jamie O’Hara

This week she was back posing topless and selling lingerie shots for fans on the site for £13.50-a-month.

Just eight days after delivering the mite, she told fans: “Am back. Am now fully back and I’ll be doing lives and posting all new content over the coming days and so watch this space.”

Another message read: “Am back who wants a special picture in their inbox?”

And a topless shot taken in her walk-in wardrobe at the weekend was accompanied by the message: “Who’s missed me?” 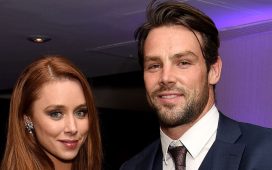 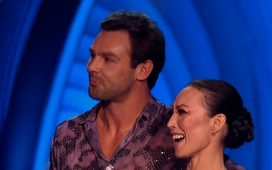 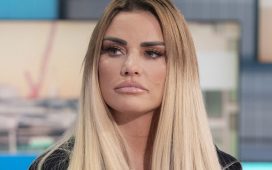 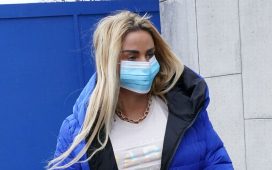