If a cartoonist’s job is to raise a smile in the bleakest of times and to provoke a laugh in adversity, then 2020 has certainly provided rich material.

Two young cartoonists have captured the spirit of this annus horribilis by doing just that, sharing the title of Young Cartoonist of the Year.

Winning the under-18s category with astonishing precociousness, 11-year-old Daniel Meikle produced an image to bring a smile to viewers battered by a year of bad news. In it, a small giraffe looks up at a much taller giraffe, its head far out of view. “Nice hat,” it says.

Martin Rowson, the judge and chair of the British Cartoonists Association, called it a “simple sight gag” which was, in his opinion, “New Yorker good”.

Meikle has already been cartooning for years, and began honing his craft as a 10-year-old when he accepted a challenge from a family friend to draw a cartoon every day, rising early to draw before school. “I like the enjoyment my cartoons give to people,” he said. “It makes me happy, and it’s a bit like writing – you can really tell a story.”

The under-30s competition was won by 29-year-old Fergus Boylan from Antrim, who goes by the handle @infiniteguff, for his depiction of Boris Johnson’s infamous adviser Dominic Cummings stuck deep in a hole, and looking upwards with trepidation. At ground level, Johnson, Gove and Hancock dig with gusto, splattering four essential workers stood behind them.

The judges called it “another excellent piece of visual slapstick”, with Rowson adding: “The works – and the visual representation of Dominic Cummings’ defining malevolent nerdiness, is so accurate it could be a photo.”

Reflecting on an extraordinary year for cartooning, Rowson added: “In this foulest of years, about the only group of people to have prospered are Jeff Bezos, takeaways and cartoonists – in each case because nothing has changed. With us cartoonists, we’re still stuck indoors on our own staring out of the window, until magically we succeed in teasing a laugh out of the worst things imaginable.”

The competition, now in its 25th year, is often a strong indicator of future success and has produced winners including Nick Edwards, who went on to win an Emmy for his work on Uncle Grandpa in the US, the New Yorker cartoonist Will McPhail, and political cartoonist Matt Buck. “As I’ve been saying for years, really this is just a way of identifying the really good ones so we can break their talented tiny fingers to protect our jobs,” said Rowson.

Judged by an illustrious rabble from each national newspaper, including the Guardian’s Rowson and Steve Bell, as well as the Financial’s Times’s Banx, the Telegraph’s Matt and the Comics Laureate Hannah Berry, the competition was originally set up as the Mel Calman Young Cartoonist Competition, in memory of the Times cartoonist and Cartoon Art Trust founder. It eventually morphed into its current form and was funded this year by the National Lottery Heritage Fund as part of a £98,700 grant awarded to The Cartoon Museum, which was forced to close earlier this year due to the Covid-19 pandemic.

“We are incredibly grateful that the National Lottery Heritage Fund has supported us through such a difficult year,” said Joe Sullivan, director of The Cartoon Museum. “We want to thank them and all national lottery players for their support of this year’s awards, helping to nurture and develop the skills of the cartoonists of tomorrow.”

Illuminated River: lighting up London’s bridges with skill and charm

Rachel Whiteread: ‘I have a clarity I never had before’ 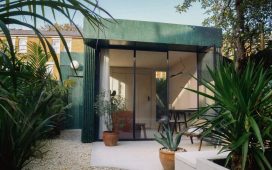