Dad-of-two Wesley Hamnett set a cycling challenge to go 200 miles from Glasgow to Manchester – but to make it even tougher, he did it all on his daughters’ tiny pink bike.

He had wanted to raise funds for various charities and hospitals which were close to his heart after he lost his granddad to cancer last year.

He’d originally planned to cycle 1,250 miles from Russia to his home near Manchester, Lancs, but had to cancel due to the pandemic.

Instead, he decided to cycle from Glasgow to Manchester while riding a comically small bike his two young daughters had used.

After a gruelling cycle which included a six-hour long stretch and eight busted tyres, he managed to drag the 12-inch wheels to home on Monday night (Sep 21).

‘But I was going to find out one way or another – even if it was absolutely mental.

‘I barely made it – I felt like I was in Formula 1, I had to change my tyres eight times.

‘I felt like I was going to die during certain stretches, but it was all worth it.

‘We’ve gotten so much incredible support on this journey and none of it would have been possible without the bike.

So far, he has raised £4,000 and he hopes to be able to do his trek from Russia to Manchester to raise more for the causes close to his heart.

He said: ‘My last grandad died of cancer last year after he got it for the second time.

‘It’s something that really affected me and I knew I wanted to do something as a tribute.

‘I wanted to raise funds for all the charities that have done incredible work and helped my family and friends throughout the years.

‘It evolved from that into something a little bit crazy.’

Cycling from Russia has been something he’s been thinking about for years and he’d started planning it in October 2019.

He bought flight tickets to Russia for the summer but sadly had to cancel.

The cargo handler said: ‘I’ve always been obsessed with the idea of cycling from Russia to Manchester.

‘So I thought I’d encourage people to donate and I’d cycle as far as they’d donate – and if they hit the target I’d do the seriously stupid challenge.

‘After Covid hit I was forced to cancel it but decided to come up with a new plan and cycle down from Glasgow on a bike.’

He arrived in Glasgow by train on Wednesday morning and set off on his pink 2013 Raleigh Molly bicycle at around 11am.

He reached peaks as high as 1,350 feet at the Shap Summit in Cumbria, which was a struggle on his tiny bike.

Wesley said: ‘I was cycling up this massive hill and I just thought this bike wasn’t built for this.

‘But I kept pushing because any time there’s an uphill climb, there must be a downhill climb.

‘I couldn’t stop if I tried – it was scary, but amazingly fun.’

The dad was filled with intense emotion after he reached the finishing line, welcomed by his two daughters Evie Hamnett, 10, and Tehya Baron, eight.

He said: ‘The bike had a special significance to me as it’s the one my two daughters learned how to cycle on.

‘It’s something you never forget, as I still remember my first bike – it was red with white tyres.

‘I remember feeling free, feeling like I could do anything in the world.

‘The bike was significant to me, to my children, and hopefully it will be to anyone who has joined us on this journey.

‘I want to thank everyone who has donated – they’ve been absolutely amazing.

‘I feel so overwhelmed but it’s been a real blessing.

You can donate here.

How to learn tarot for beginners 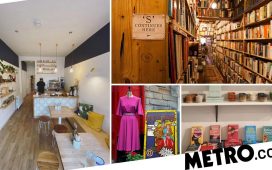 The Local List: The best independent stores in Edinburgh to shop online 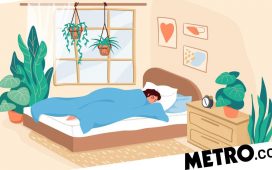