Cristiano Ronaldo has rolled back the years at Euro 2020, breaking records and helping Portugal to the knockout stages, but his exploits haven’t been to everyone’s tastes.

The 36-year-old set the reigning champions on their way to qualification for the knockout stage by scoring twice during Portugal’s first Group F match against Hungary in Budapest.

In a match that look destined to end in a goalless draw, Portugal struck three times in the final six minutes, with Ronaldo bagging a brace that helped him usurp Michel Platini as the most prolific goalscorer in European Championship finals history.

The Juventus forward’s first goal came from the penalty spot and was followed by a trademark celebration in front of the home crowd, much to the displeasure of Hungary head coach Marco Rossi.

‘Ronaldo is a great champion but at times he can be annoying,’ he told Gazzetta dello Sport.

‘After the penalty with us he celebrated as if he had scored in the final. People notice these things.’

Ronaldo has since gone on to score three further goals during the tournament and drawn level with legendary Iranian Ali Daei on 109 international goals in total.

Should he find the back of the net against Belgium on Sunday, Ronaldo will set yet another record and move ahead of Daei who has already offered his congratulations.

‘I am delighted that Ronaldo will be the one who is doing it, because my record being touched by a player like Ronaldo feels like another record to me.

‘I admire his commitment and focus. And after reaching so many titles, his passion for the game is like on day one.’ 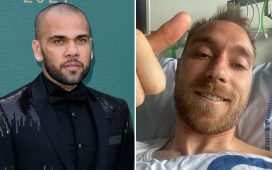