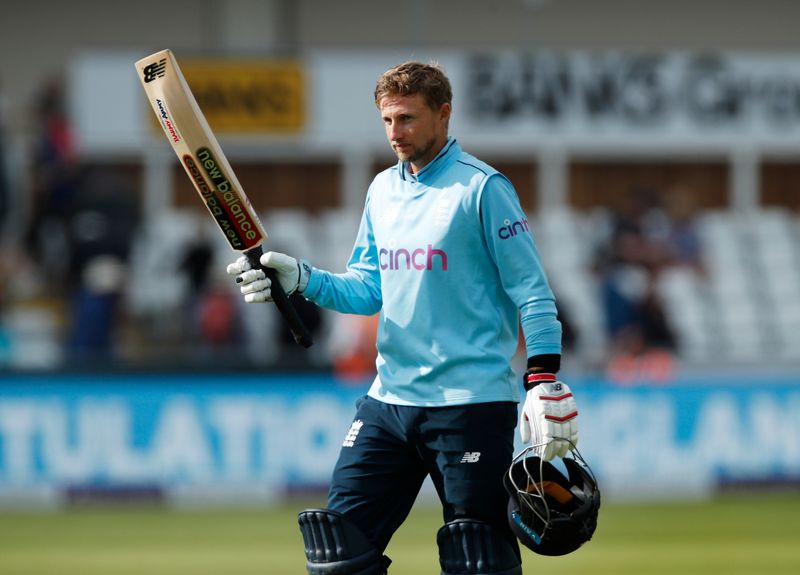 (Reuters) – Joe Root celebrated his 150th one-day international appearance with an unbeaten half-century as England claimed a five-wicket win over Sri Lanka in their series opener at Chester-le-Street on Tuesday.

Chasing a target of 186, England opener Jonny Bairstow made a fast start as England reached 50 inside five overs but soon lost his opening partner Liam Livingstone, who clipped a Chamika Karunaratne delivery straight to mid-on.

Bairstow fell seven runs short of a half-century after he was bowled by Binura Fernando, and the hosts were soon reduced to 80-4 as Dushmantha Chameera removed skipper Eoin Morgan (6) and Sam Billings (3) cheaply.

Root and all-rounder Moeen Ali (28) stitched together a patient 91-run partnership to steady the ship.

Chameera returned to dismiss Ali but Root finished with an unbeaten 79, and along with Sam Curran, ensured there were no further hiccups as England clinched victory in the 35th over.

Chris Woakes led the English bowling attack with a four-wicket haul as a depleted Sri Lanka side were bowled out for 185 with 7.3 overs to spare.

Woakes, playing his first ODI in nine months, finished with an impressive 4-18 from his 10 overs as the tourists lost their final seven wickets for 40 runs.

“I’m delighted. The way the guys started and persisted the whole time we were in the field left us in a really good position,” Morgan said. “Full credit to our bowling unit today, it really did fire.”

Sri Lanka’s batsmen struggled to post big scores during the previous 3-0 Twenty20 series loss to England and it came as no surprise when they crumbled again in the middle overs.

The tourists arrived into the match without three senior players — Kusal Mendis, Niroshan Dickwella and Danushka Gunathilaka — who were all sent home following a breach of bio-bubble protocols.

Captain Kusal Perera scored a gritty 73 and shared a 99-run fourth-wicket stand with Wanindu Hasaranga to keep England at bay.

It was Woakes who ended the partnership and started the collapse with Hasaranga (54) holing out to Livingstone at deep mid-wicket off a short ball.

Left-arm paceman David Willey removed Perera on his way to 3-44, with the innings ending when Sam Billings ran out Praveen Jayawickrama with a direct hit.

“Hasaranga did a good job for the team, we got a partnership but not enough,” Perera said. “But two more games to go. It’s a team game, we have to get together to get a good score.”

The second game of the three-match series will be played at The Oval on Thursday.

Is action man Gove up for a daring investment adventure?