The investment banks Nomura and Credit Suisse have warned they are facing “significant” losses after a US hedge fund reportedly defaulted on margin calls, forcing a “fire sale” of an estimated $20bn (£14.5bn) worth of stocks that threatens to ripple across global markets on Monday.

Credit Suisse shares plunged 14% in early trading on Monday, while in Japan Nomura shares closed down more than 16%.

The global banking groups issued stock market updates on Monday, saying they were evaluating the potential hit to their financial results.

Credit Suisse, Switzerland’s largest bank, did not name the firm but said a “significant US-based hedge fund” had defaulted on margin calls made last week by a group of lenders.

Nomura said the loss, which affected its US subsidiary, could be worth about $2bn, based on current market prices, because of transactions with an unnamed US client.

Other European banking stocks also fell in early trading on Monday, with Deutsche Bank falling 5% and UBS down 3.8%, as nervous investors waited to see if the fallout from Friday’s dramatic sell-off in New York would spread further.

Archegos Capital, a New-York-based firm that manages the private wealth of the hedge fund manager Bill Hwang, was widely reported to be the client linked to the Credit Suisse and Nomura trading losses.

A dramatic drop in ViacomCBS’s share price last week prompted Archegos brokers including Nomura and Credit Suisse to make margin calls against their client that resulted on Friday in a massive sell-off of shares in New York, CNBC reported, citing a stock market insider involved in the trading.

Archegos was reportedly forced to unwind trading positions that resulted in about $20bn worth of stock being sold in the US media companies ViacomCBS and Discovery, and Chinese tech companies listed in New York. ViacomCBS shares closed down 26% and Discovery slumped 27%.

Banks such as Nomura and Credit Suisse offer broker services to clients such as Archegos, lending them money to buy shares and other assets, while also processing their trades.

However, if the value of assets held in the client’s account falls significantly, usually because of a slump in the price of shares or other publicly traded securities, the broker can make a margin call, demanding that their client adds more cash or collateral to their accounts.

If clients fail to meet that demand, the broker will take steps to minimise their potential exposure to losses – including selling shares and other assets owned by the client.

“Following the failure of the fund to meet these margin commitments, Credit Suisse and a number of other banks are in the process of exiting these positions,” Credit Suisse said. “While at this time it is premature to quantify the exact size of the loss resulting from this exit, it could be highly significant and material to our first-quarter results.”

Investors are keeping a close eye on further fallout. Richard Hunter, the head of markets at Interactive Investor said: “The reported liquidation of some block trades and a potential hedge fund default will be closely monitored by investors for any ripple effects over the coming days, although for the moment the moves appear to be confined to a handful of specific stocks.”

The Archegos fallout is the latest corporate crisis to put pressure on Credit Suisse, which was also dealt a blow after the supply chain finance firm Greensill Capital fell into administration this month. 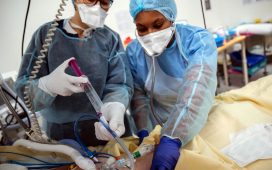