NHS heroes and an army of volunteers will hit the 15 million Covid vaccine target tomorrow.

The remarkable Valentine’s Day milestone means 80% in the most vulnerable groups are protected.

PM Boris Johnson said: “We have made huge progress. That’s great.” In a second boost he said he was “optimistic” lockdown could ease in a fortnight.

The lockdown-weary country gets a Valentine’s Day gift from the NHS tomorrow as its dedicated team hits the target of 15 million vaccinations.

The PM spread the love by saying he was “optimistic” the nation will begin to come out of lockdown in a fortnight.

Of the vaccine effort, he said: “We have made huge progress and that’s great.”

He spread the love even further, saying he was “optimistic” the UK can begin to come out of lockdown in a fortnight’s time – but warned restrictions would ease slowly.

But Shadow Health Secretary Jonathan Ashworth reflected the mood of a grateful nation by saying the success was down to the tireless work of doctors, nurses, GPs, pharmacists, soldiers and volunteers who made the remarkable rollout possible.

He added: “Going so quickly from labs to jabs is tribute to medical scientists and all the fantastic NHS staff. Each and every one is a hero we can all be proud of.”

The beginning of the end of lockdown will mean a phased return of schools on March 8 and scrapping the ban on meeting friends and loved ones outdoors.

The PM warned restrictions would be lifted slowly to avoid what he called “the reverse ferret” of a new lockdown.

From Monday, the next three million people on the vaccine priority list aged 65 to 69 can begin having jabs.

Another 1.8m aged 16 to 64 with underlying health conditions will also be protected.

One million in phase two have already been offered booking slots and 2.4m reminder letters are in the post.

Health Secretary Matt Hancock said the vaccination programme was “continuing at an unprecedented speed” and NHS boss Sir Simon Stevens called the widening of the rollout “an exciting moment”.

Hitting 15 million jabs by February 15 was the Government’s key goal in giving the vaccine to the elderly and most vulnerable, frontline NHS staff, care and social workers and care home residents.

More than 80 per cent of over-70s have had the jab and any who haven’t are urged to seek an appointment.

Veteran NHS staffers have come out of retirement to help with the vaccine rollout at 1,500 sites – including mosques, museums, sports grounds and cathedrals.

They joined soldiers, dental workers, trained volunteers and 200 phar-macies to deliver their target a day before the deadline Mr Hancock set them.

Mr Johnson gave a preview of the roadmap out of lockdown he intends to unveil a week tomorrow.

“I’m optimistic,” he said during a visit to the Fujifilm Diosynth Biotechnologies plant in Billingham, Tees-side, where 60m doses of the new Novavax vaccine will be made.

“But we have to be cautious,” he added.

Whitehall insiders said everything depends on what data shows this week.

But if infections and hospitalisations keep going down, people will be allowed to meet outside at the same point as their children go back to the classroom.

And if the return of schools does not cause a spike in infections, then non-essential shops will begin to reopen, followed by pubs and restaurants.

In other positive steps, the Oxford/AstraZeneca vaccine only licensed for over-18s will now be trialled in children.

Researchers are recruiting 300 volunteers to find out if those aged between six and 17 will get the same benefits from the vaccine as adults.

And top Israeli healthcare provider Maccabi said that out of 520,000 people given two doses of the Pfizer jab, not one had died of Covid.

The researchers said their findings show that the vaccine is effective against Covid’s Kent variant – but it was too early to say anything about its value in tackling the South African one.

Unlike in the UK, the Israeli government has been following the manufacturer’s own guidelines stating that both doses should be administered three weeks apart.

Israel has become the world’s testing ground for the vaccine’s effectiveness, as nine in ten over-60s have now had the jab.

Infection rates in that age group have fallen dramatically but are still rising among the under-59s.

Mr Hancock said vaccines are “our way out to freedom” as he revealed his ambition to have all UK adults vaccinated by September.

And he predicted that jabs used in combination with new medicines to treat Covid would mean the disease could be beaten by the end of the year.

Britain has so far approved the drugs dexamethasone and tocilizumab, which together lower death risk by 40%.

Mr Hancock said: “If Covid-19 ends up like flu through vaccines and treatments we can get on with everything again.”

And Mr Johnson added: “In due time it will become something that we simply live with. A new disease like this will take time for humanity to adapt to – but we are adapting.”

On Friday, the PM will hold a virtual meeting with US President Joe Biden and other G7 leaders to work out a global vaccination programme.

The UK has contributed £548million to international vaccinator Covax – but the organisation still has only two billion doses, a fifth of what it needs for people in poorer countries.

Independent SAGE’s Professor Anthony Costello, from the Institute for Global Health at University College London, warned that without worldwide immunity, vaccine-resistant mutant strains will be able to get into Britain.

“We’re in this together,” he said. “A vaccinated world protects all of us.”

Independent SAGE warns that it is still too early to come out of lockdown, saying it will be at least three weeks ­before jabs reduce the death rate significantly.

Professor Christina Pagel, of University College London, said: “We have a long way to go. There are still more people in hospital than during the first peak.”

Success… after all the failures

When Boris Johnson set up the Vaccine Task force in May last year, he gave it a clear goal. The instruction was unambiguous: to “consolidate Britain’s position at the forefront of global research and development”.

And amid all the Government’s botched pandemic failures, the vaccine programme shines internationally as a stunning success.

It has been a victory for British scientific skill and ingenuity, industrial scale and expertise, and political determination. The wheels began to turn in early January last year when Oxford University scientists realised the world was facing a deadly pandemic.

At a crisis meeting, Professor Sarah Gilbert, a vaccine researcher, revealed she had devised a possible vaccine based on a formula previously used to fight Ebola.

The race had begun. Her team’s biggest fear was Donald Trump would buy up all vaccine stocks.

AstraZeneca signed a production deal last April, telling No10 that it would produce jabs at cost price. The Government bought in early, doing deals with another six companies, including fizer/BioNTech.

Johnson set up the JVT under entrepreneur and biochemist Kate Bingham, and told the Treasury to start investing in protection against this and future viruses.

Health Secretary Matt Hancock boasted Britain’s exit from the EU allowed faster approval – a claim slated at the time but which gained credibility with the Brussels farce over supplies and comparative low jab levels on the Continent.

China and Russia have been marketing their own vaccines around the world. But they have not been subject to the same rigorous testing standards as Britain’s regulators, who pulled out all the stops to deliver safely in record time.

Margaret Keenan, 90, was first in line for her jab as UK doses began to roll out on December 8 – and the huge national effort has seen an army of volunteers, including celebritites, pitch in to help.

Downton actor Hugh Bonneville and TV presenter Vernon Kay were among star volunteers this weekend while Ruth Langsford was proud to pose while she got her shot.

Today marks the symbolic target on the road to getting Britain back on its feet. There is growing speculation it might do the same for Boris’s political prospects – at least in the short term.

How we compare with other nations: The percentage of populations that had got at least one vaccine dose as of today and the number of people covered.

The list reads country / percentage / and number of population. 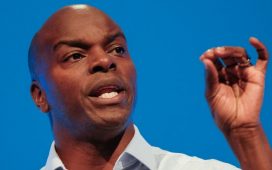 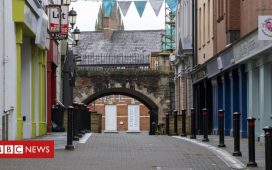 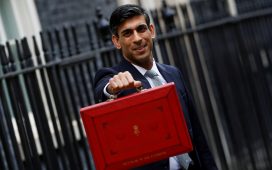 What is the red Budget Box and what is in the Chancellor’s despatch box? 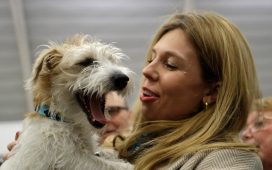 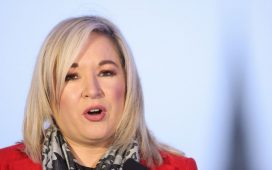