Companies included on the government’s approved Covid-19 travel test provider list appear to be flouting consumer law by refusing to refund customers for unfulfilled orders, according to dozens of travellers who have contacted the Guardian.

Boots is among the firms whose terms and conditions state that orders for tests are non-refundable even if they fail to materialise despite the Consumer Rights Act allowing customers to claim money back if an order or service is not as described or fit for purpose.

Another test provider has threatened legal action against customers who complain about missing tests.

It comes as Sajid Javid, the health secretary, said on Sunday that he wanted to scrap the costly PCR test requirement for people returning to the UK from some countries as soon as possible.

“The PCR test that is required upon your return to the UK from certain countries, look, I want to try to get rid of that as soon as I possibly can,” Javid told Sky News.

“I am not going to make that decision right now but I have already asked officials that at the moment we can, let’s get rid of these kind of intrusions, the costs that generates for families, particularly families just trying to go out and holiday.”

Rules currently require arrivals from countries on the government’s green and amber list to pay for PCR tests on or before day two after they return. Those who have not received both vaccines also have to take a test on day eight from amber list countries and failure to comply can result in a fine of up to £2,000.

The government website directs travellers to an official list of test providers who have self-declared that they meet minimum standards.

According to the Department of Health and Social Care, companies have been removed from the list for misleading price claims, but complaints from customers suggest that no action has been taken against firms that fail to fulfil orders and rely on unfair terms and conditions to evade refunds.

Richard Claughton and his wife, both NHS workers, paid Boots £150 for two day two tests after a trip to Spain to visit family in July. Only one test kit arrived, damaged beyond use six days late.

Boots refused to refund them, claiming that, according to its terms and conditions: “The service is deemed to have been provided in full by Boots and ReCoVa-19 by providing the customer with their booking reference number.”

The company told the Guardian that, instead of a refund, missing or faulty kit would be replaced free of charge. A replacement in Claughton’s case would have meant his test results arriving after his official quarantine period had ended.

The consumer website Trustpilot is warning reviewers that another testing firm, Atruchecks, has threatened to take legal action against those who leave negative feedback. All reviews since June have rated it “bad”, citing the non-delivery of testing kits, misleading pricing and unresponsive customer service.

The company, owned by the 2015 Labour candidate for Surrey Heath, Laween Al-Atroshi, has also emailed customers warning that those frustrated by its lack of communication will be reported to the police if they “intimidate” staff.

One customer received the warning after her five emails of complaint went unanswered.

“My emails were perfectly polite but the company had the audacity to send out an email accusing clients of abuse and claiming that they had had to appeal to Scotland Yard,” she said.

Atruchecks’ terms and conditions also state that its service is non-refundable, and a message on its helpline directs all callers to its website or email address. It still appears near the top of the government list that ranks providers according to price. The company did not respond to requests for a comment.

The kits arrived but the results did not, meaning she had to self-isolate for a further five days. She was eventually sent a replacement day five kit and received the results after her quarantine officially ended. The company told her she was not entitled to a refund as it was not liable for delays at its laboratory. “A replacement day five kit on day 10 is a bit like free tickets for a flight that departed last week,” she said.

Rightangled’s terms and conditions state that once a booking reference has been sent, the service is strictly non-refundable and it declines responsibility for delays, damage or missing deliveries. Under the Consumer Rights Act, traders are responsible for the safe delivery of an order. Rightangled refunded Simon after contact from the Guardian but failed to respond to a request for a comment.

Gary Rycroft, a partner at the legal firm Joseph A Jones & Co, said terms and conditions that rule out refunds for service failures might be unlawful, especially given the premium prices charged by testing companies.

“I am confident a court would find that a consumer would only enter into a contract for this service on the basis that it’s delivered according to the required timescale, so failure to perform the contract within the timeframe is a fundamental breach of it,” he said. “It’s also unlawful to try to shift responsibility on to third parties in the supply chain.”

The DHSC said it was introducing spot checks to ensure that listed companies comply with the rules.

“We are reviewing all private providers to ensure they meet our robust standards,” a spokesperson said. “We have already removed 57 providers from the approved list, and more than 80 private travel testing companies have been issued a warning for inaccurate pricing.”

On Friday the Competition and Markets Authority advised the government that it should make checks on providers and remove those that did not meet basic standards from its list.

It had already threatened legal action against 19 unnamed companies over misleading prices.

It declined to comment on whether the 19 were still on the government list or whether it was investigating reports of customer service failures by Atrucheck. 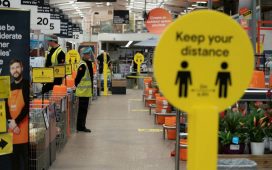 Kingfisher to raise dividend and buy back shares after profit surge

Fresh calls for windfall tax on companies that prospered during Covid