NEWSCABAL > world > Covid pandemic ‘nowhere near finished’ as super variants are spawned from ‘tsunami’ of new cases, WHO warns
world

Covid pandemic ‘nowhere near finished’ as super variants are spawned from ‘tsunami’ of new cases, WHO warns


COVID’S grip on the world is “nowhere near finished” as super variants are spawning a surge of new cases, the World Health Organisation (WHO) has warned.

Its special envoy Dr David Nabarro, said the UK is bucking the trend with falling cases and deaths while in most parts of the globe coronavirus is rampant.

Addressing the Royal College of Physicians of Edinburgh, Dr Nabarro said new variants will be a “regular” occurrence while the virus is still prevalent around the world.

He warned: “The pandemic is nowhere near finished.

“Each week we have seen four and a half million cases being reported and know those are an enormous underestimate.

“And we are still seeing a really significant number of deaths – nearly three million.

“What I want to stress is that the pandemic is surging forward everywhere.”

Covid-19 rates are soaring in India, with more than 180,000 new infections detected since Tuesday as people flock in their millions to religious festivals and political meetings.

The South Asian country has so far confirmed more than 13.9 million cases and 172,000 dead in what is likely to be an undercount.

Dr Shashank Joshi, a member of the Mumbai Covid taskforce, said: “This sheer tsunami of cases has already overwhelmed the healthcare infrastructure in the state.

“This time we are seeing younger people between 20 and 40 getting seriously affected and even children are now being hospitalised.”

Earlier this week it overtook Brazil to become the second-most affected country globally by the coronavirus.

And it is feared India will now become a breeding ground for lethal mutant viruses like the South American country which has recorded 358,718 deaths.

France, Germany and several other states have extended lockdowns, and German doctors warn that more young people are being hospitalized with the virus.

Sweden, which has never had a harsh lockdown recorded the highest number of Covid-19 infections per capita in Europe last week.

The lockdown-averse country recorded 625 new infections per million people in the last week, vastly higher than its Scandinavian neighbours, with Finland, Norway and Denmark, recording 65, 132 and 111 cases per million respectively.

It also had more patients in intensive care than at any other time since the first wave of the pandemic last spring.

Meanwhile, in the UK Covid deaths plunge by 16 per cent in a week with 38 fatalities and 2,491 cases recorded in last 24 hours with the country finally emerging from lockdown.

But Dr Nabarro urged against complacency

He said: “The current UK situation is going against the trend of the global advancement… but please do not think this pandemic is over because it is not.

On the lifting of restrictions in the UK and the success of the vaccination programme, he added: “(Some say) this is an opportunity for the UK to emerge from the pandemic, well I say ‘perhaps’.

“I have to stress that I am not 100 per cent sure that the world is going to find it too easy to vaccinate itself out of this pandemic because of the emergence of variants that are capable of escaping the protection of current vaccines.”

Daughter, 23, found dead by mum after staying behind as family went on holiday

So far EU vaccine rollout has been shambolic and has been slammed by the World Health Organisation for being “unacceptably slow”.

Just 19.4 per cent of the EU’s adult population have received their first dose of a coronavirus vaccine so far, according to the European Centre for Disease Prevention and Control’s Covid Vaccine tracker.

That is compared to the UK’s roll-out which has more than half of its adult population given their given jab.

The EU’s vaccination progress took a setback after Denmark dropped the  AstraZenica jab over blood clot risks, despite a review finding the danger of a clot is minuscule. 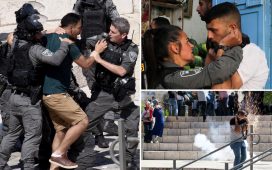 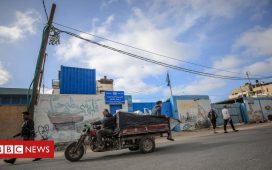 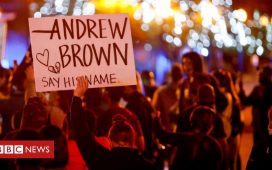