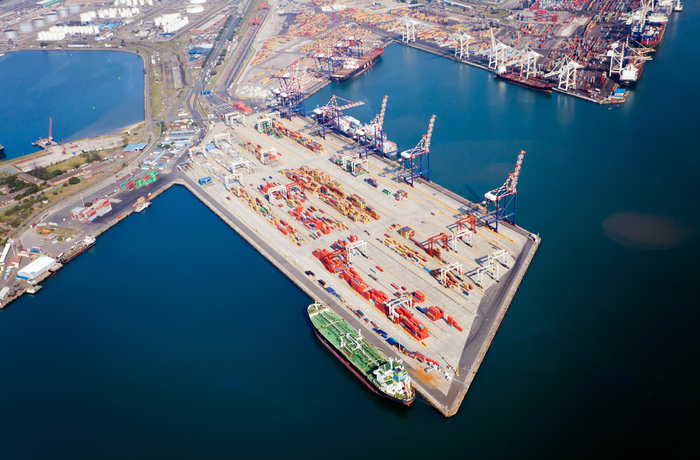 The number of new cases in the city of Durban alone (port pictured) has surged this week, with more than 20,000 new cases reported in the last two days. Photo credit: Shutterstock.com.

Hapag-Lloyd and Ocean Network Express (ONE) say Asia-South Africa services are disrupted by an outbreak of the coronavirus disease 2019 (COVID-19) among crew on board two container ships transiting from China. The vessels are currently anchored under quarantine guidelines near Hong Kong.

The two carriers confirmed one crew member onboard the 4,432 TEU box ship Bangkok Bridge had tested positive for the virus on arrival at Shekou, one of the three Shenzhen container terminals. The vessel called at Nansha near Guangzhou on Monday.

With the outbreak confirmed, ONE said the vessel’s sailing schedule would now be disrupted with dates for its remaining calls, including ports at Singapore and Port Klang, unable to be confirmed. Ships must undergo a 14-day quarantine if anyone onboard is found with the virus. The Bangkok Bridge is deployed on the South Africa Asia Express 2 (SA2) service.

In a customer advisory on Friday, Hapag-Lloyd confirmed the 5,090 TEU Ital Lirica would also be delayed after a seafarer tested positive while the ship was on its way from Ningbo to Singapore. The ship is deployed on the South Africa Asia Express 1 (SA1) service, operated in conjunction with Zim Integrated Shipping Services.

ONE added that ships operating its South Africa Central service, including the 4,250 TEU Cosco Surabaya and 4,800 TEU Zim Shanghai, were being delayed by up to a week before being allowed to berth in Durban due to an increase in virus infections. The number of new cases in the city alone has surged this week, with more than 20,000 new cases reported in the last two days.