Children aged 12 to 15 will start being invited to get their coronavirus jabs from next week, the government has confirmed.

Health Secretary Sajid Javid said he had accepted the recommendation from the UK’s four chief medical officers to offer them a first dose of the Pfizer vaccine.

In a statement to the Commons, vaccines minister Nadhim Zahawi said: ‘We will now move with the same urgency we’ve had at every point in our vaccination programme.’

The move means three million children could be eligible for the jab, with vaccinations to be administered through schools.

Formal announcements are expected from the devolved administrations for Scotland, Wales and Northern Ireland.

Mr Zahawi has said parental consent will be needed for vaccinations of 12 to 15-year-olds, but children can overrule parents who do not want them to get the jab if deemed ‘competent’.

He told the Commons: ‘As with all vaccinations for children, parental consent will be sought. The consent process will be handled by each school in their usual way and will provide sufficient time for parents to provide their consent.

‘Children aged 12 to 15 will also be provided with information usually in the form of a leaflet for their own use and to share and discuss with their parents prior to the date of the immunisation and that scheduled time for it.

‘Parental, guardian or carer consent will be sought by the school age immunisation providers prior to vaccination in line with other school vaccination programmes.

‘In the rare event that there is a situation a parent does not consent but the child or the teenager wants to have the vaccine, then there is a process by which the school age vaccination clinician will bring initially the parent and the child to see whether they can reach consensus and if not, if the child is deemed to be competent, then the vaccination will take place.’

Mr Zahawi alsoi insisted a child’s education will not be dependent on their vaccination status.

Conservative former minister Steve Baker asked: ‘Will he guarantee that a child’s ability to receive an education equally with their peers will never be linked to their vaccination status?’

The vaccines minister replied: ‘That will not be used in any way. The whole purpose of this is to accept the clinical advice and protect children.’

The decision to go ahead comes despite the Joint Committee on Vaccination and Immunisation (JCVI) deciding not to recommend mass vaccination of 12 to 15-year-olds.

The JCVI had said Covid-19 presents a very low risk for healthy children and vaccination would only offer a marginal benefit.

But they suggested that the wider issues, such as education, should be taken into consideration and examined by the CMOs.

At a Downing Street press conference, Professor Wei Shen Lim, from the JCVI, said there was ‘no conflict’ between the advice provided by the JCVI and that from the CMOs, adding that the JCVI had looked at jabs from a health perspective.

England’s chief medical officer Professor Chris Whitty said it had been a ‘difficult decision’ regarding vaccinating children but CMOs would not be recommending the jabs ‘unless we felt that benefit exceeded risk’.

In their advice to the Government, the UK’s CMOs said they were recommending vaccines on ‘public health grounds’ and it was ‘likely vaccination will help reduce transmission of Covid-19 in schools’.

They added: ‘Covid-19 is a disease which can be very effectively transmitted by mass spreading events, especially with Delta variant.

‘Having a significant proportion of pupils vaccinated is likely to reduce the probability of such events which are likely to cause local outbreaks in, or associated with, schools.

‘They will also reduce the chance an individual child gets Covid-19. This means vaccination is likely to reduce (but not eliminate) education disruption.’

The CMOs have asked for the JCVI now to look at whether second doses should be given to children and young people aged 12 to 15 once more data comes through internationally.

This will not be before the spring term.

The US has collected a large amount of safety data on vaccinating children aged 12 and over with Pfizer.

The AstraZeneca vaccine is currently not recommended for anyone under the age of 18.

The CMOs think a single dose of Pfizer will reduce significantly the chance of a young person getting Covid and passing the virus on.

Clinical evidence shows that a single dose of Pfizer cuts the risk of catching the Delta variant of Covid-19 by 55% and has a much higher effect on preventing severe illness and death. It also cuts transmission.

See also  Labour calls for next year’s GCSEs and A-levels to be delayed
Share on FacebookShare on TwitterShare on PinterestShare on Reddit
newscabalSeptember 13, 2021

Mary Beard: ‘If we want to understand the pandemic, we need the arts’

Give £200 to every child for catch-up lessons – Lib Dems 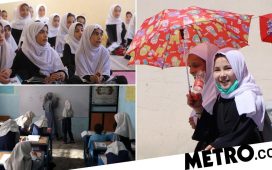