For four consecutive days since November 17, no new death as a result of coronavirus complications has been recorded in Nigeria, leaving the current fatality toll at 2,973.

According to the data from the Nigeria Centre for Disease Control (NCDC), the last time Nigeria recorded a fatality was on November 16, when five deaths were confirmed.

Lagos still has the highest number of deaths with 753 fatalities, followed by Edo with 280, and the FCT with 224.

On Saturday, 45 new cases were confirmed in five states and the federal capital territory (FCT).

According to the breakdown, Anambra recorded the most new cases with 18 positive samples, followed by the FCT with 15, and Lagos with nine.

Other states that recorded new infections include Bauchi (1), Kano (1), and Rivers (1).

The agency, however, said the cases reported on Saturday include a backlog of positive samples from Anambra and the FCT.

The NCDC also confirmed 185 new recoveries, raising the total number of patients discharged in the country to 206,486.

According to the agency, the patients discharged on Saturday included community recoveries from the FCT.

Out of 213,532 coronavirus infections that have been confirmed in Nigeria, there are currently 4,073 active cases being managed across states. 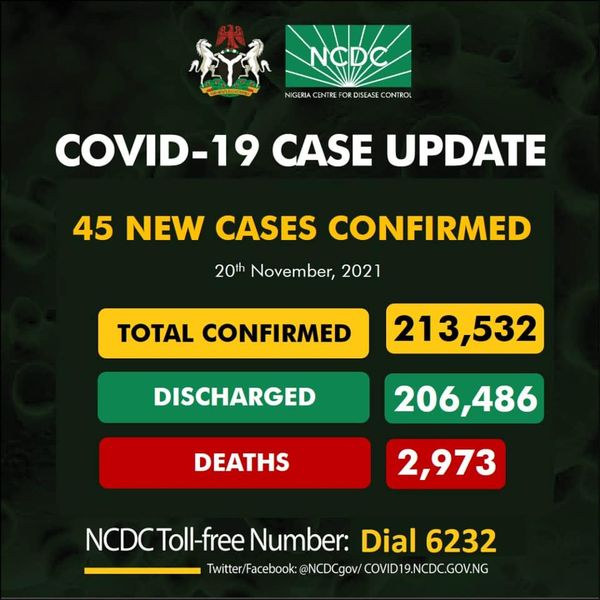