Nikkei Asia is tracking the spread of the new coronavirus that originated in the central Chinese city of Wuhan.

For more information about the spread of COVID-19 and the progress of vaccination around the world, please see our interactive charts and maps.

— Status of vaccinations around the world

4:00 p.m. Indonesia expects to receive 20.2 million doses of vaccines developed by Moderna and China’s Sinopharm from the second quarter to use in a private vaccination scheme. The country authorized one of the world’s first private vaccination programs last month to run concurrent to its national effort, enabling companies to buy state-procured vaccines for staff. While the plan is expected to speed up inoculations, some have warned it could worsen inequity.

3:08 p.m. Tokyo confirms 175 infections, down from 239 a day earlier. But with the seven-day average of daily cases in the capital rising 13.5% from a week ago to 287, the central government may find it difficult to lift the emergency on March 21 as planned.

11:20 a.m. China’s industrial output grew 35.1% in January-February from a year ago, faster than the 7.3% gain in December, official data shows, adding momentum to a solid recovery. Retail sales increased 33.8% from a year earlier in the first two months, compared with a rise of 32% expected by analysts, marking a notable jump from 4.6% growth in December. 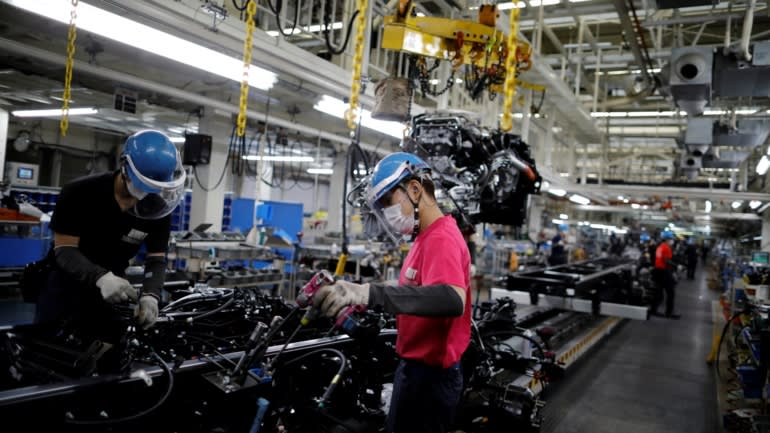 Employees of Mitsubishi Fuso Truck and Bus in Japan in May 2020: The country continues to try and pull itself out of the coronavirus-induced slump.

9:45 a.m. China reports five new cases for Sunday, down from 10 a day earlier. All of the new cases originated from overseas. The number of new asymptomatic cases, which China does not classify as confirmed cases, fell to nine from 10 cases a day earlier.

9:00 a.m. Japan’s core private-sector machinery orders fell 4.5% in January from the previous month, the first drop in four months, with declines seen in a wide range of sectors that have been recovering from the pandemic-induced slump. By sector, orders from manufacturers fell 4.2% month on month in January due to electrical machinery and chemicals, while service-sector orders tumbled 8.9%, down for the first time in four months.

8:04 a.m. The Netherlands will suspend use of AstraZeneca’s vaccine until at least March 29 as a precaution. The move follows a similar decision by Ireland earlier in the day. The Dutch decision is based on reports from Denmark and Norway of possible serious side effects, the government said. The Netherlands’ halt of the AstraZeneca jabs follows a similar decision by Ireland.

3:30 a.m. AstraZeneca said it had conducted a review of people vaccinated with its vaccine and found no evidence of an increased risk of blood clots. The review covered more than 17 million people vaccinated in the EU and the U.K.

11:30 p.m. Anthony Fauci, the top U.S. infectious disease expert, says he hopes former President Donald Trump will push his supporters to get vaccinated and emphasized that pandemic-related restrictions should not be lifted prematurely. Fauci said on the “Fox News Sunday” program: “I think it would make all the difference in the world. … [Trump] is such a strongly popular person … it would be very helpful for the effort for that to happen.”

8:59 p.m. Bahrain eases some coronavirus restrictions, including allowing indoor dining at restaurants and reopening educational institutions, as case numbers fall. Restaurants and cafes, which had been limited to takeaway meals since late January, can open with no more than 30 customers at a time.

2:23 p.m. The CEO of U.S. cruise operator Carnival anticipates at least two more tough years for the cruise industry, which is unlikely to return to pre-pandemic levels until at least 2023, the Financial Times reports.

11:39 a.m. Singapore Prime Minister Lee Hsien Loong says in a TV interview he hopes Singapore would start reopening its borders by the end of the year as more countries ramp up vaccination drives. “I hope if that many countries can have substantial proportions of their populations vaccinated by later this year, we will be able to have the confidence and to have developed the systems to open up our international borders to travel safely again,” Lee said in an interview with the BBC that aired on Sunday.

9:01 a.m. The CEO of British Airways says vaccinated people and those not vaccinated but who test negative for the coronavirus should be allowed to travel without restriction, as he offered his ideas for a travel restart a month before the U.K. government finalizes its plans.

5:55 a.m. Australia’s center-left Labor Party is reelected in the country’s fifth-most populous state after voters backed the party for implementing some of the country’s most stringent coronavirus curbs. Labor is projected to win all but seven seats in Western Australia’s parliament.

7:56 p.m. China’s foreign ministry in Hong Kong says it will simplify mainland China visa applications for foreigners in the city who have been inoculated with Chinese-made vaccines, effective Monday.

2:14 p.m. The Philippines has detected its first case of a highly contagious coronavirus variant first identified in Brazil. A Filipino returning from Brazil tested positive for the P. 1 variant.

10:34 a.m. South Korea reports a three-week high of 490 new cases, with infections edging higher as authorities prepare for a broad vaccine rollout. The daily tally as of Friday midnight was up slightly from 488 the day before to the highest since Feb. 19. Of Friday’s total, 474 were locally transmitted infections and 16 imported.

To catch up on earlier developments, see the last edition of latest updates. 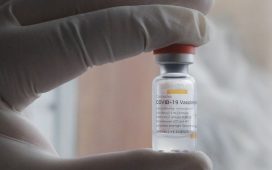 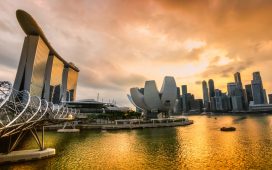