Coronavirus fears see stockpiling of food and medicines across UK


Food, medicines and other essentials are being stockpiled by people across the UK over fears the coronavirus outbreak may leave them house-bound or unable to buy necessities.

As the number of covid-19 cases continues to rise, Guardian readers said they were concerned about being forced to self-isolate at home, along with the prospect of city “lockdowns” limiting the availability of goods, and many are now taking matters into their own hands.

Efrim Nicholas, who lives in Salisbury, has done her first online shop for more than a decade as her family do not have a car and are preparing for a worst-case scenario. Like many others, she has stocked up on pasta, dried fruit, UHT milk, and other long life items.

“We just wanted to have a safety net because we don’t have masses of confidence in the government response,” the 33-year-old said. “Hopefully it won’t be necessary, but better safe than sorry.”

Ocado, the online supermarket, said customers should order their food two to three days earlier than normal due to “exceptionally high demand” and the fact that “more people than usual seem to be placing particularly large orders”. Shoppers have also pictured shelves in some supermarkets laying empty.

Roger, 66, from Hastings, has stocked up on a month’s worth of non-perishable groceries for his two vulnerable elderly neighbours. “The only problem was, when I went down to Sainsbury’s, they had almost been cleared out of Dettol, only half an hour after opening,” he said.

“Other than hand sanitiser which I couldn’t find, everything else was there, just getting low. People were stocking up with non-perishables to the top of the trolley.”

He added: “It’s not panic-buying, I think people are just being cautious and buying stuff for storage.”

He hasn’t told his neighbours about the stockpile, and is keeping everything in his shed, ready to offer it if necessary: “I can look after myself, I’m young, but my neighbours aren’t so that’s why I’m doing it for them.”

Steve, from Northamptonshire, brought the last available masks in a hardware store along with latex gloves and stocks of disinfectant. “I have 100 toilet rolls,” he said. “I doubt this would last a family of four long but it’s a start. The NHS and public sector is stretched already and we’ll be on our own.”

A woman from Wychavon, who wished to remain anonymous, is among a number of others who already accumulated a surplus of long life goods due to fears of a cliff-edge scenario if the UK suddenly exited the EU.

“I was one of those people who everyone laughed at because I stocked up due to Brexit,” she said. “So I just looked into the cupboard and worked out what I have still got.”

She topped up on porridge, lentils, rice, pasta and tinned tomatoes, and froze bread, and has stopped drinking milk to prepare for the potential of not having any.

“I’m anxious but maintain a veneer of calm and conceal it by prepping,” she said. “I’ve got so much and I can manage frugally. I could manage for weeks and weeks and weeks.”

Others are stockpiling essential medicines, from cold and flu remedies – in the absence of a medicine for the coronavirus – to reserves of drugs for long-standing illnesses.

“My husband has psoriatic arthritis, a chronic autoimmune condition, and has already lost the use of one of his fingers,” said Emma McIness,” a businesswomen from Kent who does not allow people to enter her home with a cold.

“He self-injectsa biologic medication, and it is important he keeps up with it to protect his joints so we’ve brought many weeks of supplies.”

Ian, 52, from north London, has seen empty shelves at his local Sainsbury’s but is trying not to get too alarmed. He isn’t stockpiling, but is finding himself buying a little bit more than usual.

“Rationally you’re thinking ‘It’s not going to affect me’, and then you come out [the shop] and you’ve got an extra packet of pasta and four extra tins of tomatoes,” he said. 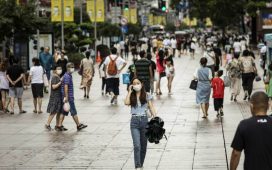