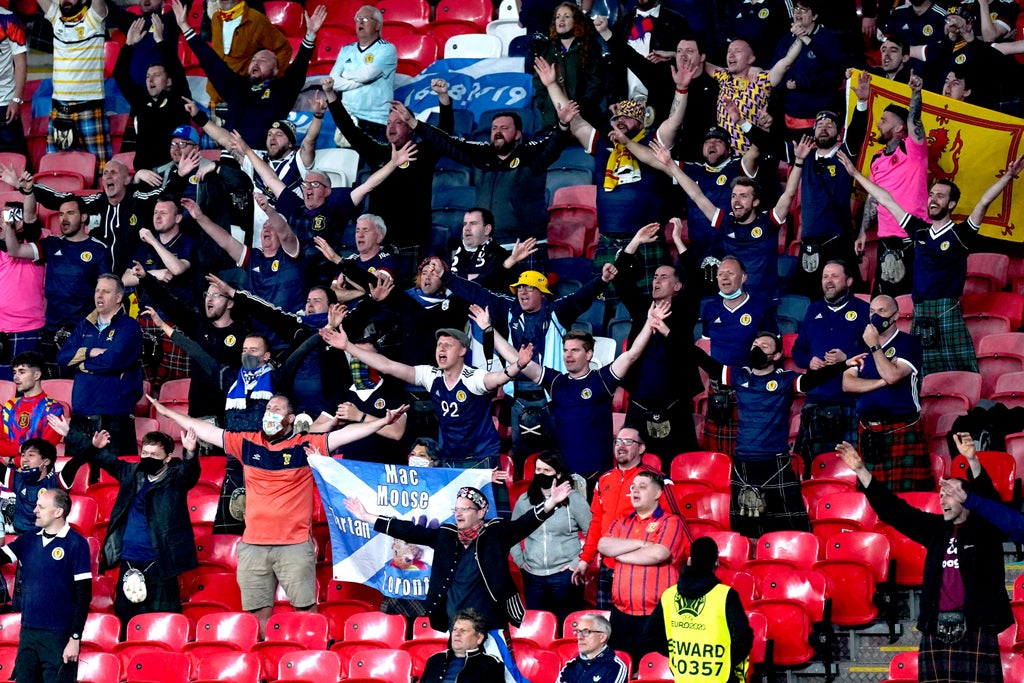 Almost 1,300 people in Scotland tested positive for coronavirus after travelling to London to watch a Euro 2020 match, Public Health Scotland (PHS) has confirmed.

Roughly 400 of these fans were at Wembley to see the England vs Scotland game on 18 June, while the others watched it from elsewhere in the English capital.

The 1,294 infections connected with the group fixture make up approximately two-thirds of the 1,991 cases which have been linked to football supporters in Scotland.

Nearly three-quarters of cases connected to Euro 2020 have been detected in people aged between 20 and 39, with men accounting for 90 per cent of these infections.

In a report, PHS said there had been a “relatively small number” of cases connected to the Scotland vs Croatia and Scotland vs the Czech Republic games in Glasgow. There were 38 and 37 recorded coronavirus infections respectively.

Fifty-five people were also confirmed to have the disease after attending a fan zone at Glasgow Green earlier this month.

“PHS is working with Test & Protect and NHS boards to ensure that all public health actions are taken in the close contacts of these Euro 2020 cases as part of the 32,539 cases that were reported to the Test & Protect Case Management System during this period [June 11-28],” the health body said.

The statement comes a day after Scottish health minister Humza Yousaf drew a link between his country’s surge of Covid-19 cases and the Euros.

Speaking to the BBC’s Good Morning Scotland programme, the SNP politician said the data is “skewed disproportionately towards young males, those under 40”.

“A number of people, public health experts and others, have commented that that association is probably as a result of greater indoor gathering which could be an effect relating to watching the Euros and football,” he added.

On Tuesday, an analysis by PA revealed that areas of east-central Scotland had the highest transmission rates of anywhere in the UK.

In the week to 24 June, East Lothian was the worst-affected area in the UK with 595.8 cases per 100,000 people. Dundee, Midlothian and Edinburgh were also in the top five hardest-hit regions that week.