Alison King reportedly left the National Television Awards early last night amid reports she was escorted out for being drunk.

A video shared online appears to show her being led out of the ceremony.

The bash can often be a time when TV stars let their hair down and raucous behaviour has not been out of the ordinary in years gone past.

This time, a member of the audience at the O2 arena shared a video of Coronation Street star Alison, being led away from the seats at around 9pm, with some awards still to be revealed.

The onlooker claimed that Alison, who plays Carla Connor in the ITV soap, may have undertaken in a glass too many of the good stuff.

Capturing the moment that Alison was escorted away, the person who shared the video online captioned the clip by joking that she was “absolutely t*****ed”.

This was reaffirmed by another member of the audience, who posted on Instagram a snap of Alison standing among the seats.

They captioned the pic: “Just to let y’all know, I was in the audience at the #NTAs and Carla from Corrie had to be carried out of the audience cos she was so p***ed [laughing face] this was at 9pm”.

In the clip that has been shared online, Alison is seen being led away from the seats by a blonde-haired woman, who has linked arms with the Corrie regular.

Alison had arrived at the event, earlier in the evening, in elegant style as she wore a strapless black gown that had a thigh slit up the leg.

There was disappointment at the end of the night for the cast of Corrie after they were once again beaten to Best Serial Drama prize by fellow ITV soap Emmerdale.

Coronation Street were heavily tipped to win it this year after recent success by the Emmerdale cast but were pipped to the award once again. 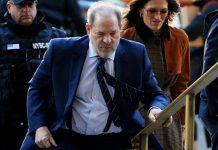