Conor McGregor can rest slightly easier knowing he will have one less threat to face when he arrives on Fight Island for his clash with Dustin Poirier next month.

The Irishman will make his first appearance in the Octagon in a year in the rematch with Poirier in Abu Dhabi.

And while McGregor has no concerns about facing off with the American again, there was also the small matter of Khamzat Chimaev’s presence to contend with.

Chimaev shares a manager with McGregor’s fierce rival Khabib Nurmagomedov, and recently made a vow to attack the Notorious superstar if their paths crossed in the Middle East.

“If I see him on Fight Island, something will definitely happen,” Chimaev said. “The UFC needs to hide him.”

“Honestly speaking, I wanted to beat him up,” Chimaev added.

The up and coming Swedish fighter even tried to track down McGregor in Dublin once before, stating he was going “to protect our pride and honour; I was going there for all of us.”

Chimaev was angered by McGregor’s long-running feud with Nurmagomedov, but will no longer be competing on Fight Island.

He was due to compete in the main event against Brit Leon Edwards just three days prior to McGregor’s match-up with Poirier.

However, the unbeaten Chimaev has now been forced to withdraw from the fight for an unspecified reason, according to MMA Fighting and Frontkick.

It is the second time the clash has been called off, after their previous encounter scheduled for December 19 was postponed due to Edwards testing positive for Covid-19.

Who will win out of McGregor and Poirier? Have your say below.

UFC are yet to confirm whether the bout will be rescheduled again, or if a new fighter will stand in for Chimaev to fight against Edwards.

Meanwhile Nurmagomedov will be attending Fight Island as a spectator, and UFC president Dana White is planning to try and persuade the Russian to come out of retirement.

“When I fly out there (to ‘Fight Island’), Khabib is going to be there, too. I’m going to meet with Khabib while I’m there,” White told the SHOUT! Buffalo podcast.

“In a perfect world, if Conor wins this fight, I’d love to see the rematch with him and Khabib. It’s the biggest fight that can be made, and it’s the fight that makes sense.” 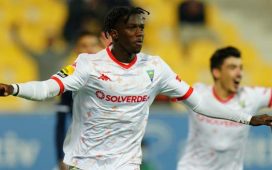