On a recent frosty night, Ralf Petgen made use of the light of a full moon to check every hour on the state of his riesling grapes. The weather forecast over the two previous days had given the winemaker hope that for the first time in years he would fulfil his dream of harvesting his grapes in a frozen state and turn them into Eiswein.

“The temperature needs to be -7C, no warmer than that,” he said. “And we hadn’t had it as low as that while the grapes were still in a healthy state, since 2012.”

After harvesting most of his grapes in the autumn, Petgen risked leaving two rows – about 400 vines – hanging on the Sehndorfer Marienberg, a shell limestone slope on his estate in Saarland, western Germany, and crossed his fingers, hoping he could keep the main threats of disease, birds, insects and rot at bay. Then he prayed for Jack Frost.

At 5am, with the temperature at -6C, he put in a wakeup call to some friends and neighbours, asking them to come to his aid. By 7am, after a sleepless night, the thermometer was finally at the critical -7C. Within half an hour, as the sun had begun to rise, the ungloved but hearty and nimble-fingered pickers had filled 20 vats with the round, icy, citrus-scented jewels, in which the water had frozen, but crucially the sugar had not.

From them, Petgen’s wine press – activated before the grapes had time to thaw – was able to extract about 150 litres of juice. His one chance to make it work, after successive years of disappointment owing to lack of frost, had paid off.

Petgen’s frosted grapes reached 135 degrees on the Oechsle scale – the measure German winemakers use to quantify the density of the must, or freshly crushed grape juice – the first stage in wine-making. Though of little meaning to the uninitiated, Petgen said the measure was “impressive”.

Eiswein, a sought-after sweet dessert wine, has become a rarity in recent years. “In the 1960s and 70s, making eiswein was a really regular occurrence,” said Petgen, whose family has farmed the Petgen-Dahm vineyards in the Mosel valley, close to Luxembourg, since the 17th century. “Now due to global warming, it feels like you might get one chance in a decade if you’re lucky.”

The last few years, he said, “the winters were so mild, it didn’t get cold enough until January or February by which time the grapes are wet and rotten and dropping off the vine”.

Petgen recognised winters were getting milder and deliberately planted the riesling grapes a decade ago on the Marienberg, 270 metres above sea level, where temperatures are on average 1.5C cooler than 100 metres lower down, where most of his vines are planted – typical behaviour of a winemaker with an interest in eiswein production in Germany’s most prestigious wine region. In decades past, Petgen would have reserved as many as 2,000 vines for its production, but these days the risk that the harvest will fail is too great, said the 63-year-old, who farms with his wife, Brigitte.

The wine comes in long, thin 375ml bottles, which can sell for several thousand euros each, although Petgen’s prices are far more modest, at about €200 (£182) a litre.

Stuart Pigott, a leading wine writer in Germany, said that just as global heating has led to a succession of bumper wine harvests – “the last bad harvest was in 1987” – so the climate emergency has almost ended eiswein production.

“Eiswein has become the white whale of German wine,” he said. “Those who manage to make it, do so because they occasionally get lucky. This rarity will of course increase its value.”

As well as planting vines higher up, as Petgen has done, Pigott said another strategy used by winemakerswas to “look for frost hollows – where the warm air rises and the cold air falls, collecting in the hollows”.

Describing eiswein’s acquired taste, he said: “It is unctuous and honey sweet with an enormous natural acidity which gives it a great vitality. It steamrollers its way over everything, blasting through caramel and chocolate.” Connoisseurs say it is best consumed alongside hearty puddings and patés.

Petgen had already had impressive yields from his grauer burgunder, gewürztraminer and auxerrois grapes this year, in what is generally considered a bumper harvest, even though 2019 was even more spectacular. But his riesling eiswein he said, “is the jewel in the crown, the icing on the cake, if you like. It doesn’t make much economic sense but the satisfaction from the winegrower’s point of view is immense.” 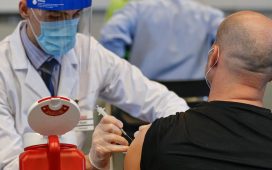 Armin Laschet: is the conservative alliance pick ‘too nice’ to be Germany’s next chancellor?

Armin Laschet to run as CDU/CSU candidate in German election