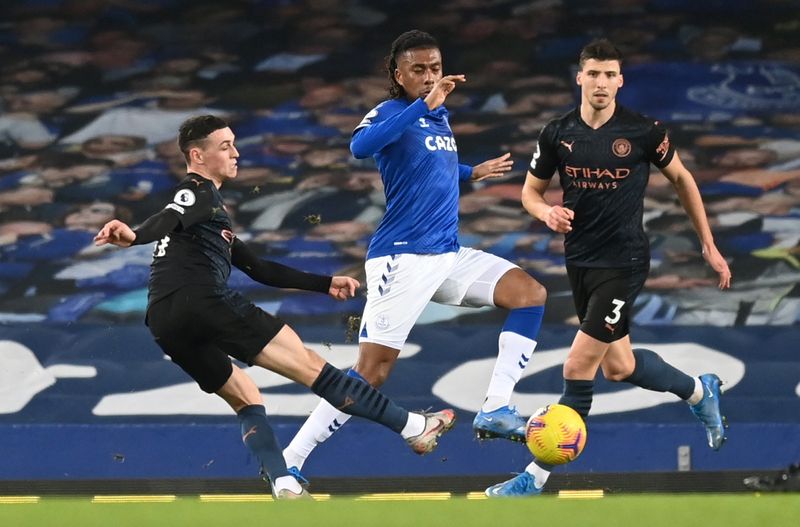 LIVERPOOL, England (Reuters) – Premier League leaders Manchester City turned on the style as they moved 10 points clear at the top with a ruthless 3-1 win at Everton on Wednesday.

City’s 17th straight victory in all competitions put them firmly on course to claim their third Premier League title in four years.

Adding to their strong position, key midfielder Kevin De Bruyne came off the bench to mark his return from a hamstring injury and with the club’s all-time scorer Sergio Aguero also close to match fitness, it is hard to see anyone stopping Pep Guardiola’s side.

City were without in-form midfielder Ilkay Gundogan for this re-arranged fixture, but looked confident from the outset.

A deflected, but sweetly struck, shot from Phil Foden put City ahead at Goodison Park in the 32nd minute but Everton struck back quickly when Lucas Digne’s shot hit the post and was turned in by Richarlison.

It was the first goal City have conceded from open play since Jan. 3.

Although Everton stuck at their task well, however, they were undone by two excellent goals after the break.

Bernardo Silva teased the Everton defence on the right flank before slipping the ball to Riyad Mahrez who unleashed an unstoppable curling drive with his left foot which crashed in off the far post.

It was all over when, after a typical City passing move, Silva jinked past Michael Keane and drilled a low shot which Everton keeper Jordan Pickford could only get a futile hand to.

Guardiola was pleased his team avoided the temptation to rush their attacks.

“We have the quality up front but it comes through the passes and when we arrive in the final third we want to attack too quick, we have to have patience. The second goal is an example of that, if you can’t find (the opening), make an extra pass,” he said.

City have 56 points from 24 games with Manchester United and Leicester City both on 46 points from the same number of matches.

Everton manager Carlo Ancelotti said he felt his team had lost to the future champions.

“It’s hard to say another name. At the moment they are the best team, they have quality, power, belief. It is very difficult to compete with them,” the Italian said.