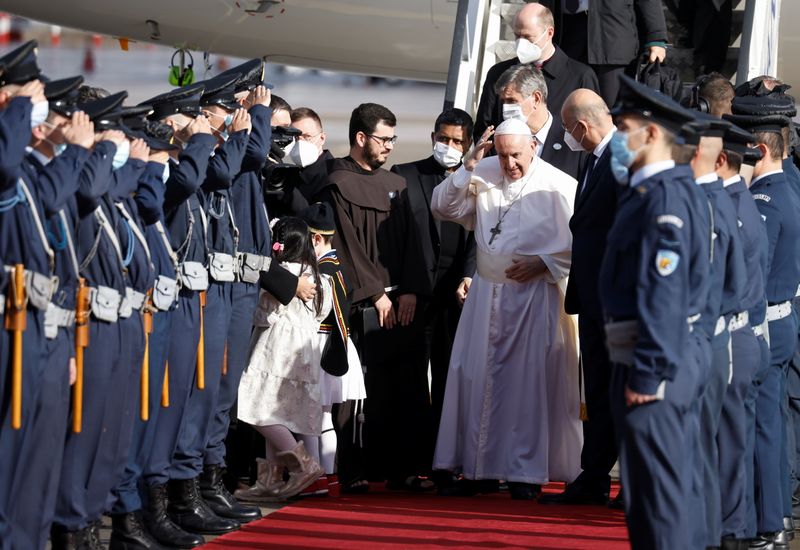 By Philip Pullella and Karolina Tagaris

ATHENS (Reuters) -Pope Francis appealed on Saturday for a return to “good politics”, saying democracy has deteriorated dangerously as discontented people are lured by the “siren songs” of populist politicians who promise easy but unrealistic solutions.

The pope arrived from Cyprus in Athens, often seen as the birthplace of democracy, on the second and last leg of a Mediterranean trip whose main aim is to draw attention to the plight of migrants and refugees.

In a speech at the presidential palace, Francis quoted ancient Greek philosophers and writers such as Aristotle and Homer. He urged a return to politics that favour the common good and are not steeped in instilling fear.

“We cannot avoid noting with concern how today, and not only in Europe, we are witnessing a retreat from democracy,” Francis said.

Francis did not name any country in his speech but in the past he has criticised the policies of a number of politicians, including former U.S. President Donald Trump and Italian far-right leader Matteo Salvini, particularly on the issue of immigration.

Francis said people should beware of politicians with “an obsessive quest for popularity, in a thirst for visibility, in a flurry of unrealistic promises…”

The pope added that he hoped that strengthened democracy everywhere “may be the response to the siren songs of authoritarianism; and that individualism and indifference may be overcome by concern for others, for the poor and for creation”.

Greece is one of the main entry points into the European Union for asylum-seekers fleeing war and poverty-stricken homelands in the Middle East, Asia and Africa.

In his address at the presidential palace he compared the plight of today’s migrants and refugees, many of whom have died at sea, as a “horrendous modern Odyssey”.

Young children in traditional Greek dress, a well as a boy from Africa and a girl from the Philippines, greeted Francis as he stepped off the plane and rode into the city in a simple Fiat 500. Since the start of his papacy in 2013, the Argentine pontiff has shunned large cars or bulletproof vehicles.

Francis will travel to the island of Lesbos https://www.reuters.com/world/popes-visit-greeces-lesbos-lays-bare-divisions-over-migrants-2021-12-01 for the second time on Sunday to visit a migrant reception center set up after the notorious Moria camp burned to the ground last year.

During a previous visit to the island in 2016, Francis walked through Moria, a camp decried by rights groups for its squalid and overcrowded conditions, and asylum-seekers fell to his feet, wept and begged for help.

He memorably took three Syrian refugee families with him on the plane back to Rome. The pope arranged to have 50 migrants from Cyprus relocated to Italy after his trip this week.

At an emotional meeting https://www.reuters.com/world/europe/pope-calls-healing-split-cyprus-orthodox-archbishop-attacks-turkey-2021-12-03 with asylum-seekers in Cyprus on Friday, Francis, citing conditions in Libya and elsewhere, said he had a responsibility to tell the truth about the suffering of refugees, many held in conditions he compared to those in Nazi and Soviet camps.