A blimp is a balloon that has no internal structure so obtains its shape solely from the pressure of the gas inside the balloon, or ‘envelope’. A rigid airship, meanwhile, like original Zeppelins, is a structure with a skin drawn tight around the frame, typically unpressurised and with gas bags inside it.

Today’s Zeppelin is a hybrid of the two. The outer envelope, made from the same sort of material as an inflatable mattress or a bouncy castle, is pressurised so gets its bulbous shape from internal helium pressure. But inside it, there’s also a framework of lightweight aluminium longitudinal sections, triangulated crosswise with carbonfibre struts. The mechanicals bolt to these rather than hanging loose from the skin or passenger compartment (gondola).

In all, the N07-101 is 75 metres long and the total mass of its hardware is 7500kg. That’s handy, because one cubic metre of helium can lift 1kg and the envelope is filled with about 7500cu.m of the stuff, so you’re looking at an aircraft that’s almost lighter than air. Almost, but not quite. 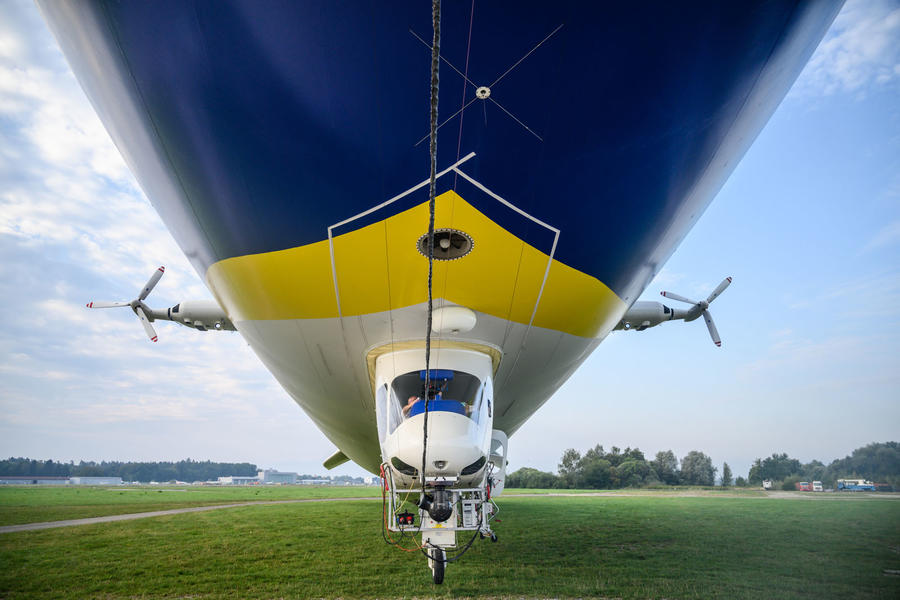 Although this Zeppelin could be lighter than air, typically it isn’t. Instead, it’s ballasted to a weight of around 300-400kg. Like a shark, then, which sinks if it stops swimming, the Zeppelin has negative buoyancy. Helium accounts for 95-97% of its lift, with the rest, in cruising flight, coming from aerodynamics, either across the control surfaces or by pitching its nose upwards by anything from as little as 1deg to as much as 8deg if it’s heavily laden.

Inside the big helium envelope are also two air-filled bags (ballonets), one at the front, one towards the rear. They serve two purposes. By inflating them to different volumes, the pilot can shift helium back and forth within the envelope, adjusting the pitch of the airship; inflating the rear ballonet, for example, forces helium forwards and points the nose upwards.