A family trying to enjoy a spring camping barbecue on an idyllic Australian island got more than they bargained for when quickly surrounded by dozens of giant robber crabs.

The ferocious looking crustaceans, also known as coconut crabs, measure up to a metre in length and have a strong sense of smell.

As the unwitting family enjoyed an al fresco barbecue while camping on isolated Christmas Island, off Western Australia’s far north-west, the crabs swarmed around them looking for food.

The crabs are harmless despite their scary looks,  although (as their name suggests)  they are regularly known to steal items from campsites. 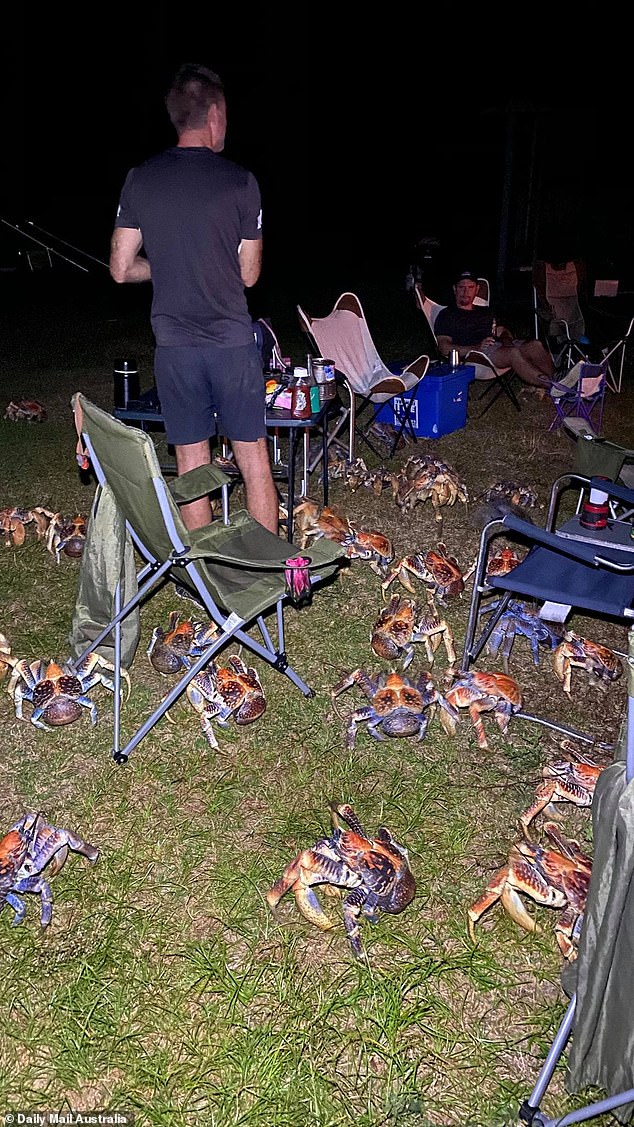 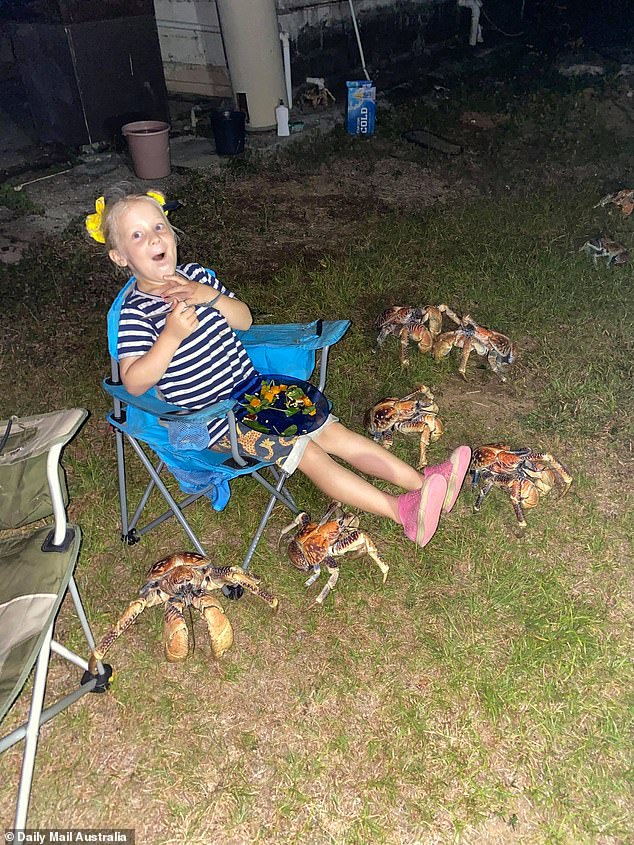 Winter McKendrick, the daughter of one of the other families on the trip, looked unfazed as the enormous crabs surrounded her as she ate her dinner in a fold-up chair 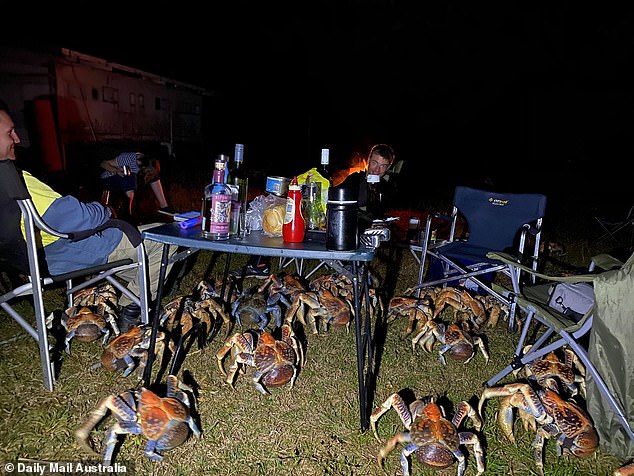 A series of amazing photos of the barbecue show more than 52 of the clawsome creatures eagerly awaiting a chance to snack on some leftovers.

Winter McKendrick, the daughter of one of the other families on the trip, looked unfazed as the enormous crabs surrounded her as she ate her dinner on her fold-up camping chair.

One brave crab was pictured scaling the side of the table to get better access to the family’s meal.

Amy Luetich and her family have lived on Christmas Island for a few years and were camping with some other families in Grants Well, which is in the jungle part of the island.

READ  Who is Roman Polanski, when was his wife Sharon Tate murdered, why is he wanted by the US and what are the assault allegations?

‘We have camped in that area a few times and we have never seen so many robber grabs,’ Mrs Luetich told Daily Mail Australia.

She said when they arrived there were 20 under a tree, which had started to seed.

‘But as soon as we started cooking, they swarmed around us. My son counted 52 of them,’ the deputy principal said. 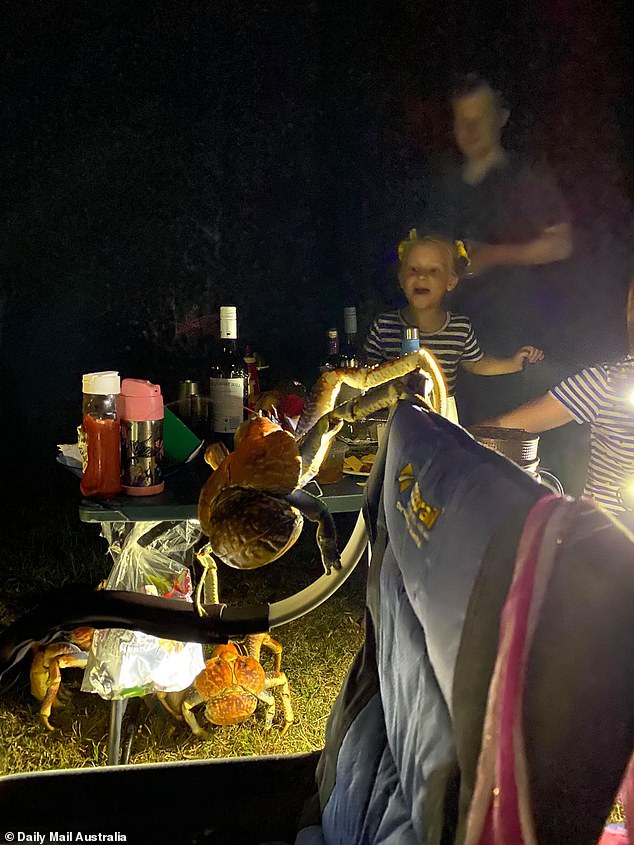 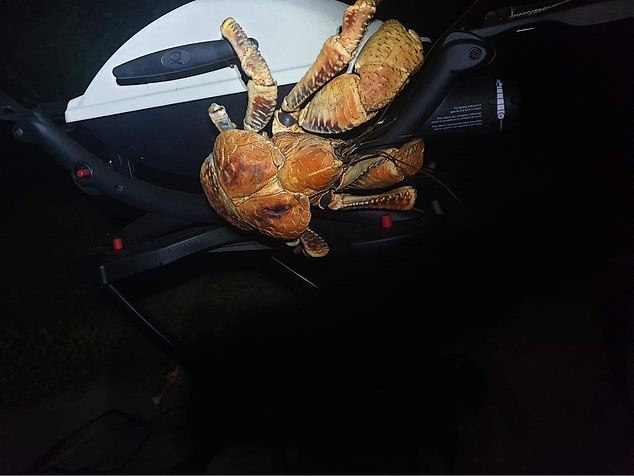 ‘His job was to pick them up and move them away from where we were eating. He was loving it.

She said because they had lived on Christmas Island for a while they were used to seeing the robber crabs.

‘Then they started to climb up to the table, and another climbed onto the barbecue,’ Mrs Luetich said.

‘We kept our tents away from where we had eaten, but one of the families said the whole night they could feel one tapping on the outside of their tent.’ 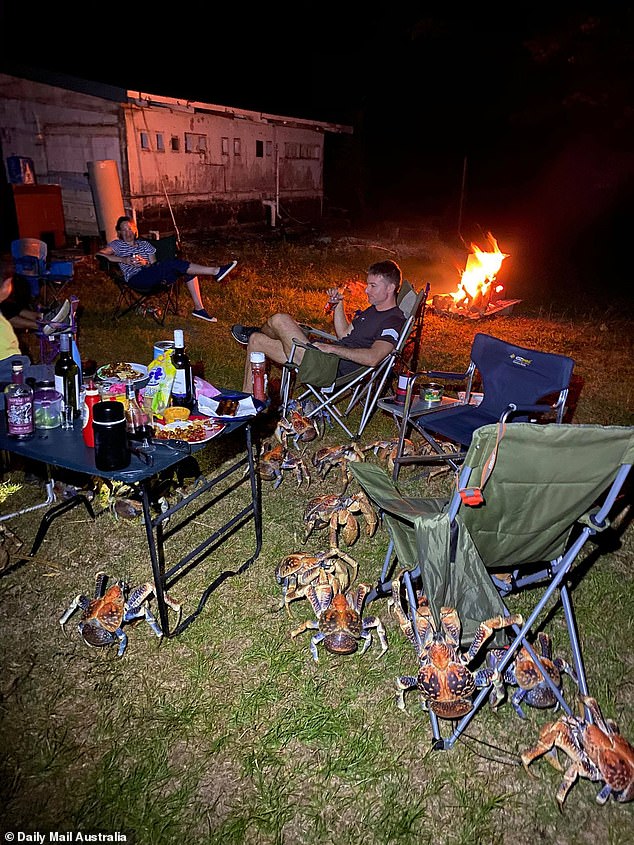 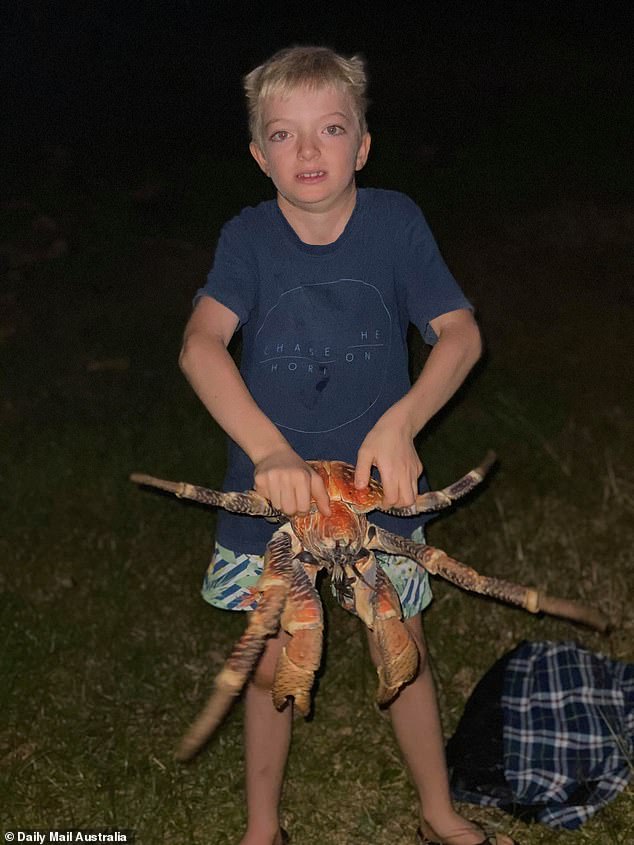 WHAT ARE ROBBER CRABS

Robber crabs are the largest land crustacean in the world and many call Christmas Island home.

They can weigh up to four kilograms and measure a metre wide.

The robber crabs are good eating considered a delicacy with aphrodisiac qualities across the Pacific, but they are a protected species in Australia and can’t be eaten.

READ  Firefighters and police battle on the streets of Paris

Robber crabs forage floor for things such as seeds and fruits.

Larger robber crabs have been known to eat smaller ones.

Coconut crabs are exceptional climbers and move fast when it comes to food.

It’s name comes from its tendency to take foreign objects and run off with them.

Robber crabs are closely related to hermit crabs and use seashells or coconuts for protection until they develop a hard abdomen.

Drivers on Christmas Island are asked to ‘slow down and drive around’ the animals as if their hit by a car they could be killed.

The images were shared to a Christmas Island tourism Facebook page.

‘Robber crabs behaving badly! A couple of local Christmas Island families had a few extra mouths to feed at their BBQ over the weekend,’ the caption read.

‘Coconut crabs have an incredible sense of smell and for slow moving creatures they sure move quickly when there’s food around.’

Followers of the page were quick to comment on the post, with many recounting their own experiences.

‘Lost a sneaker to these buggers one night. Couldn’t find a one-legged robber crab,’ one person joked.

Another said: ‘They are like puppies. We hung out on Dolly Beach feeding them coconuts. So cute!’

Others weren’t so thrilled with the possibility of being in the family’s shoes.

‘This makes me feel uncomfortable,’ one person said.

Christmas Island has the largest population of robber crabs in the world.

The robber crabs are good to eat, tasting like a cross between a mud crab and a lobster. But while they are considered a delicacy with aphrodisiac qualities across the Pacific, they are a protected species in Australia and can’t be eaten.

Visitors are warned that while the crustaceans are docile, they can move quickly when they sense food.

Tourists are told to hang their food in a tree and keep an eye on it at all times – particularly on Dolly Beach.

Drivers in the area are also asked to drive slowly so as not to run over the crabs.

Australians who live in WA are able to visit Christmas Island despite travel bans across the country.

Tourists are warned that robber crabs are ‘protected and respected’ on the island. 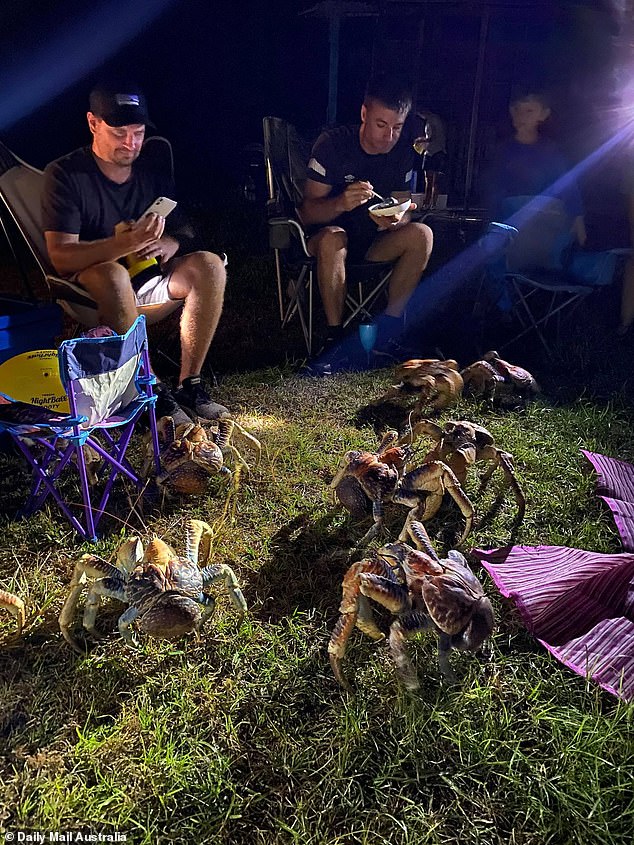 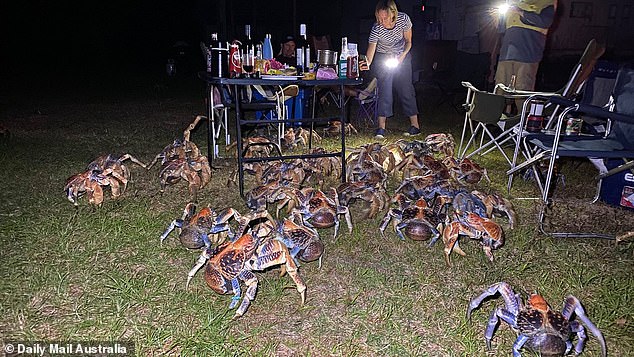 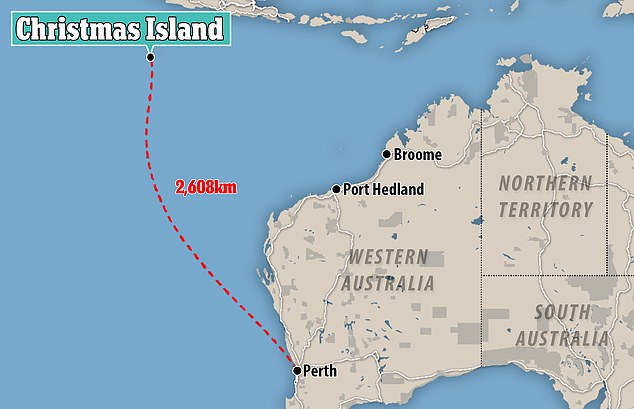 Christmas Island had its ownership transferred from Singapore to Australia in October 1958.

The island has been used as an off-shore detention centre since 2016, and was closed for a brief period.

The Sri Lankan Biloela family are housed in the facility,

However, Christmas Island is also known for its stunning wildlife.

The island is home to 25 million red crabs, which stay on land until they move to the ocean to breed and then the infants return to land.

Whale sharks are also a feature of the island during this time of year.

Attempted hijacking of oil tanker reported off Isle of Wight