Chris Evans has spoken out over the disturbing incident that saw much-loved Honey, I Shrunk the Kids star Rick Moranis get punched in the head by a complete stranger in New York City.

The Captain America star lead the angry responses on social media from fans of the actor on Friday, after he tweeted: ‘My blood is boiling. Find this man. You don’t touch Rick Moranis.’

Moranis, 67, was subjected to the unprovoked attack on Thursday when an unidentified man struck him in the head, knocking the actor to the ground, however, his rep says he is now doing ‘fine.’ 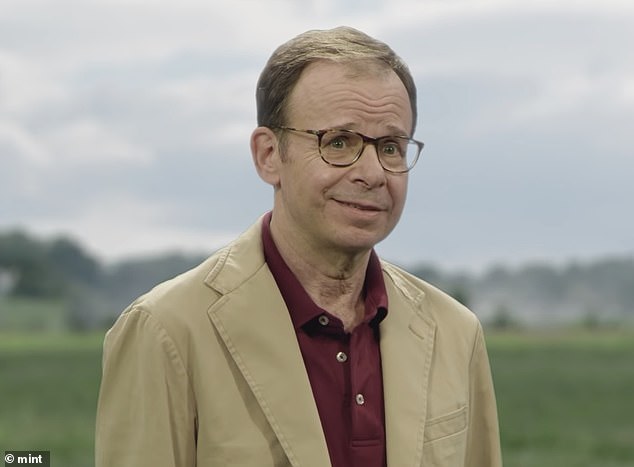 Shock: Much-loved actor Rick Moranis, 67, was subjected to the unprovoked attack on Thursday when an unidentified man struck him in the head, knocking the actor to the ground 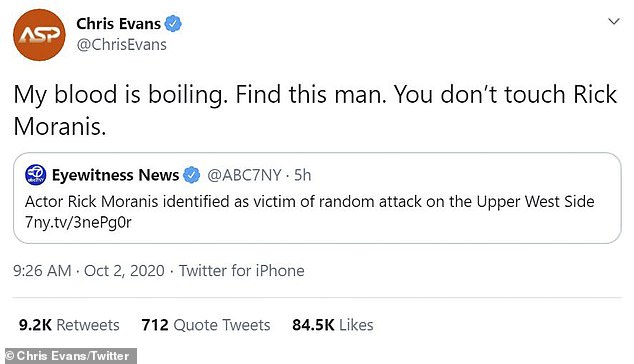 Hitting out: Chris Evans angrily reacted to the news on Friday, leading a charge of supportive messages for the actor

Evans, 39, was just one of many voices on Twitter that came out to support the beloved Ghostbusters comedian, who quit acting in 1991 to look after his two daughters when his wife died of breast cancer.

A representative for Moranis told outlets on Friday that he is ‘fine but grateful for everyone’s thoughts and well wishes.’

After the attack, Moranis visited a local hospital, where he reported pain in his head, back and right hip. However, the extent of his injuries are unknown. The actor then reported the incident to cops at the 20th Precinct. 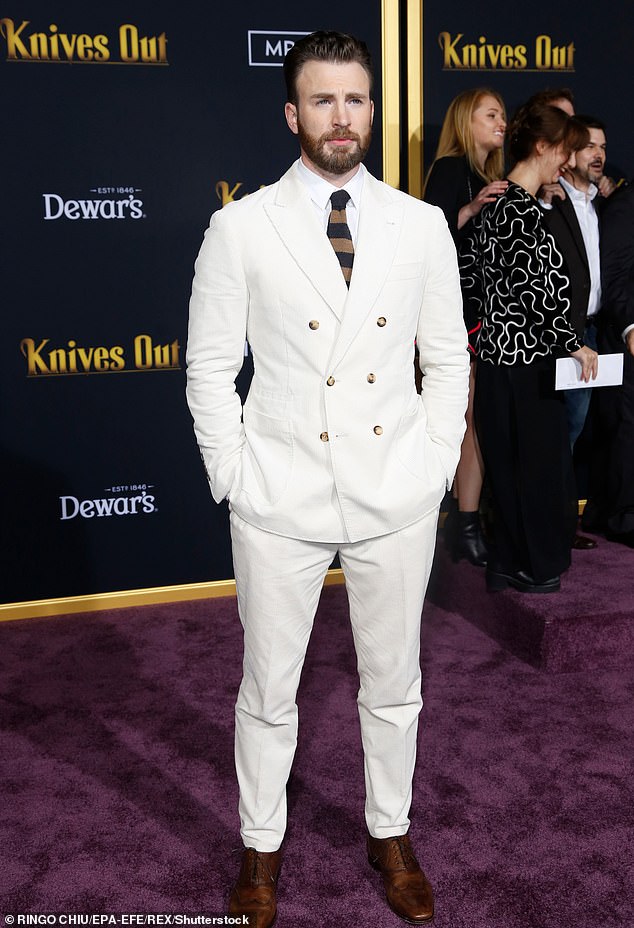 Not having it: Captain America star Chris was less than pleased when he found out about the news 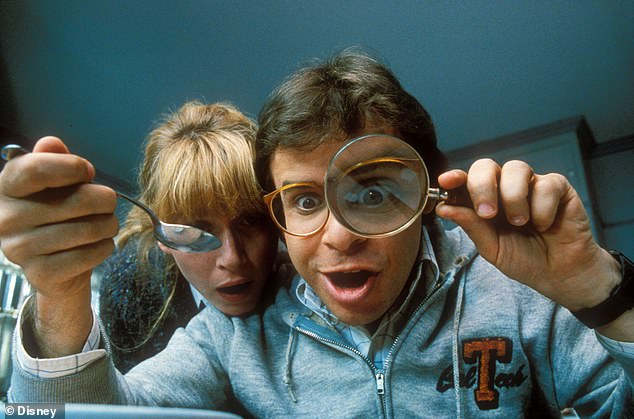 Iconic: The actor is clearly still loved by many fans and fondly remembered for his role in the 1989 kids film Honey, I Shrunk the Kids 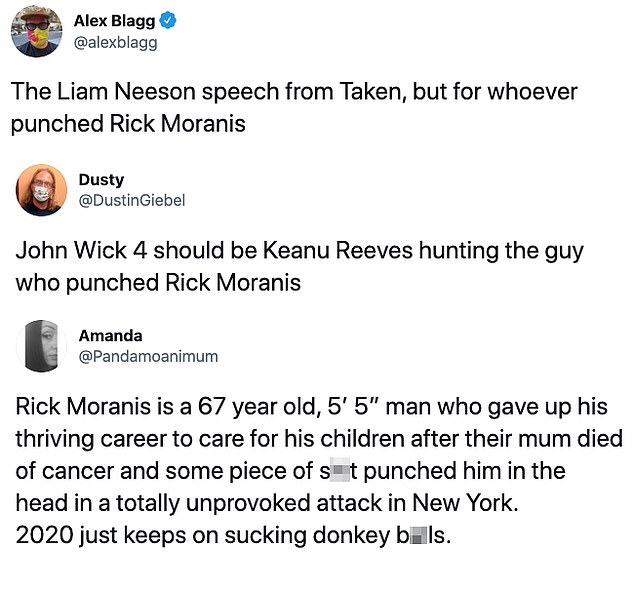 The suspect, who was seen wearing a dark ‘I [love] NY’ sweatshirt, black pants and sneakers, fled the scene on foot and had not yet been apprehended.

On Twitter, the NYPD said it is offering a reward of up to $2,500 for the attacker’s apprehension. Anyone with information about the incident is asked to call the Crime Stoppers hotline at 1-800-577-TIPS. 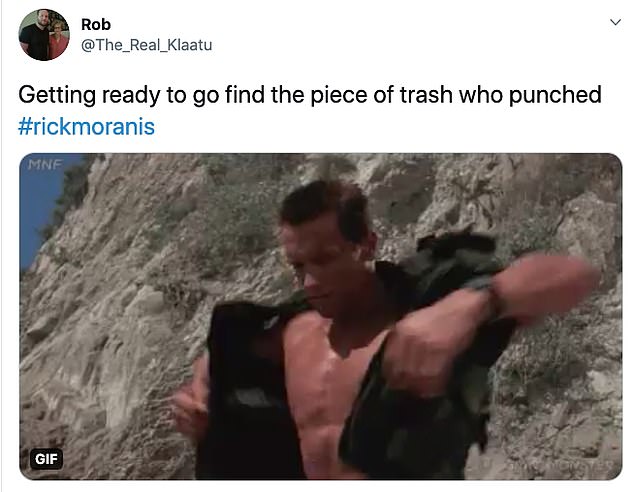 Support: Fans were very spirited in feeling protective of the much-loved star 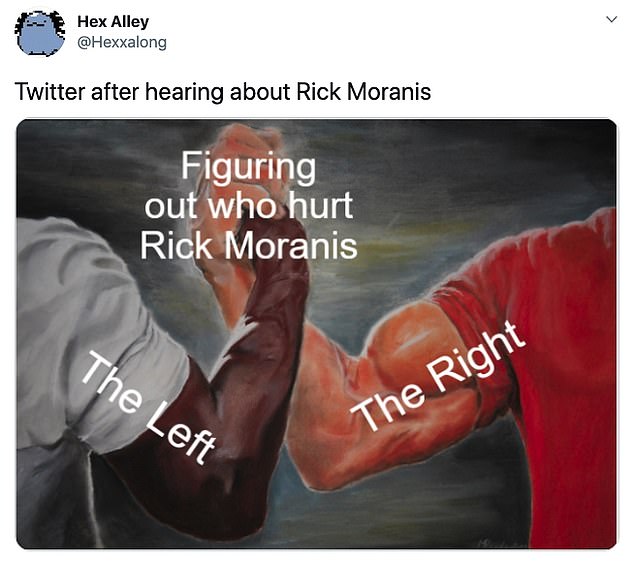 Uniting people: Other memes suggested now matter which political side you’re on, everyone could agree this was not OK 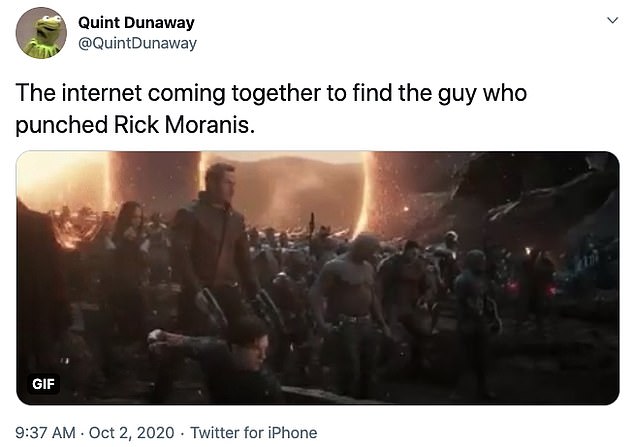 Thankful: The actor said that he was grateful for all the well wishes

One user fumed: ‘Rick Moranis is a 67 year old, 5′ 5″ man who gave up his thriving career to care for his children after their mum died of cancer and some piece of s*** punched him in the head in a totally unprovoked attack in New York.’

Other users made memes about the Internet uniting to find the man who did it, showing what a huge fan base the actor has.

Moranis, who was born in Toronto, Canada, secured his big break when he appeared in the 1983 film Strange Brew. 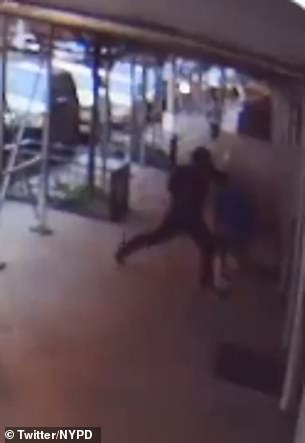 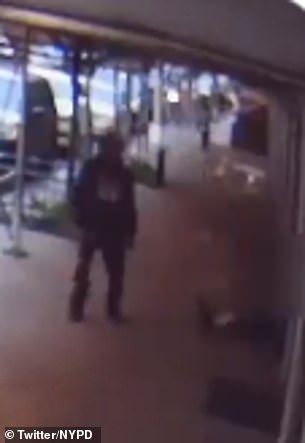 Rick Moranis, 67, was walking on New York City’s Upper West Side on Thursday around 7.30am when he was attacked. Surveillance footage captures a stranger walking past him abruptly punching Moranis in the head, knocking him to the ground (left and right) 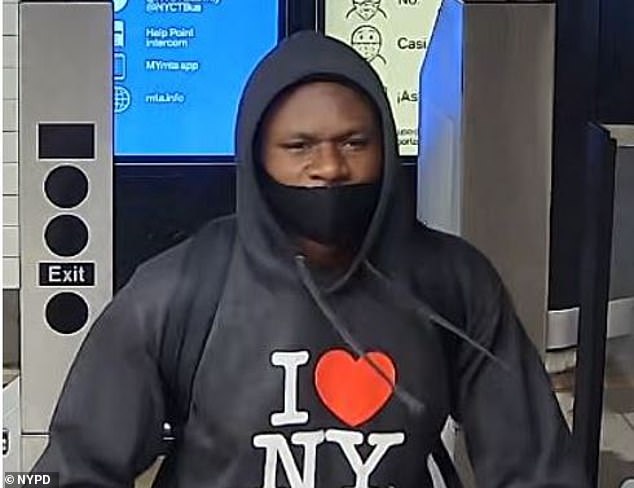 NYPD is offering a $2,500 award for any information that leads to the arrest of the suspect (pictured), who fled the scene on foot

He then appeared in a string of commercially successful films including Ghostbusters in 1984, Spaceballs in 1987, and two films in 1989, Ghostbusters II and Honey, I Shrunk the Kids.

The original Honey, I Shrunk the Kids was so successful that Moranis returned for sequel Honey, I Blew Up The Kid in 1992.

He completed the trilogy with straight-to-video sequel Honey, We Shrunk Ourselves in 1997 which was his last on-camera role before his hiatus.

Moranis has largely remained out of the spotlight since, only doing voicework for a few animated projects including the 2003 film Brother Bear and TV series The Animated Adventures Of Bob & Doug McKenzie.

Prince Azim of Brunei Dead at 38