China‘s first coronavirus hospital has opened in a city near Wuhan after workers and volunteers spent just two days converting an empty building to a 1,000-bed emergency facility.

The first batch of coronavirus patients were transferred to the Dabie Mountain Regional Medical Centre in Huanggang at around 10:30pm local time Tuesday.

The project was complete within 48 hours thanks to the joint effort of staff from construction firms, utility companies and paramilitary police officers, the city’s authority said. 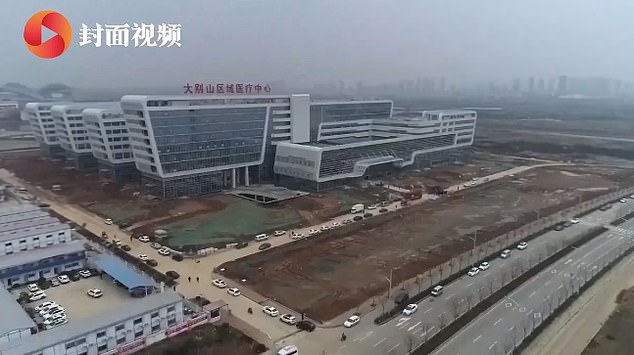 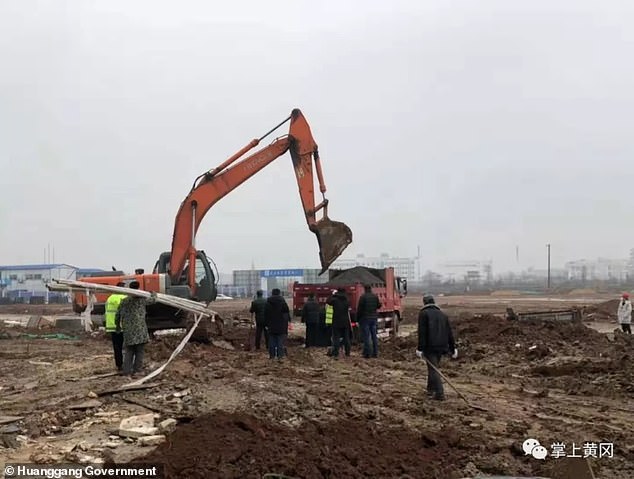 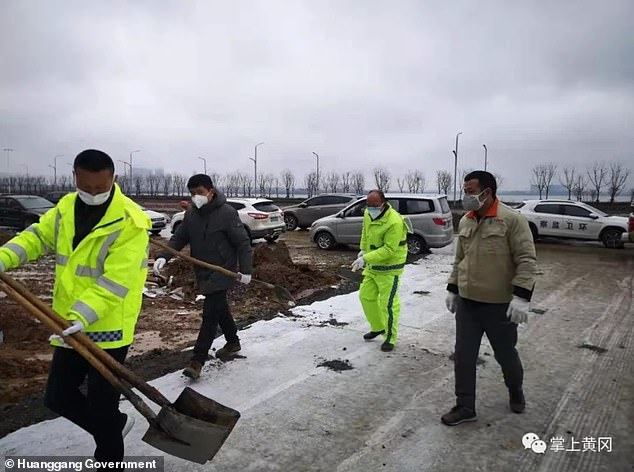 The project was complete within 48 hours thanks to the joint effort of staff from construction firms, utility companies and paramilitary police officers, the authority of Huanggang said 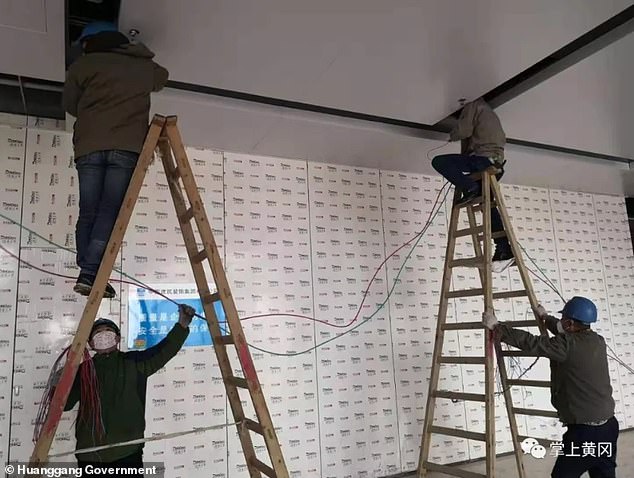 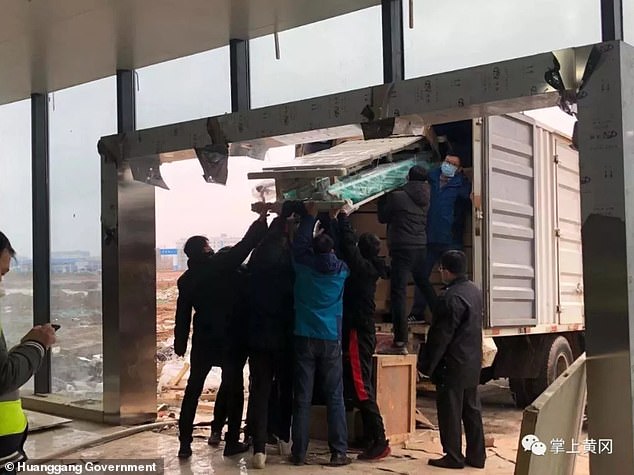 By Monday, all of the beds had been set up by volunteers, and water, electricity and internet had also been connected, according to the government of Huanggang

The hospital building in the city’s Huangzhou District was originally built as a new branch of Huanggang Central Hospital and expected to open in May.

On Friday, the local authority ordered the building, which was complete but empty, to be used for treating coronavirus patients only.

By Monday, all of the beds had been set up by volunteers, and water, electricity and internet had also been installed, according to the government of Huanggang.

Footage released by China’s Cover News shows medical workers familiarising themselves with the facility today before the patients started to arrive. 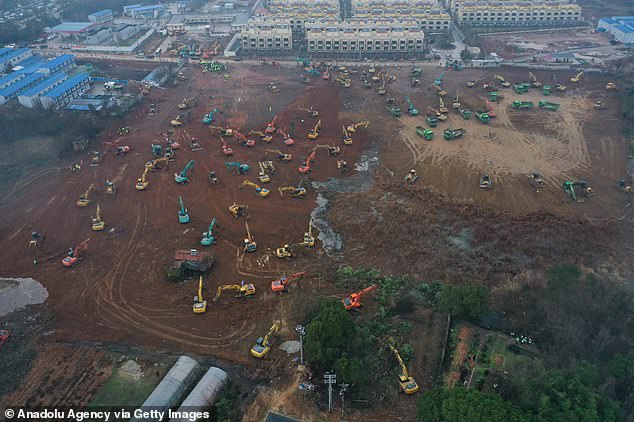 All of the coronavirus hospitals are modelled on a temporary medical centre, which was built in Beijing in seven days to tackle SARS in 2003 and treated one-seventh of the country’s SARS patient in the space of two months. In the picture above, dozens of diggers work to build the six-acre coronavirus hospital in the Caidian District in the western suburb of Wuhan, China 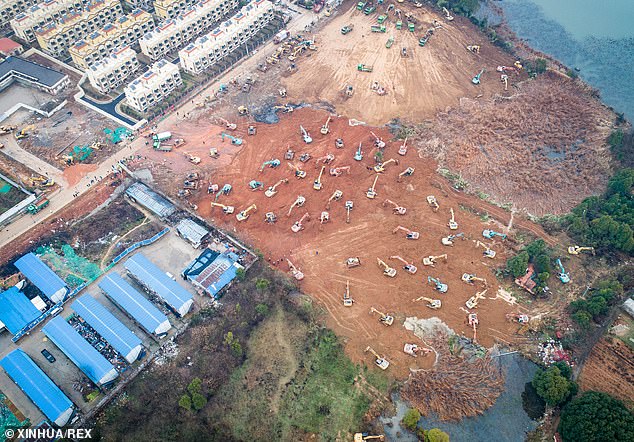 Wuhan, which is ravaged by a deadly new virus, has vowed to build a special, 1,000-bed hospital in less than a week to fight an outbreak that has left at least 130 people dead in the country. In the picture above, mechanical equipment are seen working on the construction site of the coronavirus hospital in the Caidian District in Wuhan, China, on January 24

More than 500 workers and a dozen heavy vehicles worked two days and nights in order to complete the task on time.

Situated 75 kilometres (46.6 miles) south-west of Wuhan, Huanggang has a population of around 7.5 million and is one of the cities that have been hit by the coronavirus the hardest.

It went into lockdown last Thursday, the same day as Wuhan. 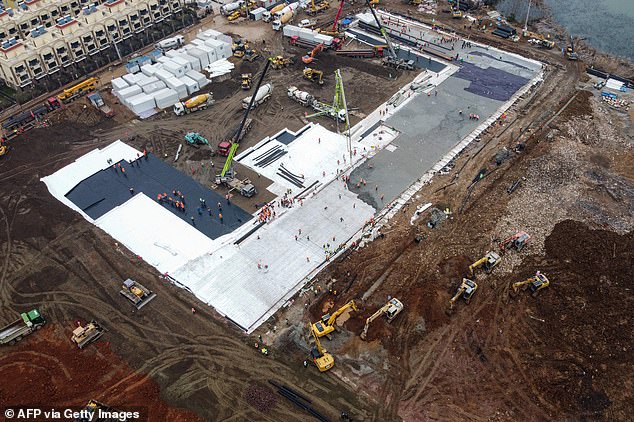 The Wuhan authorities have instructed four construction companies to toil through the Chinese New Year holiday in order to complete the urgent task. This photo shows excavators and trucks on the construction site of a new hospital on January 27

The coronavirus has killed at least 131 people – all in China – and sickened nearly 6,000 worldwide.

As of yesterday, four people from Huanggang have been killed by the deadly virus and 213 people have been infected.

The government of Wuhan announced last Thursday that they would build a coronavirus hospital in a week.

There are at least four of such facilities completed or being completed in the country.

All of them are modelled on a temporary medical centre in Beijing in 2003, which was built in seven days to tackle SARS and treated one-seventh of the country’s SARS patient in the space of two months.

The authority of Wuhan is building two special facilities to treat a total of 2,300 coronavirus patients. 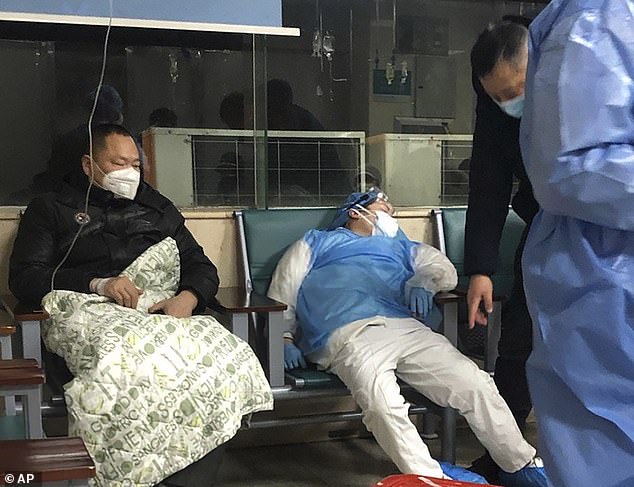 The coronavirus epidemic has killed at least 131 people – all in China – and sickened nearly 6,000 worldwide as of today. In the picture above, a medical worker (right) rests in a chair next to a patient at a hospital in Wuhan in central China’s Hubei Province on January 23 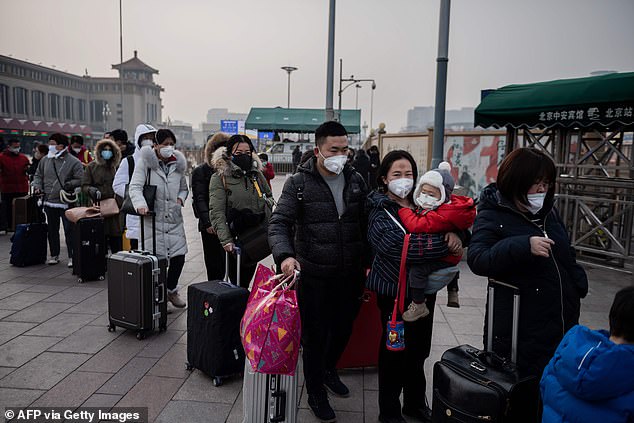 The intensifying health crisis has led the authorities to quarantine at least 56 million people living in central China’s Hubei Province. In the picture above, people wearing face masks to avoid the disease queue to take a taxi at the Beijing railway station on January 27 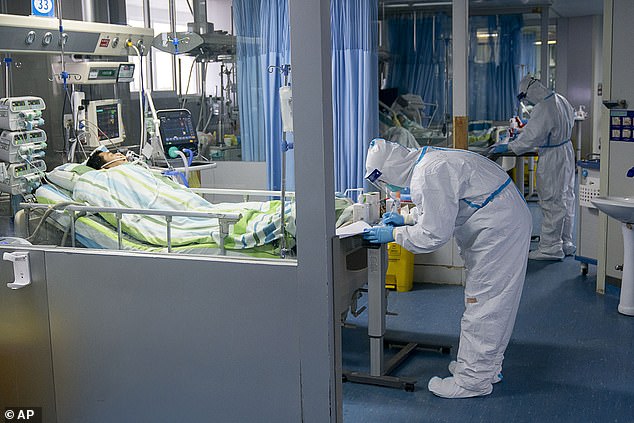 China’s central government has sent around 6,000 doctors to Wuhan from across the nation to help the city deal with the outbreak. In the picture above, a medical worker attends to a patient in the intensive care unit at Zhongnan Hospital of Wuhan University in Wuhan on January 24

The emergency facility is situated in the western suburbs of Wuhan, the epicentre of an outbreak of the novel coronavirus.

The authorities have instructed four construction companies to toil through the Chinese New Year holiday in order to complete the six-acre, 1,000-bed medical centre in Caidian District in a week. It is expected to receive its first patients on February 3, according to state media.

The second hospital in Wuhan, named the Leishanshan or Thunder God Mountain Hospital, is situated in Jiangxia District, a suburban area to the south of the city centre.

Construction started on Saturday and the hospital is set to have two buildings containing a total of 1,500 beds, according to Xinhua News Agency. Around 2,000 medical workers are expected to treat patients in the special 7.4-acre centre, it is reported.

Another hospital is being built in Zhenzhou in central China’s Henan Province.

A German man infected with the Wuhan coronavirus has become the first person in Europe to catch the virus without even going to China.

The 33-year-old caught the disease in his home country on January 21 from a colleague who was visiting from China and later became ill on her flight home. She was from Shanghai but had recently visited her parents in Wuhan.

Fears of the deadly coronavirus, which has now infected nearly 6,000 people, spreading around the world are growing as the German man’s case is one of four – men in Vietnam, Japan and Taiwan have also been infected at home.

Countries around the world are starting to cut ties with China and pull their citizens out of the crisis-hit Hubei region, where the virus emerged in the city of Wuhan.

Hong Kong’s leader today held a press conference during which she wore a face mask and said the city would stop all high-speed trains and ferries to the mainland, halve the number of flights and stop giving visas to visitors from China.

Four cases around the world have confirmed the coronavirus is spreading from person to person outside of China among people who have not visited the country.

A Japanese bus driver in his 60s, working in the city of Nara, was infected after driving for two groups of people visiting from Wuhan, and a Vietnamese man caught the virus from his father who had recently returned from a visit to China.

In Australia, paramedics in hazmat suits were today seen at the luxury Peppers Broadbeach hotel on the Gold Coast and stoked coronavirus fears when they ushered a masked patient into an ambulance.

And a health minister in Thailand today admitted that the country is ‘not able to stop’ the spread of the virus there, where 14 people have been infected – the most in any place outside of China.

But China is maintaining a solid front – President Xi Jinping today said the nation would ‘win the battle against the devil virus’ and a Chinese scientist said he thinks the outbreak and the ‘battle of Wuhan’ will peak in 10 days’ time.

Wuhan remains in lockdown and one British man living there said he and his wife and nine-month-old daughter are too afraid to leave their home so are living off leftover food from a New Year dinner.

Bellwether caucuses: diverse Nevada is a crucial test for Democrats

Australia bushfires: Backpackers can stay longer if they help rebuild

Boy, 3, found dead on school bus by horrified driver amid fears he’d been left alone on board ALL DAY