All of the UK’s children’s laureates, including Cressida Cowell, Quentin Blake, Philip Pullman and Michael Rosen, are uniting to call for the government to dedicate £100m a year to revitalising “deteriorating” primary school libraries across the country, amid fears that literacy levels have dropped severely during the pandemic.

In an impassioned letter to prime minister Boris Johnson, Cowell, the current laureate, calls for £100m to be ringfenced for building new and restoring neglected libraries every year, saying that millions of children are “missing out on opportunities to discover the life-changing magic of reading”.

Decades of research has linked childhood reading to future success, including a 2002 OECD study that found it was a more telling predictor than a family’s socio-economic status. At the same time, both public and school libraries have been subject to swingeing cuts over the last decade. Johnson is reportedly set to unveil a “four-year emergency” plan for literacy next month, with the Sunday Times reporting that unpublished government figures have revealed that more than 200,000 pupils are set to enter secondary school this autumn without being able to read properly – a rise of 30,000 since last year.

The £100m in funding would allow schools to establish entirely new libraries, hire professional librarians and buy new stock; by comparison, £320m has been ringfenced to promote physical education in primary schools this year, with hundreds of millions set aside every year since 2013.

“Surely the opportunity to become a reader for pleasure is just as important [as PE]?” reads the letter, also signed by former laureates Julia Donaldson, Jacqueline Wilson, Michael Morpurgo and Malorie Blackman, and by the heads of several literacy and publishing organisations. “How is it fair that some children are being given this immeasurable advantage in life, but stark book poverty means many more are denied this same chance to change their future?”

“I have visited primary schools across the country over my 20-year career as a children’s author/illustrator and it is heartbreaking to see just how unevenly this fundamental opportunity is distributed,” Cowell writes. “So often the children who need books the most are in schools that cannot provide them with even an adequate school library, let alone a good one.”

While libraries are a statutory requirement in prisons, this is not the case in schools. Several laureates have campaigned for improvements over the last two decades, including Chris Riddell, who called for an investigation into school library closures in 2017. In 2014, the All-Party Parliamentary Group on Libraries recommended that the Department for Education gather exact numbers so the “extent of this problem can be understood”, but no investigation ever happened. This means that the state of school libraries is harder to pin down.

The Great School Libraries survey of more than 1,700 schools revealed that one in eight had no library at all. Nine in 10 English schools had libraries, compared to 67% in Wales and 57% in Northern Ireland. It also found that 39% of primary school libraries held fewer than 5,000 books, and were only staffed for one hour a day on average, compared with seven among secondaries. Social deprivation was also a key indicator: schools with a higher proportion of children on free school meals were more than twice as likely not to have access to a designated library space.

Despite years of laureates campaigning for improvements, Cowell told the Guardian, “this message isn’t getting through to government or the general public. I do not know why.”

“The impact of Covid-19 on literacy will be a major challenge, but hopefully it will focus everyone’s minds on what we need to do,” she said. “Even before the pandemic, children were starting months behind where they should be. It is a major problem. And as a practical person, I am suggesting a practical solution. We ringfence money for sport, why not literacy?”

Each will receive 1,000 books donated by publishers, training for staff in librarianship, new furniture and audiobook technology, and wall art to make the spaces feel more appealing to children – “like a sweetshop”, said Cowell, “rather than tired and boring”.

The libraries will reopen in June, and the impact on students will be monitored over 12 months.

Kate Chisholm, headteacher at Skerne Park primary, said the school was thrilled to take part, and that the library’s current stock was “old and well-used, and not very enticing for children”.

“I wish I could do this for every school in the UK,” said Cowell. “But I think it is so exciting to have a chance to show how transformative a good school library can be.” 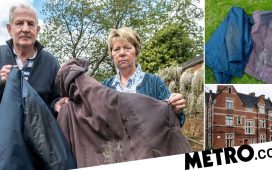