Children who organised a protest at Pimlico academy, the London secondary school at the centre of demonstrations over allegations of racial discrimination, could be facing permanent exclusion after being told to attend a disciplinary meeting on the first day of term.

Hundreds of students took part in a demonstration outside the school last month, in protest over changes to the curriculum, uniform policy and the siting of a union flag outside the academy building.

In an email before pupils’ return to school on Monday after the Easter holidays, the headteacher, Daniel Smith, told some parents that they would need to attend a disciplinary meeting with their child on Monday 19 April.

The email explained that following the meeting with Paul Smith, the chief executive officer of Future Academies, the trust which runs Pimlico academy, and the assistant principal, Lauren Reid, a decision would be made as to which disciplinary sanctions, if any, the child would face.

“You should be aware that if [child’s name] is found to have committed a serious breach of the academy’s behaviour policy and if it is deemed that [child’s name] remaining in school would seriously harm the education or welfare of others, consideration will be given to permanently excluding [child’s name] from the academy,” it said.

However, the email, sent to the parents of the students on Friday afternoon, continued that the meeting would be approached from a “reconciliatory perspective” and it was hoped permanent exclusion would be avoided.

This week Lord Nash, the chair of Future Academies, wrote a letter to parents warning that any future disobedience by pupils would result in disciplinary action.

The Guardian has previously reported that the school has come under intense scrutiny in recent months with staff resignations and a vote of no confidence in its headteacher.

In September 2020 students took down and burned a union flag that had been erected outside their school. Four weeks earlier, pupils had started a petition in response to the academy’s strict new uniform policy, which stated that hairstyles that “block the views of others” would not be permitted and hijabs should not be “too colourful”. The pupils accused the school’s management of racism, claiming that the new policy would penalise Muslims and those with afro hairstyles.

Future Academies has been contacted for a statement.

Campus free speech law in England ‘likely to have opposite effect’

From the archives: Why I’m suing over my dream internship – podcast 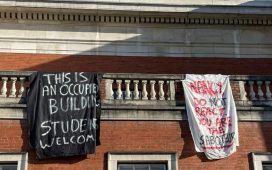