Sam Kerr’s double took Chelsea back to the top of the Women’s Super League in a patient victory over lowly Aston Villa at Kingsmeadow.

Kerr and Fran Kirby, the scourge of so many defences all season, combined for the opening goal, the Aussie directing a fine looping header in off the post.

And Kirby’s pace helped create havoc for the second after the break, with Kerr curling in a delightful strike.

Chelsea go top by two points from Manchester City, who edged past Reading on Saturday thanks to Chloe Kelly’s 87th-minute strike.

The Blues, who are still to meet City in one of their remaining four games, were not at their best but did not need to be against a Villa side whose only attempt on goal was a tame long-range effort from Chloe Arthur.

Chelsea, on the back of their midweek Champions League first-leg win over Wolfsburg and with the second leg in mind, made six changes but, tellingly, the lethal combination of Kerry and Kirby remained intact.

Ji So-Yun shone in midfield, dictating play throughout, but it was Kerr and Kirby who did the damage with the double act linking up for the ninth and 10th goals of the season.

Kerr could have had a hat-trick when through on goal only to send a tired shot just wide before being replaced soon after the hour.

Chelsea were disjointed in the closing stages as boss Emma Hayes looked to rotate her squad with the game as good as won, but the hosts did not need the security of a third goal.

Chelsea boss Emma Hayes on Kerr-Kirby partnership: “Everybody knows the pressure that both of those players were under from the start of the year.

“The fact that they are going into every game looking like they’re going to score, I think that’s testament to their ability to handle that pressure.

“Both of them are in the form of their lives and that combination is dynamite, it’s telepathic. It’s rare in football to find those things. I know that they are going to get chances in every game and it’s about capitalising on those chances.”

Aston Villa manager Marcus Bignot: “We have come away with our confidence intact and our belief growing.

“Performances like today will help us build that belief going forward.” 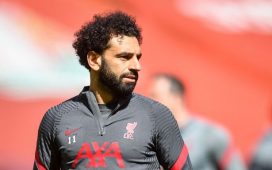