In his first job in a pub kitchen as a teenager, someone handed Gareth Ward a copy of The Good Food Guide. “I knew nothing about food or restaurants, but I read it cover to cover like it was a fairystory. It blew me away. It was a world I didn’t even know existed,” he said.

Ward, now the chef-proprietor of Ynishir on the mid-Wales coast, decided he wanted to be No 1 in the guide’s top 50. Last year, Ynishir was No 4. “I was so close, and now it will never happen.”

Last week saw the demise of The Good Food Guide, the gourmet’s bible, after 70 years of reviews by clandestine inspectors. Waitrose, the guide’s owners since 2013, quietly announced that, regrettably, it would not be published this year and there were “no plans to publish future guides”.

The supermarket chain would retain the brand, and “continue to champion the industry”, a statement said.

Elizabeth Carter, the guide’s consultant editor for the past 14 years, said it was “hard to come to terms with this end of an era”.

She told the Observer: “The guide’s 70-year legacy will always be unrivalled. I’m proud to have continued the legacy of championing independent restaurants, pubs and cafes across the UK. Over the years the unique reach of the guide has been acknowledged by chefs and proprietors for putting bums on seats.”

The Good Food Guide was created in 1951 by Raymond Postgate in response to the dire state of postwar dining in Britain. Postgate, a journalist, author, first world war pacifist and socialist, founded the Society for the Prevention of Cruelty to Food – later the Good Food Club – and invited volunteers across the country to submit reports of restaurants serving decent food.

The overwhelming response to his appeal formed the basis of the first guide, which included 600 entries and sold 5,000 copies. By 2019 – the year of the last guide to be published in physical form before Covid whacked the hospitality industry – there were 1,200 entries.

“Raymond Postgate’s creation wasn’t simply a guide book. It was a campaign for a better life in postwar Britain,” said Jay Rayner, the Observer’s restaurant critic.

“For generations it has continued to be an invaluable source of vital intelligence on where the great places are, despite a massively changed restaurant landscape. My parents swore by it and I’ve used it throughout my years of restaurant reviewing.” Its end was “hugely dispiriting”, Rayner said.

One inspector said the move was akin to closing Wisden, the cricketing almanac that has been published every year since 1864. People collected The Good Food Guide, arranging volumes in year order on their bookshelves, he said.

The inspector, who asked to remain anonymous, has spent more than a dozen years travelling around the country, eating two large meals a day. “It’s been quite harsh on the digestive system and the waistline,” he said.

“And although it sounds glamorous, it can be quite lonely. All those meals eaten alone, with other people wondering who that weird bloke in the corner is, ordering so many dishes and tapping stuff into his phone.

“You can usually tell if you’ve been rumbled. Suddenly, the service dials up a few notches, or an extra unordered dish appears, or the chef begins hovering.”

The undercover part-time inspectors always pay for their meals, and are supplemented by an army of readers, who scout for new or overlooked restaurants.

Will Devlin, chef-proprietor of The Small Holding in Kilndown, Kent, said being named in the guide as a chef to watch in 2020 had “changed our lives. It was an amazing showcase for what we’ve done.”

He said he was “gutted and angry” at the news of the guide’s closure. “It’s something I use as a consumer when I go out to eat, it’s a great tool to discover new places.

“But as a chef, the guide is the biggest shout out for British cuisine. They work hard to shine a light on great independent restaurants and bang the drum for us. It has a huge amount of value in our industry – especially now when we’re on our knees.”

Simon Rogan, whose Lake District restaurant L’Enclume took the No 1 spot in 2020, said the guide “carried a lot of clout”.

“As a young chef, it was something to look out for every year. The people who taught me really respected it and aspired to do well in it. They passed that on to me. It feels quite something for us to be the last No 1.”

Many in the industry hope that a buyer may come forward. But Waitrose’s statement that it was retaining the rights to the brand was a shock, said one insider. “They seem to be saying it’s not for sale, and we’re struggling to understand that decision.”

When the guide was not published as a physical book last year because of the pandemic, there was no indication that it would never reappear. In recent months, the John Lewis Partnership, which owns Waitrose, has announced shop closures and job losses across the board as it seeks to recover from Covid and changing shopping patterns.

“We are very appreciative of the efforts of all our partners, inspectors and those who have contributed to the guide during the seven years since we acquired it,” the company’s statement said. 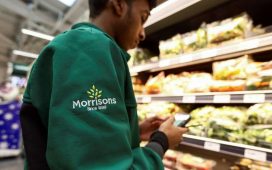