Championship roundup: Blades’ Fleck taken off on stretcher in win at Reading


The Sheffield United midfielder John Fleck was taken off on a stretcher in the second half of his side’s 1-0 win at Reading. With the Blades leading through Jayden Bogle’s 56th-minute strike, Fleck went down apparently unchallenged – and his teammates quickly indicated for the medics to run on to the pitch and tend to him.

Fleck, 30, appeared to receive emergency attention before, after a 10-minute delay, he was taken off on a stretcher and out of the ground to a waiting ambulance. United said on Twitter that Fleck was conscious when he left the stadium via the ambulance gate.

West Brom ended a run of four successive away defeats but gave up more ground in the automatic promotion race as they were held to a goalless draw at Blackpool. The Baggies keeper Sam Johnstone made a brilliant double stop to deny Gary Madine and Keshi Anderson while Matt Clarke came close to snatching a late winner for the visitors.

Chris Wilder is still waiting for his first win as Middlesbrough manager after Preston came from behind to claim a 2-1 win at the Riverside Stadium. Paddy McNair’s 33rd-minute header looked set to get Wilder’s regime up and running after he marked his debut in the dugout with Saturday’s 1-1 draw against Millwall. But Ched Evans headed Preston’s equaliser in the 77th minute and four minutes later, Emil Riis Jakobsen lashed an unlikely winner for Frankie McAvoy’s men.

Birmingham ended a run of two successive defeats by clinging on for a goalless draw at former tenants Coventry despite having Ryan Woods sent off eight minutes from time.

Nottingham Forest also ended the night with 10 men after Jack Colback was sent off for two bookable offences in their goalless draw with Luton at the City Ground. 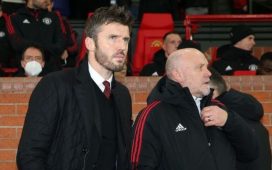