The British energy company wants to convert the site 18 miles off the Yorkshire coast to hydrogen at a cost of £2bn but, for now, natural gas could be reinjected in a matter of months if the licence application is successful.

Centrica said it was in “exploratory discussions” with the government about the role that Rough could play in the short or medium term in storing gas to support Britain’s energy independence.

The company closed Rough to fresh injections of gas in 2017 after concluding it would not be “economic” to refurbish the ageing facility, a depleted gasfield 2.7km under the seabed, prompting criticism that it would leave Britain too exposed to volatile international gas markets.

Rough can store enough natural gas to meet the UK’s needs’ for 10 days but it is not expected to operate at full capacity this winter.

The government on Wednesday gave the go-ahead for appraisal drilling to start at a gasfield on the edge of the scenic Surrey Hills.

The controversial decision to approve drilling by UK Oil & Gas was described as “ridiculous” by Jeremy Hunt, the local Tory MP and a former party leadership contender who this week called for prime minister Boris Johnson to quit.

Hunt said: “The government’s decision to allow drilling and fossil fuel exploration in Dunsfold is an utter disgrace and has damaging repercussions for the environment, local businesses and residents.”

Meanwhile Kwasi Kwarteng, business secretary, told the Financial Times he expected between three and six big nuclear power stations to be approved as part of a longer-term move away from fossil fuels. 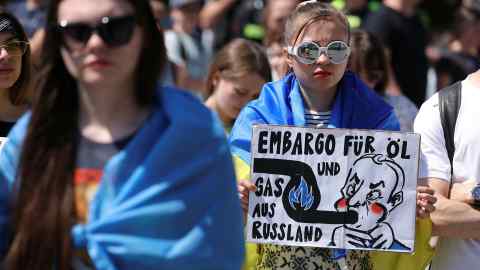 Speaking to the FT Global Boardroom, Kwarteng said he expected a mix of large and small projects to help reach the target of producing 24GW — one quarter of the UK’s expected electricity demand — from nuclear by 2050.

Johnson announced in April “we are bringing nuclear home” and drew considerable scepticism when he added: “One nuclear reactor every year for eight years, rather than one a decade.”

The business secretary said he expected far fewer electricity suppliers to go bust this winter. More than 30 have left the market since January 2021 as soaring wholesale gas prices pushed them to the wall.

“I think this winter we will have more resilience,” Kwarteng said. “Fewer of them are going to go out of the market.” The minister’s allies said that companies still in the market were “well-capitalised and well-hedged”.

Kwarteng, in a wide-ranging interview, said he was “generally opposed to windfall taxes” but was reassured that the levy imposed recently on oil and gas companies contained incentives for investment.

He also said chancellor Rishi Sunak would “make sure the burden of taxation is as light on possible” on business; next year corporation tax will rise from 19 per cent to 25 per cent.

Kwarteng said Sunak would “want to accelerate” plans for a one percentage point income tax cut — scheduled for 2024 — when it was responsible to do so, but acknowledged the risks of fuelling inflation.

Meanwhile, he insisted that Johnson had already bounced back from his brush with political mortality on Monday, when 41 per cent of Tory MPs voted to oust him.

“I don’t think it’s irreparable,” he said. “He’s really got his mojo back, he’s really energised. It’s important we are united as a party. Worst thing that could happen is we split into warring factions.”